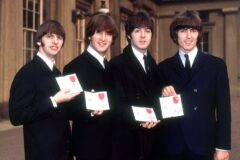 The Beatles, receiving their Member of the Most Excellent Order medals in 1965.

On October 26, 1965, the Beatles received M. B. E.––Members of the Most Excellent Order of the British Empire––medals from Queen Elizabeth II during a formal ceremony at Buckingham Palace. They had previously been allowed to perform for her highness at the Royal Variety show on November 10, 1963, but this was altogether different. Whether it was from the enormity of their sheer commercial impact as cultural ambassadors (they single-handedly propped up the flagging music industry through their newly established demographic of JFK-bereaved record-buying fans) or the amount of taxes they subsequently paid into the royal coffers (the “tax exile” archetype wouldn’t emerge until the Rolling Stones’ ascension), the Beatles were the first pop group to be given the award. Though its prestige was thereafter tarnished in some minds, particularly for previous recipients in non-entertainment sectors, the award was an unmistakable sign that contemporary bands and their culturally catalyzing music were being taken a new kind of seriously, and that it was justifiable for one to hope to improve their financial and social status simply by being in a successful pop group. Though John Lennon returned his M. B. E. in 1969, and George Harrison died in 2001, the remaining rhythm section of Paul McCartney and Ringo Starr have since been knighted, are living legends, and are counted among the wealthiest and most famous musicians––let alone people––on the planet, and deservedly so. But one is now hard-pressed to imagine any contemporary artists earning such distinctions (Sir Harry Stiles? Please.). That train has long since sailed.
************** 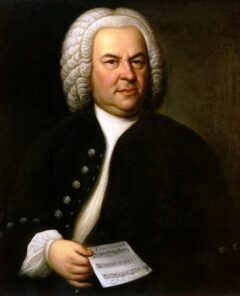 Back in the second half of the second millennium, when it was all about composers and musicians, the former were the only ones who had any shot at an upward trajectory in terms of social standing, lifestyle, and legacy, but it was all contingent on compulsory obtainment of some kind of patronage to even subsist in the arts. Their choices were limited; they either had to take up a parochial position (J. S. Bach did stints as chief organist at various German churches) or secure some kind of royal affiliation or wealthy investor(s)(Domenico Scarlatti was in charge of 18th century Portuguese Princess Maria Barbara’s formative musical education, following her to the Spanish court upon her marriage; Mozart was a child prodigy who performed for royalty and later gained regally affiliated employment in Salzburg; Beethoven enjoyed the sponsorship of Archduke Rudolf of Austria; Tchaikovsky never met his patroness Nadezhda von Meck). And even then, associated with religions, royalty, or wealthy patronage as they may have been, remunerated and honored as they sometimes were, they weren’t necessarily considered to be in the same social caste as their benefactors. When they passed on, their music often endured decades of obscurity, and many of them died penniless, if not drowning in debt.
In the 20th Century, recording technology and the birth and rise of the music, movie, TV, and radio industries changed and expanded the very nature and scope of fame, and subsequently increased the social status of and financial award potential for its participants, who were now able to climb the ladder at least partially through their own efforts. As each fame-fanning industry gathered gravitas, entertainers were able to become just as famous and revered as world leaders, royalty, captains of industry, and politicians due to wider exposure and the increased revenue that came with it. 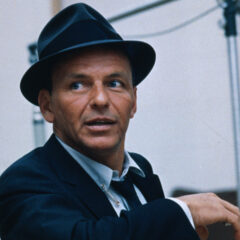