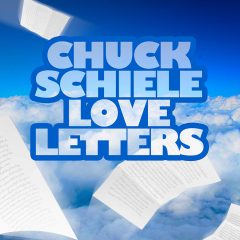 Chuck Schiele is a name familiar in the San Diego music scene, playing since the ’90s in several well-received bands that have included the award-winning Grams, Bad Science Fiction, the Skinny Dippers, and others. He is a bicoastal artist, also playing and recording with Chuck Schiele’s Quatro as well as the Salt City Chill in Syracuse, New York. In addition to playing music, his efforts have included writing about it on both coasts for music magazines, coordinating music festivals, and has been art director and a creative consultant for the San Diego Troubadour for years.

Schiele has produced for various artists and has performed music that spans genres, singing and playing guitar on both original and covers. His latest is Love Letters, a four-track EP of original alternative rock tunes available as a digital download. In addition to Schiele, the players are Simeon Flick on electric guitar, Byron Cage on drums, Edgar Pagan on bass, and Heather Kubacki on vocals. The Covid pandemic dictated that much of the music was recorded in different studios by each player, then combined by producer Schiele. There is a prevailing theme on the project: socially conscious statements about how the world needs fixing.

“Climb” is a mid-tempo tune about striving for a better life, with characters who transcend beyond their limitations to excel—a man and woman who take the opportunity to become something better, “No permission required/ He’s gonna rise like fire.” Like most of the songs, the musical mix is punched up by the interplay of Schiele’s acoustic and Flick’s electric guitars. Next in the program, “Rise Up!’ covers much of the same territory, this time about Schiele’s personal situation. Inspired by Martin Luther King, it is a driving anthem of layered guitars and vocal choruses that build toward some rewarding moments by Flick. Shiele decries a modern society, making Martin Luther roll in his grave while admitting he has “nothing left to save except my soul.”

More social commentary is heard on “Justice,” a drum-powered protest song about the violence and dross on TV and how we are in the process of destroying this world for the children we brought into it. The song has aggressive vocals that push the envelope toward rap, and Flick’s fiery guitar is again ear-catching. “The Big Idea” spends five minutes telling the listener to spend five minutes of their own coming up with ideas that will improve society and again touching on the fate of our children.

Love Letters is a collection of music with a message, packaged as lively rockers by Chuck Schiele, songs to think about while enjoying the listen.