To celebrate July 4, here’s a 1979 home movie of a UC San Diego computer main frame, performing “Stars & Stripes Forever” (tune into the music portion of the video at 6:52)
https://www.youtube.com/watch?v=Ih1psGzLvlw 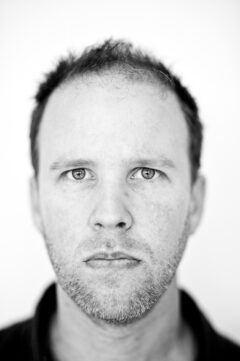 That classic Sousa march, via the whirrings of a 1970’s Control Data CDC 3600 computer, comes courtesy of colleague Pea Hicks.
Hicks is a composer, collector, presenter, performer, and wearer of many hats.
San Diego Troubadour: How did you come across this amazing vintage UC San Diego computer mainframe Sousa march clip????
Pea Hicks: I spend a lot of time combing garage sales and swap meets for orphaned ephemera, such as home movies, slides, photos, and audio recordings. I generally look for items of broad historical interest. This Super 8 film came from the estate of a man who had worked in computer development as well as amateur film for decades. I acquired an entire bin full of his home movies, many of which featured interesting scenes from around San Diego. Some of the films even had sound, which is a relative rarity in home movies in the pre-camcorder era. Social media, such as YouTube, has made it much easier to share things like this with the public, but I’ve also used found materials in more creative contexts for decades.
In the ’90s, I created a CD called Lucas & Friends Discover a World of Sounds, which was a collage of found audio clips, creatively arranged. I’ve also used a lot of found audio material in various theatrical productions. Many of my projects involve “droplifting,” where I create my own found objects (audio recordings, photos, etc.) and place them back into thrift stores, garage sales, and even just out on the street for others to find and be fascinated by. I like to keep the specifics of these projects under wraps, though. The residents had an idea they called “The Theory of Obscurity,” where art must be separated from the artist in order to be fully appreciated on its own merits as art. So that’s what I’m trying to achieve there—making art by creative framing, context manipulation, and perceptual misdirection.
SDT: What is the favorite musical instrument that you have in your personal collection? 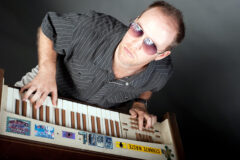 PH: Well, I’m most well-known for my association with the Optigan, which I own several of. This is an oddball type of home organ from the early 1970s that is unique in that it played sounds from LP-sized mylar discs that were encoded with sound, using the same system as an optical film soundtrack. You could play back looped recordings of bands playing in different musical styles and jam along on the keyboard. It was essentially the early ’70s version of Apple’s GarageBand app. You can learn more about it at my website optigan.com. Rob Crow and I also have a band based around the Optigan called Optiganally Yours. You can check out our music at https://urldefense.proofpoint.com/v2/url?u=https-3A__optiganallyyours.bandcamp.com_&d=DwIF-g&c=-35OiAkTchMrZOngvJPOeA&r=wnC9pUsrlxbFU7tWexlhsb25DgfDuTSezD3BkmJWQ1k&m=pgavzKC2dES6GsZcYa__zPPvxaaM6DoI3_-y-ZvJYVI&s=0eTSIo6FPJJSraEeRt3gNyXyAwmq2iq5r9SY-88Jn3A&e= ”
SDT: You were so young when you were suddenly asked to leap into a professional keyboard role in musical theatre that I don’t think you even had a driver’s license. Please give us details of that whirlwind premiere.
PH: I got started in theater when I was a junior in high school. I had been playing keyboards in the youth band at church, and one of the other musicians mentioned to me that a keyboard player friend of his was looking for someone to sub for him for a week on his gig at a show downtown. That show turned out to be the San Diego Repertory Theater’s Six Women with Brain Death or Expiring Minds Want to Know, which at the time was San Diego’s longest-running theatrical production. Probably more out of naive enthusiasm than anything else, I met with the keyboard player and assured him that I was up to the task, though I was pretty sure I wasn’t! I practiced really hard and learned the show, played it for a week, and figured that was the end of it. But a short time later I got the call that the band was being re-shuffled, and they needed me to take up the keyboard part full time. I ended up playing five to six nights a week throughout the summer, and in my senior year of high school, over 500 performances total. I didn’t have much of a social life and had to find my own understudy just so I could go to prom, but I was definitely making more money than my friends, who were mostly working typical minimum wage jobs. And, yes, this was all before I had my driver’s license, so my mom had to take me downtown and pick me up every night.
Anyway, after that show wrapped, I very quickly started getting work with Sledgehammer [Theatre] and other local companies, doing sound design and composition, among other things. My first show with Sledgehammer was their epic unabridged production of Hamlet. Talk about a trial by fire! The show was more than five hours long, really brutal. As a kid, though, I just went along with whatever projects came my way. I still had the luxury of living with my parents and not having bills to pay, so even a $50 stipend or some pizza was enough to keep me going.
SDT: What was the busiest week of your entire career (so far)?
PH: It’s hard to say, but the final week leading up to any theatrical premiere is always very densely packed. I particularly remember tech week for Sledgehammer’s Hamlet, which actually lasted for more like three weeks. Our first full dress run-throughs of that show lasted more than eight hours! We all pretty much lived at the theater trying to get that show up and running. These days I only do theater projects under special circumstances!
SDT: Name a stalled project that you intend to revive at some point.
PH: Years ago Scott Feldsher and I adapted Gertrude Stein’s children’s book, The World Is Round, into a chamber opera. It was originally staged at Skidmore College in New York and again in a revised form as part of a theater workshop festival in Los Angeles. I’ve always wanted to make a final revision of the piece and give it a proper, professional production with a full budget. Maybe someday!
SDT: Will you be returning to the Whistle Stop with live presentations this coming year?
PH: You must be referring to the “Found Film Jam” nights that I used to host. This was a way to make creative public use of all the old home movies I was accumulating. I’d haul some projectors and a box of unseen films down to the Whistle Stop (and other venues), spool them up, and have various musician friends provide improvised accompaniment. Sometimes it worked out great, other times you’d just get five minutes of bad sunset footage and meandering musical noodlings to go along with it! Eventually, though, a projector would catch on fire and there’d be some excitement injected into the proceedings. I don’t currently have plans for more of these types of events, but you never know!
SDT: Who has influenced you the most, professionally?
PH: Musically, I’m most influenced by the minimalist composers such as Philip Glass, Steve Reich, as well as Igor Stravinsky. But I’ve always been very eclectic and have made music in lots of different styles and capacities, so my influences tend to vary widely from project to project. I learned various instruments from other cultures in the UCLA Ethnomusicology Department while I was study composition there, and those influences always find a way into most things I’m working on.
SDT: I enjoy seeing your nature photos on Facebook. I should consider getting out and about! Name your top three favorite hiking locations (that you could bring a beginner on). 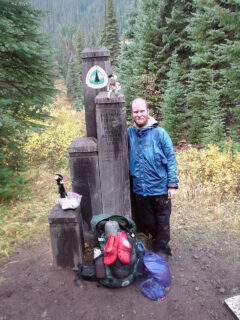 PH: Here in San Diego we have loads of great hiking options year-round, from easy trails to full-on death marches. For beginners, off the top of my head I would recommend Torrey Pines State Reserve, Oak Canyon in Mission Trails Regional Park, and Sunset Trail/Laguna Meadows in Mt. Laguna.

Short Tales from the Mothership