January 2023
Vol. 22, No. 4
Youth Arts Academy Shines Like Superstars at the Music Box by Paul HomiczMay 2022
Back with a Bang! Java Joe's Reunion at San Diego Folk Heritage by J.T. MoringMay 2022
Book Review: The Philosophy of Modern Song by Bob Dylan by Ted BurkeMay 2022
Rick Nash: Bass Man in Demand by Wayne RikerMay 2022
Mod Revivalists the Trebels to Reunite for 40th Anniversary Show by Jim TrageserMay 2022
If Music Be the Food of Love, Play On: Dually Noted Pairs Fine Food and Fine Music by Paul HomiczMay 2022
Harold in the Land of Jazz by Bart MendozaMay 2022
Sephardic Dance and Music by Yale StromMay 2022
Loretta Lynn: A Special Tribute to the Queen of Honky Tonk by Terry Paul RolandMay 2022
Ben Grace Gilmore: It's All About Building Community by Sandé LollisMay 2022
Advertisements

The lights go down at Seattle’s White River Amphitheater, and the spotlights illuminate Taylor Swift and her band entering the stage. Swift waves, and the amphitheater roars with cheers. Or it might be Bruno Mars and Silk Sonic thrilling thousands as they make their great dance moves in Detroit’s Ford Field. Or it might be the Hollywood Palladium filled with adoring fans, as Lizzo returns for one more encore.
Or it might be the Music Box in downtown San Diego. But this time the spotlight focuses on a quintet of 14 and 15-year-olds, and all the cheers are for other local teens and youth; all the excitement is going to be the same as if the headliners were Scary Pockets, Manic Hispanic, or Fleetwood Mac.
On Sunday, June 5, the Music Box will host Commotion, a concert by students at the Youth Arts Academy (YAA). Rock bands, jazz bands, and the full roster of ensembles will perform for this annual fundraiser. 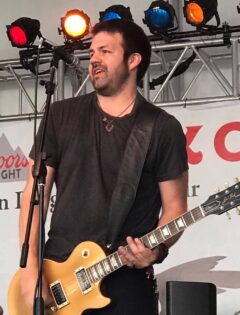 “This is to give the students a taste of what it’s like after they’ve put in the hard work,” says Wilfredo Lopez, program assistant at the academy. The concert is intended to give the students a more professional experience, because they probably aren’t getting on the stages of their high school auditoria. “What you’re going to see are youth shine and get an experience that I did not get when I was their age.”
In previous years, the fundraisers featured only the academy’s rock band students. This year, all the ensembles, all the different rock bands and jazz ensembles, will perform for the show. “All the students will have a chance to soak in the moment,” says Lopez.
Established at the Boys and Girls Clubs in San Dieguito, Youth Arts Academy has been fostering the performing arts education from infants to high school teens with concert bands, jazz bands, rock bands, and private music lessons since its inception in 2007. The educational organization has also taught youngsters and teens in photography, theatre, and other arts. 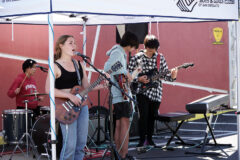 Aspiring young musicians from the program.

The flagship program is the Rock Band Program, in which children learn to find their inner Bruno Mars, inner Dua Lipa, and to explore those possibilities by playing various musical styles in a group setting. They cover hits from the big pop stars and develop their own talents by composing their own music. They also find out what it’s like to record in a studio. The academy also has a group jazz band for students in sixth through 12th grade. The students study various styles of jazz and also learn how to improvise.
Almost all of the instructors at YAA have advanced degrees in music or the performing arts and boast years of experience on stage and in the recording studio. Lopez has been performing as a musician for over ten years, from being a member of a pit orchestra and playing saxophone in a number of jazz bands to playing guitar and bass in a number of bands throughout San Diego. He attended Mesa College, studying jazz performance and recording arts, and San Diego State University. 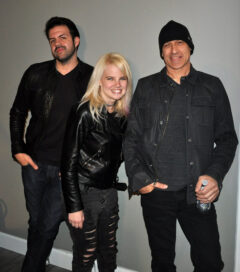 Lopez has been involved with the Youth Arts Academy since 2018, starting as a music instructor and taking over the position of program assistant in October of 2021. “My friend and band mate, Jules Whelpton, had been working here and had been with them for seven or eight years. The guitar instructor had left in 2018, and she told me that I was the first person she thought of to fill the opening.”
Just a stone’s throw from Seaport Village, the Music Box is an upscale venue that features three viewing levels, making for great opportunities to see the show. Nationally renowned performers fill their schedule, as well as some of the best from San Diego. Besides drinks, the menu features casual dining.
“At the academy, we highly encourage that our students take part in their regular school programs like school orchestra, marching band, etc.,” says Lopez. He emphasizes that YAA offers more individual instruction than can be offered to students through their ensembles. “When you join concert band at your school, the school is assuming that you know how to play your instrument. They don’t teach you the basics. They’re not giving one-on-one instruction. The individual instruction, that’s where we shine.
“I think what made me realize that this is the place for me is the way we teach students. There is no set curriculum. Every lesson is specifically made for each individual student. I believe that no two children will learn in the same way. I think that is where a lot of other programs fail. They treat every student like they’re the same, which they are not. Every child learns differently and every child needs some sort of special attention.”

Julian Is Getting a New Town Square! Local Performers Celebrate.

Bohemia After Dark: Claudia Russell and the Intimacy of Radio