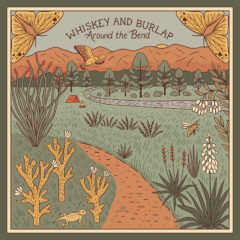 Around the Bend is the debut album from the trio Whiskey and Burlap. It’s a delightful collection of 12 original tracks featuring Camille Sallave (vocals, percussion, banjolele), Ethan van Thillo (mandolin, vocals), and Craig McIntosh (guitar, violin, bass, and vocals), recorded and mixed nicely by Kris Towne at Capricorn Studios in San Diego. There are many things to like throughout, highlighted by the well thought-out arrangements featuring colorful chord sequences from verses to chorus, some unexpected sectional shifts from mellow to rocking out, crescendoing vocal harmonies and a few clever non home key chord endings, all etched around diverse lyrical musing.
Their eclectic musical range from track to track, especially with the absence of drums, yields traditional roots of folk, pop, bluegrass, Gospel, and blues, often classified as Americana these days.
Sallave’s unique lead vocal style shines throughout, complemented tastefully by Thillo’s driving mandolin phrases. However, the group’s two- and three-part golden vocal harmonies carry the day, exquisitely blended and in tune, featured right out of the gate on the opening track, “Why Not.” “Why not say what you want…why not open your heart…why not let love shine in.”
McIntosh makes his soulful lead vocal presence known on “Your Heart Holds Me Here,” and “Its Coming,” a powerful vocal duet with Sallave, with both tunes building to dynamic vocal finishes. Thillo gets featured on lead vocals on “Road of Life,” a cheerful cut with deftly arranged cascading vocal harmony parts. “Birthday candles glowing…gray hair is flowing…I take a deep breath to fight off all the stress.
“It Will Never Be the Same” and “Whiskey & Wine,” a seductive eight-bar blues goody, puts Sallave front and center vocally, augmented by a vamp section of Thillo jamming out on mandolin. “Somedays” is another track highlight, in which Sallave segues midway into some “talkin’ blues.” “I’m not trying to compromise with what you despise…I’m trying to be heard…I’m trying to be counted…trying to be validated.” “Ocotillo Blossom,” a haunting minor-key melody, showcases the three-part vocal harmony once again. “Ocotillo blossom in coyote canyon, hummingbirds sip your nectar…orange of fire that surely calls them, pulling you closer to the earth.”
Two ballads, “Manzanita Bee” and “Season,” nicely contrast the more musically active tracks, spotlighting some of their introspective lyrics. “Manzanita Bee, your buzzing calls me…mahogany tempts me to touch…white lanterns lure me.” And on “Season,” “Come cool winter chill on my face…hush, slow down this time we must face.”
The album ends gracefully with the track, “Winter Wind,” leading with McIntosh’s dulcet violin orchestration before the trio rocks out amid steadily building full three-part harmony choruses, “just when I feel my heart can’t be broken again…you come on home with your haunted eyes…and the sound of a winter wind,” bringing to a close a very successful debut album of well-crafted vocal and instrumental arrangements signaling much to look forward to in the group’s future projects.

THE INNOCENT BYSTANDERS: The Book of Life