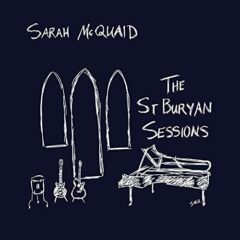 Singer/songwriter Sarah McQuaid is not going to be every person’s cup of tea, especially on her new release, The St. Buryan Sessions, 15 tracks with a total running time of a little over an hour in length. Recorded live in a church in Cornwall, England by Martin Stansbury, with no audience due to Covid-19, McQuaid accompanies her voice, alternating between acoustic guitar and piano, performing mostly all original tunes from her five previous solo albums: When Two Lovers Meet (self-released, 1997), I Won’t Go Home ‘Til Morning (self-released, 2008), The Plum Tree and the Rose (Waterbug Records, 2012), Walking into White (Waterbug Records, 2015), and If We Dig Any Deeper It Could Get Dangerous (Shovel and a Spade Records, 2018).
A busy and popular touring artist, McQuaid’s work has been likened to classic 1970s British folk singers Sandy Denny and Nick Drake, but McQuaid’s haunting and mesmerizing voice will also remind many of Joan Baez and the golden era of solo folk music performers, especially the opening a capella track, “Sweetness And Pain,” with echoes of Baez’s version of “Joe Hill.”
As with most solo singer/songwriters, the lyrics are the primary focus, prominently featured throughout, duly noted in “In Derby Cathedral….I read through the names on the wall and I think of them all….say  a prayer for the souls of the faithful departed….who’ve walked through these halls.” And in “Last Song,” a regret that her mother died a year before the birth of her daughter. “She left this world too soon to ever know you…she never got to see your little face…and I wish with all my heart that she’d lived long enough to hold you.”
McQuaid includes an instrumental guitar ditty, “The Day of Wrath, That Day,” in dropped D tuning, along with a dream like vocal version of the Jazz standard, “Autumn Leaves,” in addition to two well-crafted co-writes with Celtic singer/songwriter Gerry O’Beime, “What Are We Going to Do,” and “The Sun Goes on Rising.” The catchy “One Sparrow Down” and the more upbeat “Yellowstone” blend nicely into the production with subtle pop hints reminiscent of Carole King and Sarah McLachlin’s song stylings, particularly when she accompanies herself on piano.
By today’s standards, very few would be able to endure the length of this album in one sitting, but for those purists of a day gone by where listening to both sides of an album a couple of times through in a calm and peaceful setting while taking in the lyrical ambiance, this is your cup of tea!

WHISKEY AND BURLAP: Around the Bend