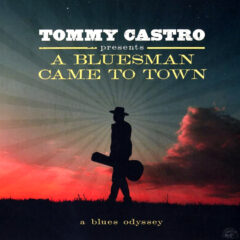 Outside of Jeff Beck, it’s hard to think of a guitarist who’s kept exploring new musical ground into his seventh decade as thoroughly as Tommy Castro.
His new album, Tommy Castro Presents: A Bluesman Came to Town, is organized as a concept album tracing the life and career path of a young blues musician.
Beyond the lyrical arc of the baker’s dozen tracks, though, the music itself is another bold step forward for the 60-something Castro. He’s always written solid blues songs with strong melodies, but on this outing the arrangements are far more complex and sophisticated, providing more interesting hooks and presenting new sides to a melody on each verse.
“Draw the Line,” as just one example, features multiple serpentine guitar lines intertwining behind Kevin McKendree’s slowly percolating groove on keyboards, with Castro’s warm vocals sitting atop all of it. It reminds one of the Atlanta Rhythm Section in its combination of grit, soul, and sophistication.
Elsewhere, “I Wanna Go Back Home” harkens to Otis Redding’s school of Memphis soul, anchored by Deanna Bogart’s smokey solo on sax. The heavy shuffle blues of “Bring It on Back” sounds almost like an outtake from an early Aerosmith session, while “Hustle” borrows from ’70s funk bands (the Soul Train dancers would do this track justice).
It’s not as if Castro doesn’t still sound like Tommy Castro on every track—it’s more that he’s expanding what the Tommy Castro sound is. Several tracks, “I Got Burned,” “Somewhere,” and “Blues Prisoner” would have all fit comfortably on earlier Castro releases, even if the arrangements here are a step up from what is heard on those albums.
Helmed by veteran producer Tom Hambridge (Buddy Guy, Devon Allman), the new album has that clean sound one expects from an Alligator Records release. The guitar solos and fills all benefit from the clean mix, giving them a bright presence that highlights Castro’s jazz-inflected sound. His singing, too, is more confident, more expressive than ever.
All in all, this is the most interesting album Tommy Castro has yet released in a 30-year solo career.
Tommy Castro & the Painkillers perform on January 6 at the Belly Up Tavern in Solana Beach.