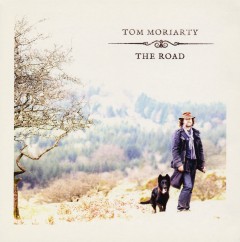 Although a London-based singer-songwriter, Tom Moriarty eerily parallels the vocal styling of a local singer-songwriter of many moons ago, the pride of Hilltop High: Tom Waits. Like Waits, Moriarty’s gruff, graveled voice immediately mesmerizes the listener with its soulful overtones. The Road, a spell-binding ten track disc of thought-provoking lyrics, is Moriarty’s follow up to his 2012 debut release, Fire in the Doll’s House.

All original compositions, Moriarty is quite deft onÂ acousticÂ guitar, joined by a stellar backing band of Rex Horan, bass; Evan Jenkins, drums; Rich Milner, keyboards; and Georgina Leach on violin and backing vocals, with producer Tristan Longworth at the helm. Many of the tunes deal with political, social, and environmental issues, being that Moriarty studied at the London School of Economics. In addition, he completed a one-year stint at Musician’sÂ InstituteÂ in Los Angeles, honing his guitar skills.

The title track opens the festivities, set in a lilting 6/8 rhythm, with Moriarty’s spiritual pleas to help him down the road of life’s journey with good fortune as he initially states: “Please won’t you help me/ I’m a danger to myself.” Two ballads, “Take Everything from Me,” with the lyrics “all I am is what you are” and “Hurricane,” with theÂ repetitiveÂ chorus: “where will you run toÂ now,” speak toÂ forlornÂ love, with rich musicalÂ phrases from Milner’sÂ HammondÂ organ and sweet vocal harmonies from Leach on the latter.

Moriarty dips back into a 6/8 groove for the ominous “Chasing Angels,” highlighted by Jenkin’s nifty syncopated drum patterns, followed by a hypnotic guitar drone on “Me and the Sun,” a commentary on the fragility of life and the environment around us. The upbeat “By Your Side” breaks the mood of some of the somber and serious qualities of the lyrics, and features nice fiddle phrases by Leach and flashy finger-picking guitar by Moriarty. In similar fashion, the uptempo rocker, “Wake Me Up,” showcases Leach again in fiddle mode.

“Wheel of Fortune” is a nice change of pace, a bluesy minor-key goody set against Moriarty’s introspective lyrics, replete with a cappellaÂ moments and a smattering of signature blues guitar licks. Overcoming the fears of a world closing in on us is the theme in “They Sing for You,” a powerful ballad that builds gradually with a full orchestral chorusÂ ofÂ strings and keys to the finish.

The final song, “Rise Again,” has Moriarty alone in the spotlight, accompanying himself with a slick finger-picking pattern against some tasty chord changes, proclaiming that under the worst of circumstances, hope and optimism will eventually rise again if we all stay on that road well-traveled and be true to ourselves, a fitting ending to a ten track journey of well-crafted songs and intelligent musical arrangements.