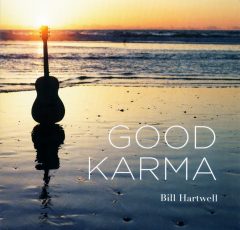 Good Karma is the third CD by Bill Hartwell, a country-roots singer/songwriter whose last offering, 2014’s The Road I’m On, impressed as a batch blending some keen observational ballads, social commentary, an overall comfortable and confident presentation by a veteran player combining good guitar and vocal skills with a collection of interesting and personal music.

His new one follows the same formula, as Hartwell doesn’t seem to be shooting for country superstardom here, but he writes songs that are soothing and flow like a country stream. His strengths are his handiness with an acoustic guitar, lyrics, and his deep and earnest vocals. Some of the 12 tunes here have fleshed-out production, but the organ and light drums don’t get in the way, and throughout Hartwell is the in the spotlight on a pristinely made recording.

Hartwell starts off with “Maybe I,” and he is a rodeo rider who is experiencing being thrown by both a stubborn bronco and his lover. It’s the kind of pleasant acoustic country balladry that he specializes in, as he floats above the shimmering guitar picking to tell about how he might be faced with walking away from his dream: “I guess all of those who told me no are gonna win.” Social concerns don’t take long to be addressed on “On This Bridge.” Nice harmonies and minor chords mark the first-person tale of a dispossessed veteran, back from the Near East morass and lost in PTSD; Hartwell’s lyrics about him walking on a bridge that might be his life hit the mark with some sharp metaphors.

“So It Goes” again goes after the state of the world and takes a different approach than most of the album and still clicks; it has a jazzy rhythm with electric guitar and some nice percussion. The words are observational about the state of the world–media, inequality, politicians–Hartwell in this six-minute highlight doesn’t leave out many targets and has the listener’s foot tapping the entire time. On a lighter note, he comes back with “Celebrity,” a quirky shuffle that tells of having an “ego the size of an SUV,” and sending up that plastic part of our culture; it is biting criticism barely disguised as satire when he talks about how “babies seem to make the best accessories.”

Of Hartwell’s soft, folk-style tunes, and there are several, perhaps the best is “Magic of the Mind.” He weaves a simple folk melody with pleasing fingerpicked figures, while telling how everyone, including Hemingway and Einstein, has dreams and imagination, and that the secrets of the mind are the key to limitless voyages–another tune with strong lyrics. A darker trip is in store on “Power of Fear,” as Hartwell makes no bones about going after the politically powerful in a somber protest song that simply says that power is addictive and those who run things control what you believe with fear. It’s an arresting song that is painfully accurate.