February 2023
Vol. 22, No. 5
Tom Griesgraber and Bert Lams: Evolution of a Recording by Paul HormickJanuary 2014
Jeff Beck: A Tribute by Ted BurkeJanuary 2014
Marcus Petronius Bashore: The Best Seat in the House by T.E. MattoxJanuary 2014
Pacific Wave: A Surfin’ Safari January 2014
The Winter Dance Party 1959: The Night the Music Lived by Terry RolandJanuary 2014
Back with a Bang! Java Joe's Reunion at San Diego Folk Heritage by J.T. MoringJanuary 2014
Book Review: The Philosophy of Modern Song by Bob Dylan by Ted BurkeJanuary 2014
Rick Nash: Bass Man in Demand by Wayne RikerJanuary 2014
If Music Be the Food of Love, Play On: Dually Noted Pairs Fine Food and Fine Music by Paul HomiczJanuary 2014
Mod Revivalists the Trebels to Reunite for 40th Anniversary Show by Jim TrageserJanuary 2014
Advertisements 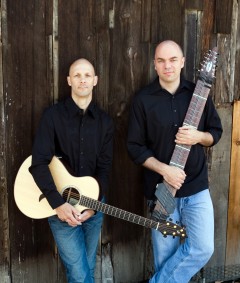 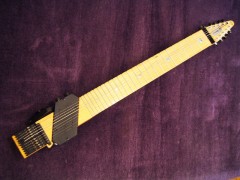 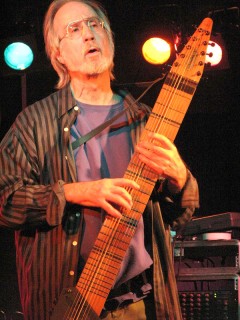 A generation after Columbia Records introduced the Long Play (or LP) record in 1948, rock performers advanced the format far beyond that of just collecting a number of songs on two sides of vinyl. The Beatles and other bands came up with “concept” albums, such as Sergeant Pepper’s Lonely Hearts Club Band, which were meant to be listened to, or at least thought of, as a complete whole. The Who’s Tommy, Andrew Lloyd-Webber’s first big splash, Jesus Christ Superstar, and other “rock operas” transformed the LP’s capabilities.

In these times of mp3 downloads, however, the whole idea of treating a recording release as a concept has gone the way of platform heels and bell-bottomed blue jeans. Musicians just don’t make concept recordings or CDs anymore.

That is except for Tom Griesgraber and Bert Lams.

The Encinitas-based Griesgraber and California Guitar Trio alum Lams have released an ambitions recording creation. Complete with a booklet of narratives and artwork, their CD collaboration Unnamed Lands (reviewed this issue) gives us a story of a mid-nineteenth century journey across this great continent. It’s all here: the horses, wagons, and wide-open spaces. All that might be missing is John Wayne.

The two musicians got the ball rolling on the project with a Kickstarter campaign, but the genesis for this CD goes back much further. The two met when they were both performing for a show up at the Coach House north of here in San Juan Capistrano. Griesgraber had his band Agent 22 and Lams was appearing with the California Guitar Trio. The two met, hit it off, and decided that they would like to try working together.

Their collaboration started with Griesgraber, who plays an instrument known as the Chapman Stick (See the accompanying sidebar), opening for the California Guitar Trio on a few occasions. They recorded together soon afterward. When Griesgraber released his CD Victor’s Chase, the California Guitar Trio added background for one of the tunes, “A Whisper in the Thunder,” on the disk.

Griesgraber is a world-renowned Stick player who has received accolades from the recording industry as well as others who have mastered this new and unusual instrument. Emmett Chapman, the inventor of the Stick, has said of Griesgraber, “I’m proud to see one of my instruments used in such a creative way. Many thanks to Tom for an outstanding contribution.”

In 2004 Griesgraber wound up, luckily, being hired for a series of performances at the San Diego County Fair. Unluckily, there were perhaps too many gigs, with Griesgraber performing six hours a day for the entire 21 days of the fair. To help him through this Herculean task, Lams drove down from Los Angeles, where he was living at the time, and served as something of a relief act for Griesgraber, filling in while the Stick player rested up from the grueling schedule.

Keeping the collaboration going, the two played a date at Dizzy’s, San Diego’s prime spot for the best music, each performing some of their solo pieces and trading off their performances. They also played a few pieces together. As it was obvious to both of them that their duos received the greatest reaction from the audience, it was imperative for them to more fully integrate their talents.

They released a live recording of a performance at the Museum of Making Music, but they knew they needed to put out a studio recording. To cook up ideas for the music, Griesgraber and Lams put themselves in Griesgraber’s studio, hit the record button, and began playing. Later, playing back the audio of their impromptu sessions, the two listened for the moments that worked and the musical ideas that could be developed from the recordings.

Lams suggested that the entire record should comprise only the contributions of Griesgraber and himself. There would be no additional drums, ukuleles, trumpets, or accordions on the CD. “It drove me and Bert to play in a different fashion. Everything had to come from just the two of us. If we wanted to have a driving rhythm, one of us had to be the rhythm section,” said Griesgraber. “And we took the idea a step further and thought, ‘Let’s not get so deep into overdubs or studio trickery that the two of us can’t perform this material live.”

To ensure the success of the recording, once they firmed up the compositions for the CD they took the show on the road. They toured the United States, playing at the full gamut of performance spaces — they played music stores, big stages, house concerts, and even performed next to the espresso machine in a few coffee shops. They performed the Paddock Stage at the San Diego County Fair after the jalapeÃ±o eating contest.

Playing these compositions again and again in different settings allowed Griesgraber and Lams to get to know their music backwards and forwards. Nonetheless, the two musicians still wound up switching things around a lot on the tour, still experimenting with the tunes and keeping things fresh for themselves.

With the one of the pieces of music, “Prairie Suite,” a story began to emerge in Griesgraber’s mind, a story of pioneers journeying across this country. While they were mixing the music with Howard Givens at his Spotted Peccary studio, Griesgraber shared his idea with the music engineer. “His reaction was priceless,” he says. “I remember that we were sitting in his control room, and he was facing me in front of the mixing console. I got a little nervous telling him the story. He just had this blank expression, this look on his face. And I remember thinking, ‘Oh boy, he either really, really likes this, or he thinks I’m really off my rocker now.’”

Fortunately, Givens’ reaction was the former, not the latter. He encouraged Griesgraber to read up on the lives of the pioneers and the journeys that they took across this country some 150 years ago. Griesgraber dove into book after book about the 19th century and the journeys of pioneers across the Appalachian Mountains, across the Great Plains, and over the Rockies. Much of the material for the CD was inspired by Randolph B. Macy’s The Prairie Traveler: The 1859 Handbook for Westbound Pioneers. Griesgraber said that Macy covered just about everything that somebody might need or need to know to successfully cross the country at that time, from fixing wagon wheels to interactions with Native Americans. “He actually made this journey five or six times,” he adds.

After looking into Macy’s and others’ accounts of the pioneers’ journey west, the idea of turning the CD into something of a musical travelogue started to take off from there. The “Prairie Suite” became a depiction of travelers weathering a storm in the middle of nowhere; other compositions started to fit into musical descriptions of smoke signals and letters home. A humorous piece became “Vaquero,” with something of a Mexican theme. A bit of dissonance that Griesgraber chanced across while playing his stick was used to represent smoke or fire.

People have been giving the thumbs up for Unnamed Lands. Amazon reviews have been in the four and five star range. And Emmett Chapman, the inventor of the stick has said, “I am struck by its sheer beauty and musical sophistication. I’m also very impressed with the whole production.”

What Is a Chapman Stick, Anyway?
Let’s start way, way back, even before Prometheus gave the gift of electricity to guitar players, before there was Les Paul, or Leo Fender, or Joe Satriani, when God was in His heaven and all instruments were acoustic. The beginnings of the Chapman Stick go back to those days.

Back then, one of the techniques developed by guitarists, as well as other string players, was the hammer-on. Without plucking by the right hand, the guitarist places a finger of the left hand firmly against the fingerboard, simultaneously fretting the instrument and imparting enough energy to the string to produce a note. That is a hammer-on. It is part of the classical guitar technique, and you can hear Segovia and other classical guitarists use this on classical recordings.

The next development in the story of the Chapman Stick (or as it is most often called, the Stick) is the invention and popularization of the electric guitar. The Stick, in essence is a variation on this instrument that uses the vibration of metal strings to induce a variation in energy of magnetic pickups to produce tones that are made audible by an electronic amplifier and speakers.

Okay, back to the hammer-ons. In time guitarists extended the hammer-on technique to the right hand. It is believed that Tal Farlow, a brilliant jazz guitarist, was the first musician to incorporate the right hand in producing hammer-ons, which enhanced his already brilliant speed. Though the right hand hammer-on was developed in jazz, it was rock guitarists that most enthusiastically adopted the technique. Among rock’s most noted performers are Eddie Van Halen and Jennifer Batten. The notable exception to this rule is Stanley Jordan, who plays jazz, incorporating right and left hand hammer-ons.

Right and left hand hammer-on is a long bit of terminology, and musicians have grown comfortable calling the technique tapping. Tapping expanded the capabilities of the electric guitar. Guitarists could more easily play melodies while executing bass lines. And a guitarist could supercharge his lightning-fast lines into greased lightning super fast lines.

And yet ultimately the electric guitar is not designed to be played in a two-hand tapping technique. In the sixties guitarist Emmett Chapman had been tapping in his performances for some time when he started working on his Stick invention, an instrument designed specifically to be played by the two-handed tapping technique. As the instrument was to be electric and amplified, no acoustic chamber was needed, so thus the simple stick design. Chapman came up with an initial prototype of his idea around 1970. By 1974 he had released the Chapman Stick for production and sales. The year also saw his television debut with his invention on the game show “What’s My Line?”

Sticks actually look like boards, boards with lots of frets all over them. They most commonly have 10 strings, five bass strings, and five that are in the higher registers. There are also eight-string models and even a 12-string model. The bass strings are usually tapped with the left hand and are tuned in fifths, like a cello. The higher register strings are tuned in fourths, like the guitar, and are usually tapped with the right hand. The stick is held in place by a strap over the musician’s shoulder and hangs at an angle to his body.

Well, we’ve been talking strings and guitars, but because the instrument lends itself to the performance of bass, chording, and melody, it is most often compared to keyboard instruments. The way they sound reminds me of harpsichords. Unlike harpsichords and pianos, however, Chapman Stick players can bend notes, like a guitarist. If you put Chapman Stick into a YouTube search, you’ll get plenty of videos of folks playing this new and unusual instrument.

Growing Up in Public: The Casbah Turns 25