February 2023
Vol. 22, No. 5
Growing Up in Public: The Casbah Turns 25 by Jon KanisJanuary 2014
Jeff Beck: A Tribute by Ted BurkeJanuary 2014
Marcus Petronius Bashore: The Best Seat in the House by T.E. MattoxJanuary 2014
Pacific Wave: A Surfin’ Safari January 2014
The Winter Dance Party 1959: The Night the Music Lived by Terry RolandJanuary 2014
Back with a Bang! Java Joe's Reunion at San Diego Folk Heritage by J.T. MoringJanuary 2014
Book Review: The Philosophy of Modern Song by Bob Dylan by Ted BurkeJanuary 2014
Rick Nash: Bass Man in Demand by Wayne RikerJanuary 2014
Mod Revivalists the Trebels to Reunite for 40th Anniversary Show by Jim TrageserJanuary 2014
If Music Be the Food of Love, Play On: Dually Noted Pairs Fine Food and Fine Music by Paul HomiczJanuary 2014
Advertisements 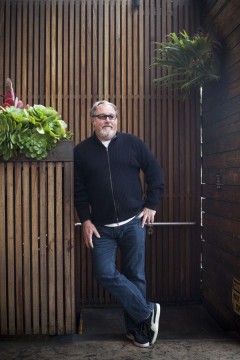 Who knows where the time goes? As another calendar year begins so does the realization that it has been two and a half decades since the premier rock venue in town, the Casbah, first opened its doors. More than any other club in the city of San Diego, the Casbah has presented the ideal blend of local, regional, national, and international music acts, providing San Diego with some of its most memorable concerts over the last 25 years. In a business that is rarely equated with “respectability,” the Casbah has become a veritable institution in our fair city, thanks to the tireless efforts, vision, and savvy of owner Tim Mays and his staff of relentless renegades who keep the party rocking seven days a week.

Throughout the month of January the Casbah is celebrating its 25th anniversary with a slew of special performances, including a mind-boggling, sold-out double bill and reunion of two legendary San Diego bands on January 10: the Rugburns and the Truckee Brothers. January 3 will feature long-time local favorites the Paladins with Big Sandy and His Flyrite Boys, and on January 17 San Diego’s finest, the Penetrators, will be joined by the Loons and Sidewalk Scene. For a complete schedule check out the venue’s website at casbahmusic.com.

Even though he’s never been a musician or written a song, concert promoter and Casbah owner Tim Mays has been an incalculable influence on San Diego music, as evidenced by the fact that the city of San Diego is declaring January 14 to be Casbah Day — proving that if you persevere long enough, even punk rockers eventually become a part of the establishment. In honor of this milestone Mr. Mays sat down to reflect upon the past few decades of changes in the San Diego music community.

When you started the Casbah in 1994 did you imagine that you would still be doing this 25 years later?
No. I had been promoting shows since the early ’80s, doing punk rock shows — I never thought that it would be a career. I was just doing it because I wanted to see some bands that weren’t coming to San Diego.

Your first club, the Pink Panther, was open from December of ’86 through December of ’89?
Yes, there was an overlap of about a year where we had both the Casbah and the Pink Panther. Our original plan with the Casbah was just to have local R&B, folk, and rockabilly stuff going on and after a few months the floodgates opened. Harlan Schiffman, who was putting on a lot of shows at Iguanas and Brick-By-Brick at the time, started calling, wanting to book bands here. He’s the one who booked Nirvana and Smashing Pumpkins in the second year that we were open and then booking agents started calling and the next thing you know we were having rock bands six, seven nights a week.

The original Casbah was just up the street…
2812 Kettner Blvd., where the Kava Lounge is now.

Which became Velvet after the original Casbah moved to its current location…
Velvet, Crow Bar, Pirate’s Den, Kava Lounge. Yeah, it’s been a lot of different things over the years. There was a year in ’89 where we owned both of them and then we lost our lease on the Pink Panther so we just concentrated on the Casbah and started booking bands on a full-time basis. In 1990 a lot of the San Diego bands started coming up like Rocket from the Crypt and Fishwife. aMiniature and rust and Inch and Honeyglaze and Burning Hands. Then we kind of outgrew that place, the capacity was only 75 and we’d stuff about 150 people in there. By ’93 or so we were thinking that the place was too small so we were looking to expand. There was a radiator shop next door and we were originally thinking that we’d just expand sideways. But then I got a call about this place being available (2501 Kettner Blvd.), which at the time was a lesbian bar called Club. And before that it had been originally a gay men’s leather bar called Bulc. And then that sold and the woman who ran the place just flipped the name around and Bulc became Club. Lack of imagination, I guess…

But she was losing money hand over fist and so the place went up for sale. We came in and had a full liquor license with a much bigger capacity. So we took over here in late ’93, spent a month and a half renovating and we opened in ’94. And it doesn’t seem like 25 years. You keep going and it keeps getting better.

What do you think is unique about San Diego, both as a town and as a music scene?
Well, as a music scene that’s a tough one. As a town, the weather here is just the best in the country. It enables you to do so many things — which, regarding the music scene, maybe isn’t the best thing because there are a lot of distractions, a lot of things you can be doing that aren’t conducive to music. But we’ve gone through so many different scenes here over the years. A bunch of people who are like-minded, friends and groups of friends will start playing, they’ll form bands and they’ll go out and see the bands and they’ll see all their friends play. Then they all get older and they get families and they get real jobs and they just stop going out. And then a whole new crop keeps coming up. For 15 or 20 years that we were open there weren’t a lot of clubs in town. There were only a few. When we first opened it was the Casbah, Bodies, the Spirit Club, which became Brick-by-Brick around the time when Bodies closed. Little places would pop up here and there but now there are a lot of them and so there are a lot of places for bands to play and it seems like there’s always some kid who wants to form a band; he starts playing and then turns 21 and he starts going to clubs. That’s the beauty of it, everyday somebody has a 21st birthday and becomes a new patron of here or the Soda Bar or the Void or what have you.

How much longer do you think you’re going to be in this game?
I don’t know. We’ve got through 2017 here on our lease.

Are you still pretty hands on with everything?
Oh yeah, I do probably 90 percent of the booking of the bands, not only here but all the shows we do outside: the Belly Up Tavern, House of Blues, Spreckels Theatre, SOMA. I do all of that stuff pretty much, even though I’ve got a couple of people who help me — Tim Pyles mostly.

Could you see a time where you still had the Casbah running but you took less of a day-to-day interest?
Yeah, it’s all a matter of… the whole booking thing; it’s hard to teach somebody that. You’ve just got to go out and do it and start working on it. You know, you learn some financial lessons over the years [laughs].

What are the most important ones that you’ve learned?
Well, back in the original days I would just book stuff because I wanted to see it. I way overpaid…. there’s no formula, that’s the whole thing, there’s no way to figure out what a band’s worth. I mean, a band that you think should do really well will bomb sometimes and other bands [do great business], which we’re completely surprised about. You can’t teach somebody how to book bands. It’s easy to book what you like but to keep a club going seven nights a week you’ve got to book what people like too. And it’s got to be a big mix. We haven’t done much reggae at all over the years and we don’t do a lot of hair metal rock kind of stuff but everything else we’ve done and it’s been important. For years we did a lot of rockabilly. It’s not as popular as it was say ten years ago but we did a lot of that. Jazz every now and then and a lot of roots and R&B — whatever’s out there.

Are there any of the shows coming up for the anniversary series that you’re particularly looking forward to?
Oh man, there are so many. The Paladins, the Dragons, No Knife, X, the Rugburns, the Penetrators.

X is playing?
Yes, we couldn’t announce it until after the Belly Up show sold out Saturday — they’re playing on the 16th. X is probably one of my favorite bands going back to the early ’80s. Rocket from the Crypt is playing here on January 31, they’re one of my local favorites. That show sold out in two minutes! It was insane, it went on sale last Friday at noon and by 12:03 all the tickets were gone. We’re trying to talk them into a second night but I don’t know if it’s going to happen or not.

Shepard Fairey is doing a special image for the 25th anniversary?
We’ve got a piece of his on the wall right here [points to the giant Obey/Mao poster]. He did a t-shirt for us in the early 2000s, which are long gone, and so I just decided to ask him if he would be interested in doing another and he just got back to me saying that he’d love to do it. I haven’t seen anything as of yet, but I trust that whatever he’s going to give us we’re going to take, you know? [laughs]

You’re also doing a special night at the North Park Theatre?
Yes, we are doing a thing over there on the 23rd of January, it’s going to be 25 Years of the Casbah: An Evening with Tim Mays and Friends. A woman named Leslee Schaffer is putting it together with special guests coming up — with anecdotes and showing video and photos and slides and all sorts of stuff.

And then there’s Casbah Day on January 14th.
Yes. Rosie who does PR for us is pretty tight with Todd Gloria’s office and she casually mentioned it to them one day. They decided to spearhead the thing and Todd Gloria’s assistant is a big fan of the Casbah so they helped to get the thing put through.
As far as I know it is open to the public, we’re going to go down there and the city council’s going to make a proclamation and they’re going to hand me a plaque. I don’t think there’s big scissors or a ribbon or anything like that or a giant key to the city or something — THAT would be cool.

Well, it looks like January is going to be a very busy month. Congratulations and continued success, Tim.
Thanks.

Tom Griesgraber and Bert Lams: Evolution of a Recording