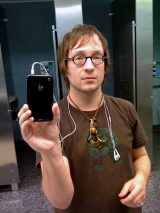 It’s been said that if you look hard enough you can find just about anything at the San Diego Comic Con. While I’ve never intentionally put that theory to the test, while milling aimlessly about on the showroom floor at this past summer’s gathering I chanced upon Thomas Negovan, dressed in vintage finery, standing next to a very old phonograph. He was drawing a crowd with the device and sparking a conversation, I was astounded to hear that the Chicago-based author, art historian, and musician would be releasing home recordings soon. New music isn’t news in itself these days, even when it’s vintage-styled and played authentically. What sets Negovan apart from his peers is the method by which he planned to release his next single: on a wax cylinder.

In a world where the cassettes or 8-tracks of our own youth are already considered archaic, this seemed to go significantly against the grain but in truth is the ultimate response to the problem of having too many options.

For Negovan, like a growing number of artists, sonically speaking, less is more. “I was overwhelmed by the infinite options that digital technology was providing,” he explained. “I basically had a ‘Walden moment’ where I felt I needed to strip away everything extraneous to the soul of the songs I was trying to document.”

Recorded entirely without electricity, Negovan plays his music down the cone of a 19th-century wax cylinder recorder, printing the music on the wax cylinder as he performs. No overdubbing or restarts are possible. Invented by Thomas Edison in 1877, the wax cylinder made musical performance portable for the first time. Cylinders were commercially available from the 1880s through 1929. As difficult as making the music sound right is, just obtaining the materials is difficult. “There’s only one person on the planet making wax cylinders the way they did in the 1890s,” he said. “Luckily for me he was only two hours from my home. He’s a mad scientist named Shawn Borri, and when he was four years old he used to draw lines on the leftover toilet paper cardboard tubes as if they were wax cylinders. Meanwhile, there is only one place to get the cylinders reproduced, and that’s in the UK. He points out that luckily for shipping, the finished cylinders aren’t as fragile as one might think. “The ones we record on are very soft, but the ones manufactured in the UK are pretty much like a record — breakable, but you have to work at it!”

Negovan is realistic about sales potential. To cover his bases, the music will also be released on 10″ vinyl, titled By Popular Demand. “We wanted it to look like an old 78 rpm record,” he said. “basically, it’s for anyone who wants to unplug and have a quiet moment with some sound poems. It’s like a sonic time machine.” The cylinders are limited to 500 copies. Is there much of a market for this? “I don’t think there is [laughs]. People love seeing it, but not many people own an old Edison cylinder player.”

Due to the cylinders’ limitations, the length of a song was an important criteria. “I could only record up to two minutes and 15 seconds on a wax cylinder, so I had to choose songs that could be edited down to that length. That is a much shorter time than you realize. It was an exercise in really defining the point of the song, and I found eight songs that I was able to get the message across in that short window when the wax was spinning.”

He points out while the recording process is vintage and the performing style echoes the likes of an old Robert Johnson 78 rpm single, the songs are new. The modern touch extends to a special Halloween wax cylinder. “I recorded Alice Cooper’s Welcome to My Nightmare as a single and am releasing it on a special glow-in-the-dark wax cylinder,” he said. “I was tempted to pull out some old 1920s’ song to record on wax cylinder, but taking the Alice Cooper song and reinterpreting it like an old Robert Johnson song about descending into madness, using that 19th century recording technology, felt like a way to bridge the gap between the 19th and 21st centuries,” Negovan commented.

Both singles are being collected on a special glow in the dark 10″ record that should be out before the end of the year.

So far the public’s response to Negovan’s display of retro recording technology has been overwhelmingly positive. “No one has had a middle of the road reaction, no one has had a negative reaction. Everyone is amazed by this hand-cranked machine of wood and leather and iron pouring out these warm sounds. It’s the polar opposite of the iPod; this takes a lot of muscle to move around, and people visibly appreciate the spectacle of it.”

For Negovan, this project has been an eye opener. “As a culture we throw away technology as fast as we make it without ever really considering its value,” he said. “Making a record in the earliest invented manner possible put me in touch with the heart of using technology, for bettering my life and work, not as a fashion accessory.” he muses. “Why do we so desperately need this new thing we didn’t even know about yesterday? We survived without something but as soon as it’s announced we can’t live without it. It’s only based on money and insecurity and boredom, and I feel like those lures are completely burned out of my system. It’s a good feeling; it makes me look at our modern technology in a completely fresh light, seeing them as tools rather than distractions, which inspires me to get the most out of them,” he explained. “I’m excited to see how that evolves in myself with the creation of more music.”

While the likelyhood of having wax cylinders make any sort of meaningful comeback as a sound carrier are slim and none, Negovan considers it important to preserve knowledge of the process and its results. “It’s important to remember our history,” he said. “I think that when we can empathize with people who lived in other time periods it expands our view of our own circumstances.” www.facebook.com/thomasnegovan

Whitney Shay: A Passion for the Stage