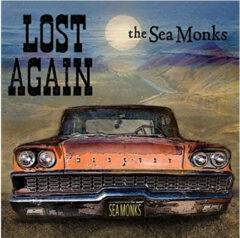 This assured and rocking sophomore effort from San Diego’s Sea Monks shows just how far the family band has progressed since their first release, Gasoline, in 2019. Digitally released on April 1, 2021 (no joke!), the new Sea Monks effort is more assured and muscular, with more original tunes, fewer covers, and deeper lyrics. The band played some of these tracks at live shows just before the pandemic hit. The time off from live performing gave the group time to tighten up and add extra instrumentation and guest artists for these songs.
From the first few seconds of “Continental Club” to the last note of “Mama Tokus,” the band shows its chops with confidence and swagger. Eight of the release’s 11 tracks are originals, compared to just four on Gasoline. With each listening, the Sea Monks’ new release grows, expands, and becomes more powerful.
I’m not too into defining genres… the internet says this band is country, rockabilly, blues… but it’s so much more. It’s also rock. It’s jazzy. It’s Ameripolitan. It’s Bob Dylan-ish and Johnny Cash-like in moments in its lyrics and vocal tone, respectively.
As dual lead guitarist Jeff Houck says, “This is much more than “just a rockabilly album.”
Just 18 years old, Noah Kapchinske already knows that alternative facts are lies. His antidote? Just tell the straight truth. Check out this verse from the title track:

1. Continental Club
The tune that kicks off this collection of tunes showcases two of the Sea Monks’ greatest inspirations: Dale Watson and Austin’s Continental Club. This swinging number makes you get up out of your seat and tap your feet. Autobiographical, the song tells the story about the band’s opportunity to play with Watson at the iconic venue. (The club is currently closed because of Covid-19 but is scheduled to reopen on June 4, 2021).

Lead guitarist and singer Noah Kapchinske takes the first solo, then his friend Piatt Pund jumps in on fiddle, followed by “Uncle” Jeff Houck with his B-Bender guitar. Noah’s father Jason sings background vocals, while his younger brother Kai keeps a steady backbeat on drums. I can see urban cowboys and gals dancing to this tune… and trying to keep up!

2. Lava Lamp
A combination of blues, rockabilly, swing, R&B, and country twang, this tune reminds me of southern culture (in a good way) on the skids. (Add a female vocalist for the live version, boys!) Two more great guitar solos by Noah Kapchinske and Jeff Houck, respectively.

3. Lost Again
Noah Kapchinske’s low-register vocals here remind you of a young Johnny Cash… a young man who’s had enough false prophets and phony TV pundits who lie to his face. This is a song to play on a road trip…The narrator has a car, gum in his pocket, and friends to see in Ohio. What more does he need? Get lost? It’s not an insult. It’s a plan.
4. Katy
I’ve heard this song live many times before I read the lyrics. I’m a guy who likes to read the lyrics so I’m not misinterpreting anything. Frankly, I had no idea what this song was about. Now that I do, it’s even better. A speedy fiddle solo by Piatt Pund kicks the song off, and Noah ends the song a kazoo solo. Funky!

5. Alkonost
Following up on the mythical background of the band’s name, an Alkonost is a woman-headed bird from Russian legend that makes amazingly beautiful sounds, and those who hear these sounds forget everything they know and want nothing more ever again. A nice change of pace, this tune slows things down a bit, with Piatt Pund playing lyrical violin and singing high harmonies.

“I wish I had a good story about coming up with Alkonost,” Noah Kapchinske said. “I learned about the legend online by accident and tried to incorporate it into my song.”

A single rain shower can feed the wildflowers
And drown and devour a pawn or a king
Your tall silver tower’s an illusion of power
And if you can’t swim, sir, it ain’t worth a thing

“We decided to cover cheeseburgers because we’re all huge fans of Blaze Foley, a super underrated songwriter who died too young,” Noah Kapchinske said.
“It was really cool to have Noah and Kai’s young musician friends, Piatt Pund and Madeline Lynch, work with us on the album,” Jason Kapchinske, Noah’s father, said. “And it was cool to have (wife and mom) Pam Kapchinske come into the studio and record some foot stomps and hand claps with us on ‘Big Cheeseburgers.’ We have the whole family making noise on that one.”

I got an angel of woman wit

7. The News
A fast, driving, short and sweet song with passionate vocals. Rocking!

8. Seattle
A swinging country dance song that my parents might have hoofed to during their square-dance days. Jazzy, too! Evocative and fun.

9. Rhyolite & Gasoline…
Slow, perfectly paced, and beautiful. I’ve added it to my list of the best songs I’ve ever heard. This song has “legs.” I believe that it will stand the test of time. I can see this being in a soundtrack to a great movie that I really want to see. Noah Kapchinske plays the lead guitar solos.

10: Jackson
Keeping Johnny Cash alive, this is Ameripolitan music at its youngest and freshest. In addition to great guitar work, Madeline Lynch’s vocals are a great counterpoint to Noah Kapchinske’s.
“We decided to cover Jackson to show off our good friend Madeline, who I played with in Mission Bay High School’s Preservationists Jazz Band,” said Kapchinske.
11. Mama Tokus theme
The CD ends with a tune written by Robin Henkel, who is also Noah Kapchinske’s guitar teacher.
“I never met the real Mama Tokus, but she’s a friend of Robin Henkel’s,” said Noah Kapchinske. “There’s a video on YouTube called ‘Cooking with Mama Tokus’ with her boiling a sheep’s head to take the skin off the skull. I have always loved that song for the clever lyrics and deep groove. I’ve also wanted to cover one of Robin’s songs with the Sea Monks for a while. He’s such a legendary figure in the San Diego scene, and he has taught me so much.”
“I really like the originals Noah wrote, and the originals we developed as a family,” said Noah’s dad, Jason. “It was cool to record a little of Robin Henkel’s material, since he has been Noah’s teacher for a decade and is a super cool guy.”
Jeff Houck, the Sea Monk’s second lead guitarist, was deeply involved in the CD’s production.
“Jeff spent a lot of time studying how professional records in this genre are mixed, and we spent several full days working on the volume of individual tracks and how the tracks are panned (left or right speaker),” Noah Kapchinske said. “This is stuff I wouldn’t have spent a lot of time on without Jeff’s help and input. Also, almost half of the guitar tracks (both mine and Jeff’s) were recorded in his home studio, Casa de Houck. Jeff’s involvement made the record a lot more polished compared to Gasoline without sacrificing the rawness.”
“Jeff Houck played a huge role in the mixing, along with Noah and Alan Sanderson,” Jason Kapchinske added. “We had fun making this album.”
You’ll have fun listening to it.