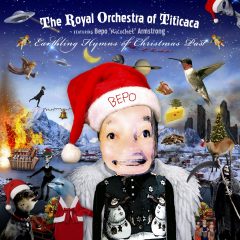 Describing it as a collection of “Christmas tunes for heathens,” local stalwart Marcelo Radulovich (Playground Slap, Gunther’s Grass, Mike Keneally) has released a disarmingly disparate collection of re-imagined holiday favorites that sound like nothing else you’ve ever heard.

Ranging from a post-punk melancholy to art of noise effects to occasionally pure vocals and acoustic accompaniment that surprise in their unexpectedness, the 10 songs (four of the 14 tracks are short connective interludes) are consistently imaginative in their arrangements, generally fun and definitely a different take on holiday music.

The manic electronic vibe of “Deck the Halls” harkens to Bootsy Collins’ holiday release a decade back (“Christmas Is 4 Ever”)–but with the Chipmunks sitting in on vocals.

A buoyant horn and guitar opening to “We Wish You a Merry Christmas” sets the table for a distorted vocal a la David Byrne or Reeves Gabrels. That dueling dichotomy anchors the entire song, and gives it an inherent tension that is never fully resolved (and does not need to be). The old spiritual “Go Tell It on the Mountain” continues the Eno-Gabrels vein of distorted vocals laid over a straight-ahead acoustic guitar, both atop a swirling foundation of keyboards and electronics.

“The First Noel” begins as a pretty straight downtempo reading before a heavily distorted guitar lead–almost into Sonny Sharrock or James “Blood” Ulmer territory–bridge to the ending chorus. “Joy to the World” is the most unjoyful dirge one could imagine–a sort of industrial slag pit of noise and downtempo vocals that stand in stark contrast to the lyrics’ celebration of the arrival of the Creator in the form of a newborn.

“Silent Night” is visited twice; the first has an opening that calls to mind Marley’s ghost visiting Scrooge before seguing into a dark, brooding interpretation. The second version–the closing track–opens with the sound of a cold, winter wind (think of Yukon Cornelius’ scenes in the “Rudolph” TV special) that lingers for a full minute before the most traditional arrangement on the album.

Before that closing track, the distorted steel drums on an instrumental version of “Cup of Kindness” create a surreal Caribbean atmosphere–maybe a voudou Christmas song?

Despite Radulovich’s claim that this collection is for heathens, plenty of believing Christians who can get overwhelmed with the Christmas season will find much to enjoy here as well. It is a distinct approach that is an alternative–perhaps a tonic to some–to the treacle that all too often passes for holiday cheer.