February 2023
Vol. 22, No. 5
The Renaissance of Folk Arts Rare Records by Paul HormickOctober 2015
Jeff Beck: A Tribute by Ted BurkeOctober 2015
Marcus Petronius Bashore: The Best Seat in the House by T.E. MattoxOctober 2015
Pacific Wave: A Surfin’ Safari October 2015
The Winter Dance Party 1959: The Night the Music Lived by Terry RolandOctober 2015
Back with a Bang! Java Joe's Reunion at San Diego Folk Heritage by J.T. MoringOctober 2015
Book Review: The Philosophy of Modern Song by Bob Dylan by Ted BurkeOctober 2015
Rick Nash: Bass Man in Demand by Wayne RikerOctober 2015
Mod Revivalists the Trebels to Reunite for 40th Anniversary Show by Jim TrageserOctober 2015
If Music Be the Food of Love, Play On: Dually Noted Pairs Fine Food and Fine Music by Paul HomiczOctober 2015
Advertisements 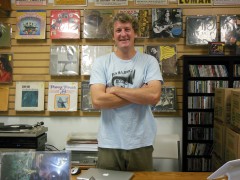 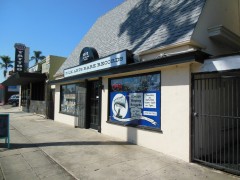 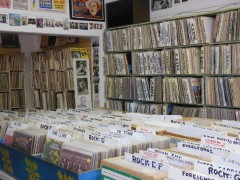 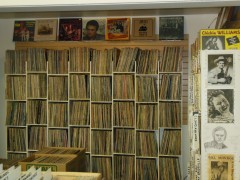 Brendan Boyle is clearly having a good time. The 33-year-old record enthusiast who recently acquired Folk Arts Rare Records stands amid the shelves and bins of his shop at its new location along El Cajon Boulevard. He smiles as he explains the motivation behind his recent acquisition, “You open a record store when you’re just so deep into records.”

How deep is deep? Boyle says that once he found his passion for recorded music, specifically the music recorded and committed to vinyl disks, he would sometimes spend four or five hours going through the record bins at Folk Arts shopping for LPs.

If you ask me, that’s being pretty deep into records.

Lou Curtiss, who had owned Folk Arts Rare Records for decades had decided, last, year to retire from the record store business. This presented a perfect opportunity for Boyle. “I got into the record business with the idea of someday opening my own record store. Then this opportunity came along to carry on with Lou’s record store here. It’s the best record store that I’ve ever known of. You could always find obscure musicians at Folk Arts Rare Records. It’s where I discovered the roots of American music,” Boyle says. “And it was in my hometown!”

If you haven’t yet made it to the new Folk Arts Rare Records, there is much to remind you of the great legacy that this record store has built up in close to 50 years. The walls, as has been the case of Folk Arts Rare Records for decades, are almost completely covered with photos and other memorabilia from when Curtiss owned and ran the shop. There are photos of Rose Maddox, one being from her appearance at the Adams Avenue Folks Festival from around 20 years ago. At one corner are the well-crafted classic images of Herman Leonard. These are large black and white photos of Ella Fitzgerald, Charlie Haden, Joe Henderson, and Dizzy Gillespie. In a corner is a photograph of Martin, Bogan, and Armstrong, taken when the legendary black string band performed at a folk festival here in 1976. There is an autographed photo of Dr. Demento and a color photograph of Devo, flowerpot hats and all. Boyle deliberately retained the old photographs and memorabilia. “I wanted to create the same sort of space that Lou had,” he says.

Records and music had not been a big part of Boyle’s life when he was growing up in Scripps Ranch. He first got a taste of what vinyl could mean to someone when he was away at school, studying history at UC Davis. He became a weekend disk jockey with a Sunday afternoon show on KDVS, a high-power community station located on the Davis campus. With a free-form format and one of the largest catalogues of recorded music under one roof, the station allowed Boyle to follow his whims and instincts when it came to putting something on the platter for broadcast. It was just a matter of time before the vinyl started to seduce him.

Boyle served as a radio host for seven years. He has also been a concert promoter and worked at a record store before launching his own record business, buying and selling records on Ebay. Before he came back to San Diego to take over Folk Arts, he had been living in the Midwest, where his wife’s career as an English teacher had taken them.

“A good record store should help you open your mind to every type of music. It could be Judy Garland or John Cage. It could be any type of music,” Boyle says. For his personal tastes, when he leafs through records for hours and hours in a process of discovery that he calls “letting the titles find you,” he is trying to find records with one specific thing. “For me, to consider a record to be a good record, it has to have a lot of soul. Now, any kind of music can have a lot of soul. It could be a country record or, like I said before, John Cage. But that is what I’m looking for: soul.”

A great number of younger folks have never seen a record turntable, and though there are older folks who tossed their turntables out or shipped them up to the attic to collect dust once they bought their CD players, there are still a lot of people who buy and collect records. There is no fixed sociological science behind this, but Boyle sorts today’s record collectors into three general categories. He says, “There are people who are really into the sound quality of vinyl. And then there are folks who are just what might be called “record people.” It’s part of their lifestyle and, for some, it’s almost like an addiction. And some people come to a record store to discover music in a different way.”

Boyle says that people who are in San Diego on vacation and other out-of-towners who have heard about his store stop in to shop There are also local enthusiasts who stop by weekly to pick up a record or two.

Tall and good-natured, with curly blond hair, Boyle has the happy ease of someone who is doing exactly what he wants to do for a living. He wears a red tee shirt, which naturally has the logo of a record store on it, as he explains some of the geography of Folk Arts Rare Records. Just past the entrance are the new arrivals, four or five bins of LPs that have just come into the store. “For the customers who come in every week, they know they don’t have to go through the whole store to find what they want. They can just check out what we’ve just gotten in right here,” says Boyle.
Over in a corner is a small white folding chair. It sits next to a humble turntable. If someone wants to check out a record, he or she can sit down, put on a pair of headphones, and listen to what the recording might hold before buying it.

One wall contains blues and old-time jazz from the ’20s and ’30s. I see titles for B.B. King and Jimmy Reed. Although Boyle’s stock in trade are LPs, he has a small area of compact disks. Next to the disks are the rare records, the ones that the collectors go crazy for. For some reason or other I see a lot of Bo Diddley recordings in this section. Boyle has an international section. If you’re looking for pressings of vinyl with Tex-Mex, folk music of India, calypso, or South American music, this is where you’ll find it.

They aren’t a large part of his inventory, but Boyle loves old 78s. A stack of the brittle disks sits on his desk. He plays a 78 of Jimmy Rogers, one with him singing a version of “Saint James Infirmary.” I think of Rice Krispies when I hear the crackle and pop (as well as the hiss and scratches), as the needle drops down on the swiftly revolving recording. Next I’m stunned by the power and clarity of Reed’s voice and guitar coming out of the speakers. It really is wonderful.

I take a brief tour around the rest of the shop on my own. The hand-drawn tabs that extend out of the bins let me know that I’ve walked into the jazz section. Phil Woods, the alto player, has almost an entire bin of his recordings. The album covers seem impossibly pristine, some of which are 40 years old or older. I treat myself to a relic of the days of vinyl, particularly the LPs of jazz musicians, by reading the liner notes on a Charles Mingus album.

Lou Curtiss opened Folk Arts Rare Records in 1967. At a time when the top hits of the country were by the Monkees, the Turtles, and the Box Tops, a music enthusiast could find old-time country hits of Lefty Frizzell and Pee Wee King at his record store. In the mid seventies Curtiss moved his shop to Hillcrest. For as long as I can remember, however, Folk Arts Rare Records, which Curtiss owned and ran with his wife Virginia, occupied a storefront on Adams Avenue.

Curtiss, who has a column, “Recordially, Lou Curtiss,” in this publication, is something of a walking encyclopÃ¦dia when it comes to old-time music and Americana. A day at Folk Arts could be interrupted by a phone call from the Smithsonian Institution, inquiring of him some obscure biographical statistics about Blind Lemon Jefferson or the exact recording date for some Fats Waller records. Curtiss has served as a researcher and archivist for the national group of museums and research center for years.

For decades Curtiss sponsored the San Diego Folk Festival, which evolved into the Adams Avenue Roots Festival and is now known as Adams Avenue Unplugged. He has an almost photographic memory of past performers, easily recalling names and performance dates as though they happened yesterday. Sunday evenings Curtiss hosts “Jazz Roots” on KSDS Jazz88.3FM. From eight till ten he plays old jazz and blues, as well as calypso, ragtime, and other progenitors of today’s jazz. He and his wife have often been seen at local open mics, Virginia with her guitar and Lou strumming his autoharp.

Among the stories that Curtiss might tell of his folk festivals and record store, many of them would include Gregory Page, A.J. Croce, and Tom Waits, among the number of performers who were mentored by Curtiss or at least were among the posse to spend hours hanging out at his store.

Tyson Motsenbocker: From Barista to Balladeer

In the Garage with the Shenanigans