January 2023
Vol. 22, No. 4
In the Garage with the Shenanigans by Joe TrashOctober 2015
Back with a Bang! Java Joe's Reunion at San Diego Folk Heritage by J.T. MoringOctober 2015
Book Review: The Philosophy of Modern Song by Bob Dylan by Ted BurkeOctober 2015
Rick Nash: Bass Man in Demand by Wayne RikerOctober 2015
Mod Revivalists the Trebels to Reunite for 40th Anniversary Show by Jim TrageserOctober 2015
If Music Be the Food of Love, Play On: Dually Noted Pairs Fine Food and Fine Music by Paul HomiczOctober 2015
Harold in the Land of Jazz by Bart MendozaOctober 2015
Sephardic Dance and Music by Yale StromOctober 2015
Loretta Lynn: A Special Tribute to the Queen of Honky Tonk by Terry Paul RolandOctober 2015
Ben Grace Gilmore: It's All About Building Community by Sandé LollisOctober 2015
Advertisements 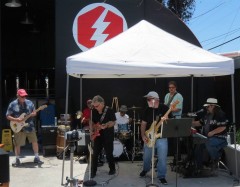 Not once has anyone in the otherwise quiet SDSU-area neighborhood griped that the rock ‘n’ roll pouring out of John Gunderson’s garage on Tuesday nights is too loud. But just like clockwork, over the past few years, the members of the band formerly known as Modern Rhythm (and that would eventually become the Shenanigans) have been meeting weekly and cranking up amplifiers in Gunderson’s garage studio for some bro-and-music time.

“I think we probably emerged in 2012,” says Gunderson. “Jim McInnes (yes, that Jim McInnes) came on board immediately with Jack Pinney, and then we got Tom Meksto over here, and it was a good time. Other guys would sit in, too. Joe Longa, he would come over.”

The late keyboard player was drawn in by the friendship and by the obvious musicianship and by the band members’ deep knowledge of material. Collectively, the Shenanigans know countless old off-the-wall rockers, and they work hard to make them cook in their own way. Consider a typical Shenanigans’ set list that includes such venerable material as “Uranium Rock” and “Vasco” and “One Bad Stud” and “Kissin’ and a-Huggin’.”

“It’s not about playing any one song in a particular way,” John Gunderson explains during a break in rehearsal. “We do our own version of any song.”

“All we care about is how it feels.” Jack Pinney is the Shenanigans’ drummer. “If we want to leave part of the original version out, it’s gone.”

Gunderson, to an imaginary audience: “And now, we’re gonna play something that makes us feel good. Trust us.”

In the beginning, without any thought to playing out, the various members just showed up and plugged in and worked songs down to a place where they were tight. They got better and better every week. Finally, the band broke out last year and gigged at a dance at the Moose Lodge in Spring Valley. After that, it was onward to the House of Blues main stage, then gigs as regulars at the new Bolt Brewery in La Mesa.

Tom Meksto: “I remember the day when John said we sounded pretty good, and that maybe we should play out somewhere.”

The Shenanigans are in truth a local super group. Consider their individual pedigrees: bassist/frontman Gunderson was a founding member of Claude Coma and the IVs and a founding member of Modern Rhythm. His own roots go back to night clubs now long gone, including the Hi Ho Club, the Cinnamon Cinder, La Mesa’s the Land of Oden (“I was 14 when Pete Seeger made me want to play music”) and Bay Park’s Spirit Club, among others.

“Iggy Pop liked Claude Coma,” he remembers. “And Iggy was in town once and he had this idea. He said we’re gonna find a club, and we’re gonna play a set. But nobody can play his own instrument. That was the catch. Richard Banke (alias Skid Roper) was doing a surf-rock thing at the Mandolin Wind, and he let us come up and play some tunes as the Wurst. That’s what Iggy called us — the Wurst. Yes,” he says. “We were terrible.”

Drummer Jack Pinney was a founding member of the original Iron Butterfly, then went on to Glory and then on to Jerry Raney and the Shames and the Jacks and countless other first-call local and touring bands. “A rhythm section for hire. That was my thought in the beginning. Just John and me. This was in 2012 after Modern Rhythm, after we were dismissed from that band. I thought, wouldn’t it be great to have a rhythm section that knows a ton of songs?”

Jim McInnes was the heart and soul (and voice) of a daily radio show (plus the popular “Homegrown Hour”) on KGB FM where he was a celebrity deejay (JM in the PM) for close to three decades. He has likewise played bass and guitar in various memorable rock bands over the years, including Land Piranha. Now, McInnes plays lead guitar in the Shenanigans. “As I was recovering from brain tumor surgery in 2012,” he says, “John Gunderson called me a few times trying to get me to come over to his studio and jam with him and drummer Jack Pinney. I eventually relented and began playing guitar for the first time in five years. The Shenanigans grew out of this core trio.” The three had previously played together from 1999 to 2006 in Modern Rhythm.

Tom Meksto is not only the tallest member of the Shenanigans, but as rhythm guitarist, he is the glue that binds. The CBS radio veteran knew JM in the PM from broadcasting. Meksto picked up the guitar in 1976 (keys in 1968) and logged much time as a singer and a picker on folk, rock, and jazz projects that saw air time in his native Chicago. He has a private recording studio built in his Pacific Beach home.

Paul Kater, a physician, has been jamming with Gunderson and Pinney since 2001. “John was one of my patients,” he says. “And when I found out he was in a band I mentioned that I’d always wanted to learn drums.” That was all it took — Gunderson invited him to jam on rhythm instruments like cowbell and shaker. Eventually, he graduated to the full kit and now plays a couple of tunes in the lineup. The good doctor is also heard on backing vox, and trombone.

Lately, Tuesday nights have gotten louder, with the addition of Mark DeCerbo and Mark Bentley… and their respective amplifiers. “We were totally surprised that the two Marks came on board and wanted to play with us,” Jack Pinney says.

Lead guitarist/vocalist Mark DeCerbo performed with Rockola and first came to fame as a member of the indie rock band Four Eyes back in the 1980s. “When Jack, John, and Jim reached out to me to come join in the fun with no pressures or strings attached, I did, and it felt pretty darn good. After a year-long, self-imposed performing hiatus, I found it refreshing and fun to dip my toes into the Shenanigans’ cool pool of solid sound. The band’s a tight, and not so little, group that plays fun, simple, rockin’ tunes with the groove being the main thing.”
DeCerbo’s membership in the group also means there are now three guitars in the lineup. “The guitar situation with me, Jim, and Tom pretty much fell into place naturally. We all have different styles and different strengths and we try to complement each other. Meaning, we either stay the hell out of each other’s way, or we all play with guns blazing, whichever the song calls for. Fun stuff.”

The other “Mark” is Mark Bentley on keys and vocals, a Philadelphia transplant who works regularly with blues legend Johnny Vernazza. “I played in a band with Jack for a little while back in the nineties. He’s got such a great style and is just a blast to hang with. We both live in La Mesa, and we would bump into each other now and again but hadn’t played together in quite a while. So when he invited me up to a Shenanigans rehearsal, I was like hell yeah, this should be fun. And I’ve been hooked ever since. I think my keyboards bring a different voice to the band to balance and complement the three-guitar sound. With this many instruments, I try to tread lightly, to only enhance, and not clutter the sound.” Bentley, like Mark DeCerbo, also sings. “Vocally I have a different lead style from John and Marc, yet we blend really well when we are doing harmonies. And with Paul Kater, we can pull off some four-part harmony stuff that’s pretty slick.”

Finally, pop music columnist Dave Good, a tenor sax player on the side, was the latest to learn the secret Shenanigans handshake. “I’ve known Jim McInnes going all the way back to when we worked together at KGB, back during the ’80s. I’m amazed to be in this band. There’s camaraderie, and it’s a blast to play the songs. And in spite of all the joking around, the Shenanigans are a really good band, but the guys would never ever admit to that.”

“It’s electric,” Pinney says of the sessions in Gunderson’s garage. “We love it. It sounds great, and that’s what keeps us coming back.”

Look for the Shenanigans September 26, 1pm at the Adams Avenue Street Fair in support of Steve Poltz.