October 2022
Vol. 21, No. 13
The Queen of Boogie Woogie Is on the Air by Wayne RikerMarch, 2013
Hemisphere: Positively Energized and Ready to Rock by Laura PrebleMarch, 2013
Albert Cummings Is Good with his Hands by T.E. MattoxMarch, 2013
Book Review: Mandolin Man, the Life of Roland White by John HighkinMarch, 2013
Farm Truck: Coming to a Venue Near You by Wayne RikerMarch, 2013
Songbirds Take Flight by Charlene PulsonettiMarch, 2013
Performers and Artists Contribute to the Audubon Society’s Birdsong Project by Paul HomiczMarch, 2013
Finding the Balance Between Science and Music: An Interview with Dr. Hima Joshi by Catherine BarnesMarch, 2013
Jazz 88's Joe Kocherhans Bids Farewell to a Long and Illustrious Career by Wayne RikerMarch, 2013
Tiki Oasis Celebrates 20 Years of Exotica Mayhem and Fun  by Andy RasmussenMarch, 2013
Advertisements 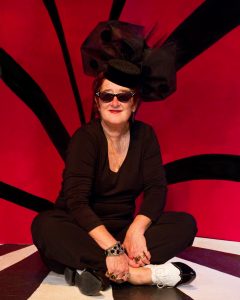 “Hi everybody, welcome to San Diego Sessions, I’m Sue Palmer.” And with those words on Sunday, January 27, 2013, local piano legend Sue Palmer began her reign as host of the “San Diego Sessions” hour on KSDS (Jazz 88.3 on the FM dial), which airs at 5 p.m. every Sunday evening. Palmer takes over the controls following a 15-month stint hosted by Union-Tribune pop music critic, George Varga. “As a San Diego native, I have heard wonderful music here all my life,” Palmer stated. “This is a giant opportunity for me to both learn more and also share some of my knowledge about San Diegans, past and present.” KSDS station manager, Mark DeBoskey, proclaimed his joy in having Palmer on the KSDS team. “To me, it’s one of my very favorite shows that Jazz 88.3 airs,” DeBoskey said. “San Diego is home to so many wonderful jazz and blues musicians, so having one of the very best present their work on a weekly basis adds to the opportunity in exposing San Diego’s musical creativity, both locally and globally via our large Internet listening audience.” Palmer joins a station that is a rare breed these days, broadcasting 24/7, presenting an eclectic range of authentic mainstreamÂ  jazz, including a wide variety of traditional and progressive styles, from big band, swing and blues, to bebop, cool, fusion, and more, along with the 2011 honor of “JazzWeek Large Market Station” of the year.

Program director and long-running host of the “Jazz Ride Home” late afternoon show, Claudia Russell, had a big part in nabbing Palmer for the Sunday evening show. “She’s a consummate musician. She’s led bands, held side gigs, has hit stages solo, while all the while managing the ins and outs of the music business as both a performer andÂ  recording artist… and she is local,” Russell emphasized. “She’s been steeped in the jazz and blues scene her entire life. Her interest in the music and the artists really does run deep; as she’s able to appreciate the history of this town’s culture in addition to hearing what is new and upcoming in radio. We like people who have big ears,” she continued, “the ability to hear good sounds in music, both old and new. In addition, she has a great personality. It was a real bummer to see George Varga go, not an easy chair to fill, but fortunately the timing worked out perfectly for Sue,” Russell concluded.

Other hosts echoed Russell’s comments. Janine Harty, host of a few shows, including blues, jazz, and gospel spots, in addition to being a visible presence about town for many live performances, beamed about Palmer’s hiring. “Sue Palmer has been a San Diego jazz and blues legend for longer than she would probably like to admit. It’s a real plus that this local treasure brings her excellent musical taste and knowledge to the airwaves with the San Diego Sessions show.” Fellow Point Loma native and long-time host of the morning jazz show, Gary Beck, added his enthusiasm to the mix. “She adds a spunky local twist, and she’s a fellow Pointer, being that we both went to Point Loma High School.”

Additionally, some of the station’s most ardent listeners chimed in as well. Local jazz aficionado and avid KSDS listener, Barbara Wise, who attends nearly every jazz happening in San Diego, gave a big thumbs up upon the news of Palmer’s arrival at KSDS. “I’ve been a big fan of KSDS and all of its programs for years and have it on all the time at home, including listening to ‘San Diego Sessions’ since the Cynthia Hammond days when it was called ‘Local Jazz Corner,’” she said. “I thought Sue’s first show was the perfect mix of local music and local musicians, and I look forward to hearing her future programs.”

Palmer’s native San Diego heritage bodes well for the show as she has lived through much of its musical past. In addition, she has been researching some of the city’s early jazz history, gleaning through recordings that will emphasize some of the pioneering jazz legends in America’s Finest City. She was fortunate to have grown up in a household filled with mellifluous musical sounds. “I grew up in a musical family on my mom’s side,” she reminisced. “One of my aunts lived with us, along with my parents and brother. She would play piano every night and taught me how to play the ukulele. My other aunt, who played alto sax, would drive down from Los Angeles every couple of months for lengthy jam sessions. My grandfather played fiddle,” she continued, “so there was lots of music around me all the time, it was fun.”

Palmer’s initial interest in playing blues piano, particularly boogie woogie style, happened when she was quite young. “I was around ten years old when I passed by a Baptist church in Ocean Beach and heard the first strains of boogie woogie piano,” she smiled. “That’s when I said to myself that that’s what I want to do.” Her first piano tutelage was five years of piano lessons from a neighborhood piano teacher. “His name was Mr. Hazwell,” she recalls. “A neighbor friend of mine and I would ride over to his house for our weekly lessons.” Palmer also made the rounds with various jazz piano teachers, including the legendary Bud Conway, whose looming billboard for piano lessons in his front yard on University Avenue was a San Diego landmark for decades.

Her best results came from long-time SDSU music professor Bob Holtz. “It finally clicked when I studied for awhile with Bob Holtz. He taught me a lot of the Bill Evans chord voicings along with other cool improv and chordal ideas; that experience completely changed my overall playing.”

Many of Palmer’s early gigs routinely had her playing music from the 1920s and 1930s, including Dixieland and Swing styles, in a few groups that included Misbehavin’, Hot Flashes, and Tobacco Road. In the 1990s she joined singer Candye Kane’s band, which gave her someÂ  global recognition for a solid decade, as Kane’s group played gigs worldwide, mainly in Europe. Additionally, Palmer was musical director for Kane’s play, Toughest Girl Alive, in 2010. Since her formation of the Motel Swing Orchestra, over a dozen years ago, she has picked up the moniker, “queen of boogie woogie,” through her high-energy barrelhouse styling on the ivories. Her Motel Swing Orchestra has been a featured act at the San Diego Blues Festival, Sacramento Jazz Jubilee, Mammoth Jazz Jubilee, San Diego Thanksgiving Jazz Festival, and the Ocean Beach Jazz Festival, as well as regular appearances at many of the club hot spots locally. Guitarist Steve Wilcox has worked with Palmer since the early ’90s, as well as currently with the Motel Swing Orchestra, a musician who certainly can attest to Palmer’s musicianship and personality. “Sue and I played and toured with Candye Kane through most of the ’90s. Working with a pianist of her caliber was a dream come true for me. I was raised on my parents boogie woogie recordings, a style that really knocks me out, and Sue does it better than anyone I know,” he exclaimed. “We reunited a few years later when Sue formed her Motel Swing Orchestra band, and we’ve been working together ever since. I usually set up to the left of Sue, so I have the best seat in the house. Night after night I get to hover over her and watch those fingers fly. I feel extremely blessed to have had the opportunity to work with Sue all these years; she has musically enriched my life.”

One of Palmer’s career highlights was a 2002 Boogie Woogie Extravaganza gig, honoring the original “Queen of the Boogie,” singer, songwriter, and pianist, Hadda Brooks, who joined Palmer and two other boogie woogie piano luminaries, Wendy Dewitt and Philippe Lejeune at Dizzy’s nightclub in San Diego. In addition to all her many band and gig adventures, Palmer was honored by San Diego for her cultural contributions with the Jim Croce Award for Excellence and Dedication to Music, presented by Croce’s widow, Ingrid, whereby having a day named after her (March 25, 2008). In 2010, her solo piano album, After Hours, won “Best Blues Album” at the San Diego Music Awards.

And now another chapter begins with her new role at KSDS, adding to a long and distinguished career around music in varied capacities. As with many musicians, who will moonlight until they can successfully tackle the music scene full time, her moment in time came a quarter of a century ago as she reflected fondly: “I quit my day job in 1987 and have never looked back!”

I’ve Been Everywhere, Man: Notes from the tour journal of Gregory Page

Latin-themed Concerts This Month from the New Expression Mandolin Orchestra