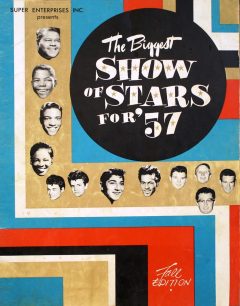 There have been many great multi artist events in San Diego’s music history, but it’s pretty certain that nothing quite tops the evening of October 12, 1957, when the Biggest Show of Stars tour stopped in at 3,000 capacity venue, the Mission Beach Ballroom, located right on the boardwalk in Mission Beach, for a sold-out show. Promoted by Irvin Feld, who followed up his career as a music promoter and this tour by becoming the head of Ringling Brothers and Barnum & Bailey Circus, later founding their famous Clown College– this is a time machine-worthy concert full of names that still resonate 60 years on. The amazing bill included short sets from Buddy Holly & the Crickets, Chuck Berry, the Everly Brothers, Fats Domino, Frankie Lymon & the Teenagers, Laverne Baker, the Drifters, Clyde McPhatter, and Paul Anka (a Feld discovery) as well as Jimmy Bowen, Sam “The Man” Taylor and the Spaniels plus Johnnie & Joe, all backed by the Paul Williams Orchestra. While some of the performers had been making music for years, others were just starting out: Lymon was a mere 15 at the time; Anka, already a budding hit tunesmith who would go on to co-pen “My Way,” was 16. It was a grueling tour for the artists, starting on September 6 in Pittsburgh, Pennsylvania and running through November 24 in Richmond, Virginia, performing a total of 80 shows across the U.S. and Canada. The Everly Brothers returned to San Diego in 1961 when they were drafted, ultimately spending six months at Camp Pendleton.

WHAT’S YOUR FAVORITE TV THEME SONG AND WHY?

Jonathan Lea / The Jigsaw Seen: It’s probably way too obvious but my favorite is the first one I can remember hearing, which is Batman. The combination of a great, simple riff and those vocal stabs (perfectly enhanced visually with the animation) makes this one perfect to me. Other faves are The Munsters, Mission: Impossible, Hawaii 5-0, and The Green Hornet, but for me, Batman triumphs over all of them.

Joe Macaskill / Pony Death Ride : All In The Family. We were both young kids, but what a catchy tune actually sung by the characters themselves. We even modeled our song “Old Souls” after this theme song. A married couple playing a song together, slightly out of key with sassy lyrics. Sound familiar? Still don’t know what the hell they’re saying!

Fernando Perdomo: The Price is Right. I have always wanted to have a Price Is Right tribute band called Splendido. I honestly can say that the Price Is Right started my obsession with analog synthesizers, major seventh chords, and ’70s drum sounds.

Brian Reilly / Schizophonics: I’m gonna catch shit for this, but it’s a two-way tie between Rockford Files and Night Rider.

Sarah Rogo: I don’t really watch TV actually. But you can go with Spongebob Squarepants.

Doriot Lair / The Dinettes: The Twilight Zone, which I used at the beginning of our song, “Television in ’79.” I think a lot of people our age kept that song in their heads as a reminder of how surreal actual life might be, was, and is. All you need to do is hum a measure and instantly millions of people understand it as a reference…a sign…like a bit of sonic semiotics. What’s also surreal is that the composer, a French guy from Romania, worked for the most part on ballet scores. He didn’t even know his motif for the Twilight Zone was a “thing” since it was rendered while he was under contract to CBS. Same as it ever was and just as surreal.

Thee Strawberry Mynde (EP/Moonhead Recordings)
A four-track garage rock EP of original songs from this British trio in advance of a pending debut album. The disc starts strong with the obvious “single” here, “Hidden,” which is a stomping rocker in the tradition of songs such as “99th Floor” or given the organ riffing on this track, groups like the Fuzztones or Prisoners. Indeed the “Medway Sound” is an apt description of the tunes here–not a lot of polish/production, but plenty of energy/heart. While keyboard is missed on the remaining three songs, they hold up well, especially “Know No More,” which sounds like the perfect B-side to “Hidden.” For fans of modern mod or garage rock bands. www.facebook.com/strawberrymynde 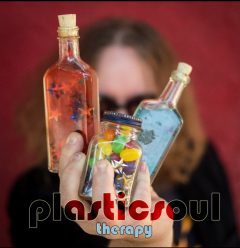 Plasticsoul: Therapy (Big Stir)
Ten tracks of Cheap Trick/Jellyfish/Queen-inspired powerpop, closing with an additional cover of the Creation’s classic song “Biff Bang Pow.” Of course, there are plenty of groups that claim those artists and similar as influences, but in Steven Wilson, Plasticsoul has the songwriting chops to back it up. The album is a grower, repeated listens bringing out nuances. The album starts off on a quiet note with “My Heavy Soul” before kicking off into the title track, a terrific heavy pop rocker that ramps up into guitar hero territory for its last 50 seconds. The tune is easily the album’s “single.” Also good is “They All Died Pretty,” a reverb and fuzz/sixties garage rocker with an earworm title hook. The album’s songs sound like they were recorded at different sessions, which works here, as stylistically the album is all over the place, but it’s all held together by Wilson’s superb voice, particularly on the softer material. Variety? “Babylon” is a dreamy, trance-like song, full of Indian-sounding instrumentation, but the preceding song, “Monkey on a Stick,” is full of teenage rock ‘n’ roll angst right out of an album like Cheap Trick’s In Color. Another favorite song here is “Keeping a Light On,” a riff rocker in the tradition of Dwight Twilley’s “I’m on Fire,” with a terrific harmony-backed bridge, but pretty much anywhere you put the needle down on this disc, you turn up a gem. This is a solid listen start to finish with plenty of variety to keep things interesting. www.facebook.com/plasticsoulmusic 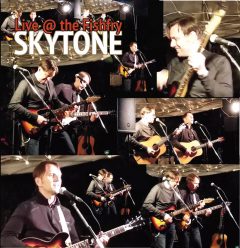 Skytone: Live @ the Fishfry (The Beautiful Music)
Eleven live tracks from the indie jangle pop duo Skytone (aka Rodney and Darius Doddridge), a cross on this disc between Jonathan Richman, Simon & Garfunkel, and, vocally at least, Lennon—McCartney circa 1964. Not as polished as Skytone’s studio albums, this is still really good, clever lyrics topping catchy songs that sound like lost classics; these guys really know their way around a melody. Considering the live nature of this recording, it sounds great, crowd noise and banter adding to the atmosphere. The majority of the album might be classified as sixties influenced, guitar-based songs with plenty of jangle. That said, the pair deviates from that here for the last few numbers. “Bright and Better Days” uses a funky keyboard as its lead; it’s an okay tune. What follows, however, is one of the album’s highlights: “It Doesn’t Really Matter Anymore,” which here sounds like a song that might have been heard on ’70s AM radio, complete with a disco guitar lick and a chorus that’s pure singalong hook. Definitely pick this up while you can, but you’ll want to hear Skytone’s studio works as well. www.thebeautifulmusic.com/skytone