January 2023
Vol. 22, No. 4
The Blue Guitar: A Local Mainstay Reborn Yet Again by Raul SandelinJanuary 2018
Back with a Bang! Java Joe's Reunion at San Diego Folk Heritage by J.T. MoringJanuary 2018
Book Review: The Philosophy of Modern Song by Bob Dylan by Ted BurkeJanuary 2018
Rick Nash: Bass Man in Demand by Wayne RikerJanuary 2018
Mod Revivalists the Trebels to Reunite for 40th Anniversary Show by Jim TrageserJanuary 2018
If Music Be the Food of Love, Play On: Dually Noted Pairs Fine Food and Fine Music by Paul HomiczJanuary 2018
Harold in the Land of Jazz by Bart MendozaJanuary 2018
Sephardic Dance and Music by Yale StromJanuary 2018
Loretta Lynn: A Special Tribute to the Queen of Honky Tonk by Terry Paul RolandJanuary 2018
Ben Grace Gilmore: It's All About Building Community by Sandé LollisJanuary 2018
Advertisements 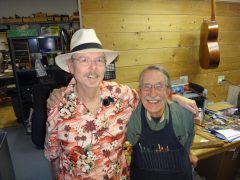 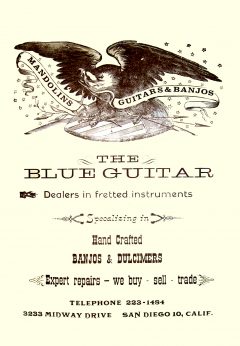 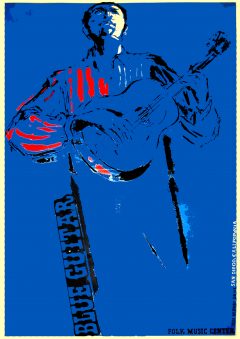 The Blue Guitar, which first opened in 1961 by Ed Douglas and Yuris Zeltins, will be closing its doors on February 14. In its long and illustrious history, the store gave birth to one of San Diego’s first bluegrass bands, the Scottsville Squirrel Barkers, which included Ed Douglas, Chris Hillman, Bernie Leadon, Larry Murray, and Kenny Wertz. The focus on the Blue Guitar has always been about repair, with customers that have included George Harrison, David Lindley, and Jackson Browne among others. It’s the end of an era and we’ll be sad to see them go. There a giant sale going on until they close. To give our readers a little background on the store, here is a reprint of a Troubadour article from August 2007.

The most common scenario in the music industry is the shooting star, out of the gate bolstered by energy and maybe some talent and hype. Whether they deserve it or not, most acts put out a frantically busy few years followed by atrophy. The Beatles and Nirvanas of the world fit this bill, although most fizzle less splendidly than these more famous examples. Then, there are the acts that last and last, and perhaps last a little too long, parading their irrelevance around before finally being sent out to pasture. We can all look at the stable of today’s stars and pick out the ones who have outlived their 15 minutes, 15 months, or 15 years of fame.

Then, there are those performers and bands who find ways to last and last yet do so with an ever new-found vigor, somehow reinventing themselves while erasing any vestiges of plastic surgery. But, these instances are rare although I’m sure we all have our favorites. For obscurity’s sake, I’ll throw out the Count Basie Orchestra, which still swings hard and tours like a mofo, 20 some odd years after the Count last left the proverbial building.

Like fractals in nature, the above models apply to virtually all facets of the music business, including the humble, local guitar shop. Of these, you have the ones that bounce onto the scene, buoyed by wet tee shirt contests and rock star clinicians only to find themselves in Chapter 11 within the year. You have those that last and last, hoping that their stockpile of Hondo Les Pauls with bolt-on necks will soon catch on as the next retro fad.

And, then, you have San Diego’s Blue Guitar, which has kept itself at the forefront of the local (and international) guitar community while growing and finding new strength through a series of personnel and ownership changes over the last 46 years.

For those of you not entirely acquainted with Blue Guitar’s history, the shop first opened in 1961. With local luthier extraordinaire Yuris Zeltins always a main ingredient, the store’s associates once included Ed Douglas, founding member of the Scottsville Squirrel Barkers, which gave a pre-Byrds Chris Hillman his start, and, later Steve Neal, who continued as an owner until retreating to Idaho in 2003. Occupying over a dozen locations in the last 46 years, Blue Guitar has traversed the Midway-P.B.-Old Town triangle. And, most probably remember it in its India Street location. In 2005, it moved into its newest digs out on Mission Gorge Road.

Yet, despite its ever-shuffling changes in venue and ownership, the Blue Guitar has maintained its reputation as one of those primeval rocks in San Diego guitar culture, thanks in no small part to Yuris Zeltins’ track record as a crack guitar builder.

In 2003, Blue Guitar entered into its latest incarnation. Steve Neal was ready to open up his new workshop in the decidedly quieter environs of Idaho. (He still builds his Saqui Guitars with a two-year waiting list and runs the Salmon River Guitars workshop.) So, in stepped DeForest Thornburgh, a long-time Blue Guitar customer and devotee, to buy out Neal and interject new dynamics into the store’s long history.

A Southern California native, Thornburgh found himself in the middle of surf guitar country as a kid and spent his adolescence listening to the masters like Dick Dale. During the British Invasion, he leaned toward the bands displaying “guitar gymnastics” like the Yardbirds. Later, he would meet members of the Buffalo Springfield who were practicing and hanging out in a neighbor’s garage in Palos Verdes. At the same time, many of his nights were spent on the Sunset Strip where he regularly caught bands like Cream playing the Whisky and other local haunts.

Thornburgh soon drifted to San Diego, walking into Blue Guitar for the first time in 1971. He would become a regular customer and friend of Yuris and Steve. While building a career in computers, DeForest jammed around town and in the Palm Springs’ blues scene, developing a solo acoustic, finger-picking style akin to John Fahey. Being a lefty, he was happy to find people knowledgeable about gear, especially those who were able to find left-handed gear. Over the years he also found it worthwhile to learn about the industry. Starting in the early ’90s, Thornburgh began attending NAMM shows regularly and making the connections that would soon serve him well.

Finally, in 2003, he bought out Neal. Already part of the Blue Guitar family, it was an easy transition. Yet, Thornburgh also wanted to bring the store up to date, employing many of the industry tricks he had learned along the way. One thing he spotted right off was that Blue Guitar had gone through periods when it just did repair followed by periods when it just did retail. Part of Thornburgh ’s plan was to balance the two so that the shop could still continue to showcase Zeltins’ world-class craftsmanship while providing the wide array of guitar gear that has made the bigger box stores more successful.

He also sought to ground his new acquisition with a smart business plan. To that end, Thornburgh sought guidance from the San Diego Small Business Administration. With the help of one of the SBA’s mentors–Jim Nelson–Thornburgh went the extra yard and actually bought the building where the store is now located. Besides helping to secure the financing, Nelson also helped him analyze Blue Guitar’s clientele and choose a location that would be freeway close to its demographic base. The result is the Mission Gorge location, right off I-8, which readily connects the store to the beaches, central city, and all other major freeways. So, in 2005, the shop made the Herculean move from India Street to Mission Gorge Road.

With his natural business acumen, insights from the SBA, and connections he had made both locally and through attending NAMM shows, Thornburgh set about attracting a big league lineup of brands and manufacturers for the retail side of the store. To this end, Blue Guitar has become the largest Taylor Guitars dealer in San Diego, winning Taylor’s New Dealer Award in 2006. Thornburgh also picked up bluegrass guitar maker Huss and Dalton’s Top 10 Dealer Award that same year. In addition, the store is the exclusive dealer for Santa Cruz guitars in the city. Thornburgh also set up contracts with Seagull, Art & Lutherie, Simon & Patrick, Avalon guitars out of Ireland, Larrivee, and National Resonator.

He also began stocking an impressive selection of ukuleles, which bodes well given that San Diego has one of the largest numbers of uke players in the country with the Moonlight Beach and Hui-o-hawaii cultural societies boasting a combined membership of over 1,000 people. As Thornburgh reminds us, “Real ukes are not toys.” The shop carries Ko’olau and Kanile’a ukuleles, two of the worlds top makers, which retail from $700 upwards to $4,000. He also stocks Pono, Ko’olau’s budget line, which run from $350-600.

Part of Blue Guitar’s longstanding reputation is based on Yuris Zeltins’ renown as a high-end classical guitar luthier. In fact, a number of articles have been written about Zeltins’ fabled talents. He even calls three generations of Romero, yes, those Romeros, not only customers but friends as well. Tim Miklaucic of Guitar Salon International, the premier classical guitar distributor in the world, called Zeltins the finest classical repair person he’s ever met. In fact, Zeltins is one of only a handful of luthiers contracted by Guitar Salon to do its most intricate repairs.

To build upon this reputation in the classical and Flamenco guitar world, Thornburgh has expanded the retail end. The store currently carries a number of Spanish, local, and other names including Ramirez, Cervantes, Antonio Loriente, Robert Hein, Kremoni, Antonio Aparacio, Cordoba, and Tomas Lazaro. As an affordable alternative, the shop also carries the Aria classical line.

Knowing that names like Taylor and Ramirez would attract a more affluent and professional demographic, Thornburgh also wanted to appeal to the younger rock ‘n’ roll crowd. He himself has always swung between refined acoustic playing and raucous blues. In this light, Blue Guitar carries a number of boutique amps and pedals, including Homebrew, Keeley, Pigtronix, D-Tar Preamps, and Victoria Amplifiers. In addition, the store is the only Orange Amp dealer in San Diego and carries a wide variety of better known brands such as Boss, Seymour Duncan, THD, Dunlop, and Fishman.

Blue Guitar also has one of the largest selections of strings in the county, ranging from “Romero” classical sets to Dell’arte Gypsy jazz to the usual array of D’Addario and other steel string makers. In fact, it was Thornburgh’s long-ago search for strings for various Greek instruments he’d bought while backpacking through Europe that brought him into Blue Guitar way back in 1971. So, it only seems fitting that strings would continue to be a mainstay of the business.

Blue Guitar has two large, sound-proof galleries of guitars. One houses the many acoustic guitars mentioned here. The other houses an impressive selection of electrics, including Godins, such as the John McLaughlin LGXT and Multiacs. A variety of Chris DiPinto guitars are also hanging on the wall. DiPintos are the latest contribution to the retro world with Mosrite and Teisco contours and modern amenities. In addition, Blue Guitar sells RKS Guitars made famous by rocker Dave Mason and Rick Turner’s Renaissance Guitars which have been gobbled up by Lindsey Buckingham, the Grateful Dead, and Crosby, Stills, and Nash.

It would seem that Zeltins’ command of the workshop and Thornburgh’s creative insight into the retail world would provide more than an adequate list of products and services to Blue Guitar’s customer base. Yet the store has long been known for housing an outstanding stable of teachers who provide guitar lessons in all styles and to all levels. So, when the move was made to Mission Gorge, some half-dozen teachers made the move as well including local blues ace Robin Henkel who has taught out of Blue Guitar for some 20 years.

Given all of this, the 46-year, San Diego institution known as Blue Guitar continues to pack a pretty impressive punch and will positively surprise both the long-time customer and the casual guitar player who happens to walk through the doors.