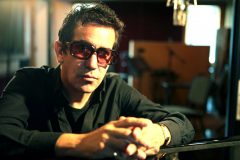 It was the nineties, back when the Gaslamp District was new, before it became the full-blown adult playground that it is now. Light, warm rain was falling, giving even the oldest of the Gaslamp’s Victorian structures a slick, clean look. The air was fresh and balmy, almost tropical. No one hurried to walk between the raindrops. My friend and I dropped into a bar. The place was pretty packed for a Sunday.

We grabbed our beers and headed for the balcony. The guitarist and bassist set about tuning their instruments, and the drummer sat behind his kit. Wearing a black shirt and a rakish, patterned fedora, A.J. Croce took his seat at a grand piano. From the very first tune, his hands blistered on the keyboard; his voice, often compared to fellow San Diegan Tom Waits, growled and wailed; and for the next 40 minutes the young singer barreled his band through hard-driving soul and blues.

Back then, experiencing a performance by Croce was a commonplace occurrence here in San Diego. The musician was a stalwart of the Gaslamp District, often performing at Croce’s, the restaurant and bar that Croce’s mother owned and ran for decades downtown. In the decades since, A.J. Croce has gone on to take his music to the rest of the country and, indeed, to the rest of the world. His CDs have received critical acclaim, with 17 of his singles charting in the Top 20. He has performed at a TED Talk and appeared on the Today Show, the Tonight Show, and the Late Show.

This month Croce brings his brand of contemporary soul and blues back to San Diego with two North County performances. Croce will be at the Belly Up in Solana Beach on Wednesday, January 3, and another concert at Saint Peter’s Episcopal Church in Del Mar on Thursday, January 4. Performing with Croce will be in-demand San Diego-based percussionist Tommy Aros, whose resume includes recording and performing with Freddy Hubbard; David Benoit; Dan Segal; and Trini Lopez. Recent tour dates for Croce include appearances in Manhattan, Kansas, and Chicago. The tour will include performances in Texas, South Carolina, Canada, and Michigan.

Croce has just released Just Like Medicine (reviewed in this issue), his tenth recording. Besides critical acclaim, the CD is being well received among listeners. “The record is doing really great. It’s in the top 20 in a number of charts,” he says. Croce attributes the success of the recording to the honesty of the recording and songs. “The first song ‘Gotta Get Outta My Head’ starts with really the way I was feeling when I wrote that song and where my head was at the time.”

Croce wrote seven of the ten tunes on this disk. He sings one of his father’s songs, “Name of the Game.” He has performed songs of his father previously, but this is his first stab at recording a Jim Croce song, one that the seventies troubadour did not record himself.

He collaborated with Dan Penn for one of the recording’s songs, “The Other Side of Love.” Penn’s previous writing credits include co-writing the Aretha Franklin anthem “Do Right Woman, Do Right, Man” and co-writing the Box Tops’ 1968 hit “Cry Like a Baby.” Croce worked with the late Leon Russell to write the second tune on the disk, “The Heart That Makes Me Whole.”

“Full Fidelity” “Long Playing,” familiar phrases from long ago when the term “LP” was still new, adorn Just Like Medicine in their retro typefaces. The graphics for the rest of the package ring out of the grand old times of the Atomic Age and Space Age, back when it was hip to be modern.

And, at the top of the front cover, it proclaims, MONOPHONIC, Yes, forget all the developments of stereophonic magic, let alone any hat tipping to anything like quad. A.J. Croce’s new CD is in mono. For Croce, deciding to record in mono was not necessarily an attempt to be retro. If anything, as far as he’s concerned, it was one of the more 21st century things about the CD. “Everybody listens to music now on their ipads or laptops. Making this recording in mono was just recognizing that this is the way people listen to their music now,” he says.

And though the packaging is retro, Croce is not trying to recreate what came out of Memphis and Detroit in the fifties and sixties. Rather, he might be compared to the late Sharon Jones, whose style of soul was updated for newer audiences. Croce thinks of classic soul and blues as being something of a springboard for his personal creativity. He says that his intention was to create a record that was soulful and incorporates the old sounds of soul and blues in a new style. He doesn’t want to be a type of musical museum. He wants to remain contemporary and reflect contemporary life.

Croce shares with his father a love of old blues and Tin Pan Alley. Though his father was a balladeer, who kept the pop charts populated with stories of ne’er-do-wells getting their comeuppance or failed love as told to a phone operator. (A long time ago there used to be folks called telephone operators who would help you make phone calls. This is before smart phones changed the course of civilization.)

The younger Croce remembers falling under the spell of Ray Charles as a small child, and when I spoke to him, he talked of his love of Bessie Smith and Fats Waller. While Jim Croce’s records were sculpted for the pop sensibilities of 40 years ago, A.J. dives deeper into blues and soul. “Honesty. There is just this pure basic honesty to what those musicians were doing back then,” he says of the old soul and blues artists.

Croce now lives in Nashville, having moved there with his wife two years ago. The couple reside in East Nashville in a neighborhood that Croce describes as something of a hipster haven and filled with musicians. Among the notable performers who live within a stone’s throw of the Croces are Robyn Hitchcock and fellow San Diegans Steve Poltz and Chris Thile, the host of A Prairie Home Companion. “Nashville is the center of music right now,” Croce says. “It’s all really happening here. It’s not as happening in New York; not as happening in L.A. Nashville has become the place for all music, for writing, recording, publishing, everything.”

He plans on taking advantage of his new town and all it has to offer and plans on staying busy with his music. With so much under his belt, Croce could rest on his laurels, but he is always trying to up his game. “I’m always trying to be a better player, a better writer,” he says.

So what does the new Nashvillian have to say about his old hometown? “It will be great to be back in San Diego,” Croce says. “I lived there most of my life. It will be great to see some old friends and family. But of all the major music markets, it’s the one place in the country that’s not playing my new album. New York, Houston, L.A., everywhere it’s getting airplay but San Diego.” Croce admits that his music is difficult to fit into a genre, but it seems that some station within the county would find some time for airplay for one of our own.

Despite the lack of radio support, the concerts have sold well. Croce says, “It’s humbling that the first concert sold out so fast and that we were able to add another concert at the Belly Up.”

A.J. Croce performs at the Belly Up on Wednesday, January 3, and at Saint Peter’s Episcopal Church in Del Mar on Thursday, January 4.

The Blue Guitar: A Local Mainstay Reborn Yet Again