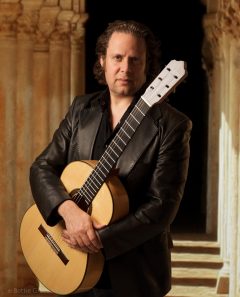 Scot Tabor is clearly enthused. He comes close to stammering as he speaks. “You bet I’m excited!” he says. “We’re putting on a big show!

Tabor is the owner of Paper Moon Music, the highly praised music instruction studio in Ocean Beach. Though there is much to keep him excited–a busy schedule of educating eager music students and schedules of recitals–Tabor’s present state of excitation is over his preparations for a concert by classical/flamenco guitarist Adam del Monte and his trio. “Adam is world-class,” Tabor adds.

It is a return visit to Paper Moon for the world-renowned guitarist. “We’ve had Adam here before to perform, but that was only him performing solo. We had the performance at a smaller venue, but it was still a sold-out show, with 30 or 40 people in attendance. The concert this month is for a larger audience. It’s Adam and his trio, which is Adam with a cajon player and bass player.”

Adam del Monte has performed at New York’s Carnegie Hall and Lincoln Center, as well as Chicago’s Symphony Hall. Other performances have taken him to London, Colorado, Spain, and Israel. He has recorded on the Deutsche Grammophon record label.

His music has been heard in popular movies with credits that include Knight and Day, Toy Story, and Mr. and Mrs. Smith. He worked with John Williams on the soundtrack to Steven Spielberg’s Munich. Del Monte is on faculty at the Thornton School of Music at the University of Southern California.
Del Monte employs the varying textures and timbres of the classical guitar to the instrument’s fullest extent. The combination of technical facility, sensitivity, and expressiveness–all with a great sense of time–distinguishes him as one of the greater living masters of classical and flamenco guitar. “He is a flamenco guitarist, but when he performs with his trio it’s all original music,” says Tabor. “He incorporates modern music and jazz into the flamenco genre.” The concert is scheduled for the tenth of this month at seven o’clock in the evening.

Originally from Spain, del Monte studied music and guitar in England. His training and performing started at an early age and included the music of Deep Purple and Jimi Hendrix. Earlier this year, he told Maxwell Heilman of Chimes, the student newspaper at Biola University, “When I was nine or 11 I would go visit my newly adoptive family in Granada. I would go and play in these caves for dancers and singers.” As for his own compositions, del Monte told Heilman, “Writing my own music gives me the authority to write how I want and change it whenever I want. I’ve been known to change songs over the years if I felt that I found a better phrase or a better passage… I own it, so I can do what I want with it.” Del Monte has just recently started teaching at Biola.

Paper Moon Music, in Ocean Beach, has been around for about ten years. Music lessons have expanded from guitar to include bass, ukulele, piano, and saxophone. You can even learn banjo and lap steel guitar at Paper Moon. Parents have said that they appreciate the fostering environment. Older students say they don’t feel awkward being students there, as they see other folks their age taking lessons.

“The concert will be at Tango del Rey,” says Tabor. “We think that, with its Andalusian atmosphere, it’s a perfect setting for this concert.” To step into the Tango del Rey is to be transported off to the Iberian Peninsula. Moorish arches and rococo designs occupy every square inch of the performance venue. Add in the El Greco inspired artwork, and the architecture practically screams Spain! Spain! Spain! The venue has been home to belly dance performances, but it has also been home to the Hep Spot a swing dance venue.

Tabor says that the program for the evening will include a presentation by luthier Len Laviolette. The San Diego-based woodworker turned guitar maker is renowned for his innovative and beautiful designs of classical and nylon-stringed guitars. Among the performers for whom Laviolette has made instruments are local guitar greats Fred Benedetti and Peter Sprague. “Right now, Len is the only luthier we have scheduled, but we might try to include other luthiers as well,” Tabor says.
“We’re hoping the word gets out there about the show,” Tabor says. He is pleased that news of the show is spreading from students to others and that there is a lot of excitement over the concert. Of course, there are a lot of students and guitar players who are interested in going to a performance in which their chosen instrument is played well, but Tabor says that this concert is certainly meant for folks even if they are not guitarists. He says, “Everyone will find something to enjoy in this great music.”

Be Love. Be Still. A Story of Jeffrey Joe Through a Facebook Lens