February 2023
Vol. 22, No. 5
Sweet Home La Mesa Has a Ring to It! by Raul SandelinMay 2015
Jeff Beck: A Tribute by Ted BurkeMay 2015
Marcus Petronius Bashore: The Best Seat in the House by T.E. MattoxMay 2015
Pacific Wave: A Surfin’ Safari May 2015
The Winter Dance Party 1959: The Night the Music Lived by Terry RolandMay 2015
Back with a Bang! Java Joe's Reunion at San Diego Folk Heritage by J.T. MoringMay 2015
Book Review: The Philosophy of Modern Song by Bob Dylan by Ted BurkeMay 2015
Rick Nash: Bass Man in Demand by Wayne RikerMay 2015
Mod Revivalists the Trebels to Reunite for 40th Anniversary Show by Jim TrageserMay 2015
If Music Be the Food of Love, Play On: Dually Noted Pairs Fine Food and Fine Music by Paul HomiczMay 2015
Advertisements 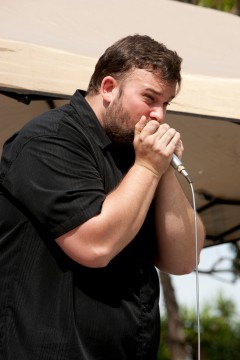 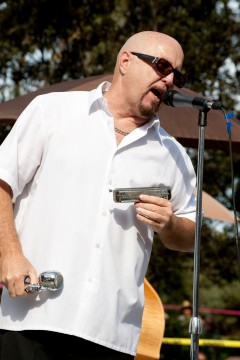 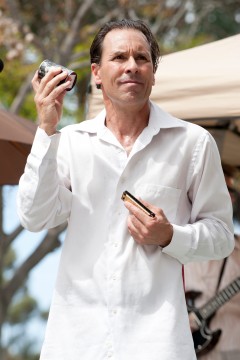 Who would’ve thought that milquetoast La Mesa would morph into a blues powerhouse every April as several hundred suburbanites transform Harry Griffen Park into the south side of Chicago for the annual La Mesa Harp Fest. (You think I’m being facetious, don’t you?)

“Officially we have 500 attendees,” explains organizer Harmonica John Frazer. “I believe there are more than that, but that is what we are permitted for.” Throughout the day, people stream in and out. An added dance area allows 500 suburbanites to get funky like only 500 suburbanites can. But, stop making fun of the aging baby boomers. The 53-acre park does take on the air of many outdoor concerts of yore. The music bounces through the forest and down trails. And, pretty soon, it’s 1972 all over again. Actually, people of all ages, young and formerly young, either stand or bring lawn chairs. Plus, there’s plenty of grass to sit on.

“Some of our major sponsors are Bill Howe Plumbing, Gator by the Bay, Hodad’s, and Depot Springs, which we added this year. We donate to the Blues in the Schools program.”

This year’s headliner — Kim Wilson (what can I say?) — is one of the premier blues harmonica players in America. He calls his own playing a “very modern” take on a traditional music form that is thoroughly his own. “The notes you’re playing only happen once.” Kim has played with the greats, including Muddy Waters, Carlos Santana, Bonnie Raitt, Paul Simon, Buddy Guy, and Keith Richards, not to mention his band the Fabulous Thunderbirds. It’s not an understatement to say that Kim Wilson, along with longtime collaborator Jimmie Vaughan, made the Austin, Texas Blues scene what it is today.

If you haven’t been to Harry Griffen Park, you’re in for a treat. They’ve built a top-notch amphitheater into the hillside, making it a sizable venue. The park also produces a summer concert series each year.

Dane Terry & the Cadillac Wreckers “mostly draw musical inspiration from the old Gospel, country, R&B, jazz and blues American music from about the 1930s through the 1960s.

Lance Dieckmann, a San Diego native, has been a vocalist and harmonica player for several San Diego bands and is considered one of the best blues harp players in town.

Bubba McCoy is a singer and the harmonica player fronting the “Unreal McCoy” Band.

Zachary Cole grew up with harmonicas. He ran the San Diego Harmonica Store out of his dad’s bookstore in La Jolla for many years.

Chet & the Committee front man Chet Cannon says, “We’ve been playing the blues as the Committee around San Diego since the summer of 2001.” The band’s Don’t Get Me Started! CD was SDMA-nominated in 2006 for Best Blues Album.

Billy Watson fronts the International Silver String Submarine Band, combining humor and audience participation with the blues. Billy has performed at all but one of the last 16 Harps Fests.

Big Jon Atkinson is a very serious player who, in a very short time, has played with some of the greatest blues musicians on the planet. Jon says, “I started playing harmonica two years ago. I could already hum you every Little Walter and Big Walter solo on any tune, so it was just putting it to the actual instrument.”

Sets by Steve Bulger & 145th Street and Harmonica John, along with an “Unknown Players Jam” and “Headcutters Ball,” round out a long, yet extremely rewarding day.

In more harmonica news, a Smith & Western/Rusty Faulk Bucket List Reunion was held at the Renegade in Flinn Springs on Sunday April 19. Rusty, who is battling stage four cancer, played harmonica for Smith & Western when they won top band honors at the CMA-International awards in 2002 and 2003. In addition, the individual band members won several trophies and Rusty Faulk took home the prestigious “Little” Jimmy Dempsey Award. Guitarist Tony Butler says, “It was great to get the band back together again and see all of Rusty’s friends turn out.” Among those sitting in with the band throughout the day was the La Mesa Harp Fest’s Harmonica John Frazer.

Guitar Workshop Plus: An Opportunity to Learn While You’re Having Fun!

Jonathan Karrant: A 20th Century Singer for the 21st Century