August 2022
Vol. 21, No. 11
Steven Van Zandt: Unrequited Infatuations by Eric LiebermanDecember, 2021
Tiki Oasis Celebrates 20 Years of Exotica Mayhem and Fun  by Andy RasmussenDecember, 2021
The Lady Doctors Will See You Now by Laura PrebleDecember, 2021
Happy Birthday, Jeannie! Jeannie Cheatham Celebrates her 95th Birthday this Month by Jim TrageserDecember, 2021
Zach Caplinger: A Gifted Musician in his Own Right by Dwight WordenDecember, 2021
The Return of IPO San Diego: After a Five-Year Local Hiatus, David Bash’s Unique Music Festival Makes a Much-Anticipated Return by Scott SamuelsDecember, 2021
This Saw Is Not a Tool by Derek ShawDecember, 2021
Our Redneck Poet, Merle Haggard by Mark PulliamDecember, 2021
Linda Hoover: I Mean to Shine by Jon KanisDecember, 2021
Tom Griesgraber: Now a Member of the California Guitar Trio by Paul HomiczDecember, 2021
Advertisements 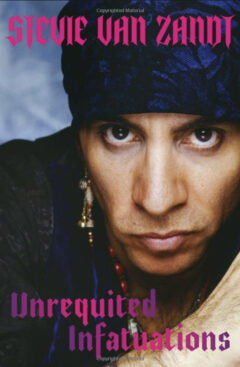 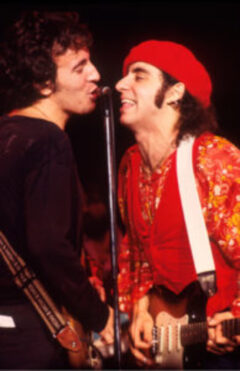 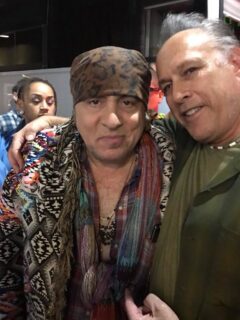 I just finished Steven Van Zandt’s new memoir, Unrequited Infatuations, and my personal biases aside, I believe it’s one of the most captivating books I’ve ever read. It’s almost certainly the most amazing life story I’ve ever encountered.
Steven has been an integral part of Bruce Springsteen’s E Street Band over the past fifty years as well as a highly respected songwriter in his own right, an awe-inspiring front man in his own incomparable 15-piece rock and soul band The Disciples of Soul, and the artistic genius behind Southside Johnny and the Asbury Jukes. He played a major character in The Sopranos for nine seasons and the leading character in Netflix’s first original series Lilyhammer for three, which he also co-produced and co-wrote. He has helped to bring forgotten soul artists from the ’50s and ’60s, such as Lee Dorsey, Gary US Bonds, Ronnie Spector, Darlene Love, The Coasters, and The Drifters back into the limelight, has two radio shows—Little Steven’s Underground Garage and Outlaw County—on Sirius XM, and his own record label Wicked Cool, which has signed over a thousand new bands during the past ten years. Steven has also pretty much single handedly spearheaded a national effort to bring art and music back into our country’s public schools through his Teach Rock Foundation!
The other half of Steven’s book reads something like an Ernest Hemingway novel about some bohemian musician who goes around the world to the most war-torn, poverty-stricken, and politically corrupt corners of the earth, trying to help oppressed indigenous peoples resist and ultimately overthrow their repressive governments. I know that after reading it, I’m convinced that he deserves the credit he receives for helping to bring down the apartheid government of South Africa in the 1980s, even beyond his production of “Sun City” and organizing the boycott against playing “Sun City,” which virtually every major music artist of that time participated in.
If you consider either of the above paragraphs individually, Steven’s life is already fuller than most anyone we know. If you consider them together, it’s akin to learning that international news journalist Clarissa Ward, reporting from behind enemy lines in Syria or Afghanistan, is also in one of the biggest rock ‘n’ roll bands in the world, leads her own rock ‘n’ soul band, produces records for a multitude of other artists and is a major television actor! I’m sure you’d find yourself in literal disbelief to learn that (not that you will), and when you turn it around, it’s difficult not to be in the same state of disbelief about Steven’s life but knowing that it’s somehow all true!
Finally, in spite of such an incredibly full and well-lived life, with more successes across the board than most of us could dream of, Steven still has had room for a lot of disappointments and let downs, hence the title Unrequited Infatuations. But he says that his overarching goal in writing this memoir is not to complain about these disappointments, but rather to hopefully help his readers see that we all face obstacles in life, and it’s all about how we move on from these obstacles, disappointments, and heartaches, and ultimately achieve our own successes.

Charlie Watts: The Heartbeat of the Rolling Stones