January 2023
Vol. 22, No. 4
Charlie Watts: The Heartbeat of the Rolling Stones by Terry RolandDecember 2021
Back with a Bang! Java Joe's Reunion at San Diego Folk Heritage by J.T. MoringDecember 2021
Book Review: The Philosophy of Modern Song by Bob Dylan by Ted BurkeDecember 2021
Rick Nash: Bass Man in Demand by Wayne RikerDecember 2021
Mod Revivalists the Trebels to Reunite for 40th Anniversary Show by Jim TrageserDecember 2021
If Music Be the Food of Love, Play On: Dually Noted Pairs Fine Food and Fine Music by Paul HomiczDecember 2021
Harold in the Land of Jazz by Bart MendozaDecember 2021
Sephardic Dance and Music by Yale StromDecember 2021
Loretta Lynn: A Special Tribute to the Queen of Honky Tonk by Terry Paul RolandDecember 2021
Ben Grace Gilmore: It's All About Building Community by Sandé LollisDecember 2021
Advertisements 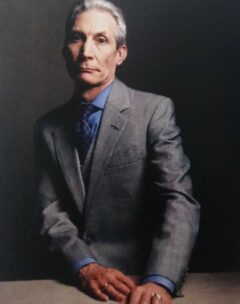 In the beginning: the Rolling Stones.

He was the sense of calm quiet in the midst of the rock ‘n’ roll circus we’ve called the Rolling Stones for the last near-60 years. But his low-key focused concentration was ironically and deceptively covered his pacing, timing, and rhythmic heart beat that gave the life blood to one of the greatest and most durable rock ‘n’ roll bands in music history.
When Charlie Watts died in September of this year, an irreplaceable part of the Rolling Stones passed into history. The band has been actively recording and touring for the last 59 years, an unparalleled feat in the amnesiac business of rock music. But it was his balancing act, both musically and personally, that gave the band their ground and their steady, often unrelenting movement on stage and in the studio.
But, the irony and mystery of Charlies Watts as a musician is that his first love, dating back to childhood, was jazz. He collected the albums of Charlie Parker and John Coltrane. In 1961, he joined Alexis Korner’s jazz influenced Blues Incorporated band. In 1962 he met Brian Jones and the rest is, as they say, history, rock ‘n’ roll history. Later, he released a series of albums with his jazz band, the Charlie Watts Orchestra. I picked up 1991’s From One Charlie, and it is proof positive that Watts knew jazz down to his bones.
In 1969, when I was 14 years old, I sat a few feet away from him at the Los Angeles Forum for the kick off of the band’s return to America after a three-year absence. It was the now legendary Breakfast Show, which started at three in the morning and lasted until dawn. I was seated off to the side of the stage and eye-level with Charlie. I experienced a mesmerizing study in contrast, witnessing his calm resolve as he attended to the movement of the music. I was able to take in the spirit of what he was doing as Mick Jagger and Keith Richards lurked in and out of the photographer’s flashing lights and the outreached hands of adoring fans. Charlie sat like a wise Buddha, knowing the show depended on him continuing, unnoticed, a steady workman.
As the Rolling Stones carry on with their No Filter tour with dates this month at SoFi Stadium in Los Angeles, Charlie will be given the due attention he rarely received—and probably wouldn’t have welcomed—during shows. And the band is certainly in the final days of their long career with his passing. Without Charlie Watts, the vital heartbeat that was the Rolling Stones can only be honored and paid tribute to at future concerts. And as they continue, for however long, the spirit of Charlie Watts will echo in the pulse, beat and foundation he provided for 59 years.