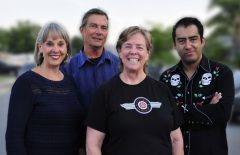 Some Americana bands have unusual sounds, some unusual names. Enter the Blue Sky manages to do both. The quartet is a recent product of the East County roots and open mic scene, and the musical brainchild of founder/front person SandÃ© Lollis. They play coffeehouses, restaurants, and community centers, presenting Lollis’ original songs in often subdued acoustic packages–ballads, waltzes, slices of life, and occasional foot-stompers. Blending genres too much to be easily pigeon-holed, Lollis’ strong vocals and interesting lyrics are the centerpiece in a band that largely avoids showy displays of instrumental prowess.

“In a way it’s random,” says Lollis about the name. ”When I think about my music the color blue kept coming to mind. So Enter the Blue Sky–what I like about that is, you can enter the blue sky from both sides, from above and below.”

As a Navy kid with a father she describes as a storyteller, she comes from a musical family. She describes singing with her late sister while doing the dishes at home. “It’s really all I ever wanted to do, but in those days it was, ‘Hey, that’s all fine and dandy, but you’re going to have to get a real job.’ And there weren’t all of these shows like there are now, all of these opportunities to really make it. Eventually I bought into the ‘You gotta have a day job.’” She calls her current band and musical endeavors not a “second thing, but it’s a return to a first thing.”

Growing up, she was exposed to all different kinds of music and grew to appreciate many styles. Her dad was into jazz, mom into Dean Martin and Polynesian sounds. She became a big fan of pop artists like Cher and Barbra Streisand in their ’70s heyday.

“Both of them have really big voices, expressive, and I would get my amp and mic and just sing with them all day long; I like to say I trained with them because I did, all day long, and it made me really unpopular with my peers. I was the eldest in my family and I didn’t have anybody saying, ‘Oh, you should be listening to Def Leppard, or Led Zeppelin.’”

Inspired to write poetry by a seventh-grade English teacher, Lollis learned guitar at 13 and by 14 had a duo with a friend, getting her first taste of writing originals. “We wrote our own songs for a while and then started doing covers. I really wasn’t interested in that.” After traveling to Spain in her twenties and learning Spanish, another step in her musical journey was with a local rock band in the late ’80s and early ’90s, called Lunar Playmate. Then, a two-decade hiatus.

“I spent time away to focus attention on raising our daughter,” says Lollis, who is married to Jazz 88.3 DJ Miff Mole, described as a “great band husband.”

“And, eventually, I realized that there wasn’t any way I was going to go back until I was done raising her. During that 20 years of raising my daughter I had written a song and a half.”

In late 2013, with her daughter now out on her own, she started hitting the open mics in East County roots venues, getting back into singing and meeting other players. The more mature Lollis now gravitated to music that “moved” her, including My Chemical Romance and Annie Lennox.

“I go to a lot of open mics and for me the East County is so welcoming and friendly. Kaffee Meister in Santee is just so sweet.” She holds high regard for other open mics at Bugsy’s in La Mesa (Fridays), California Sol (Saturdays), and Trinitea Tea Lounge in San Carlos (Mondays). These gigs also became the source of Enter the Blue Sky, one musician at a time. Harmonica player John Seever has been with the band the longest–less than two years.

“John’s playing is mystical. I’ve never heard anyone play the way he does; he’s very experimental. He enjoys playing underneath everyone as this dreamy hint of melodic space, and then at other times he is explosively on top and dominant.” His background includes soaking up the blues in Memphis for several years.

Karen Childress-Evans is the classically trained violist, who joined in April 2015. “Karen will go home and work on stuff on her own. She writes it all out and brings a score with her to the next rehearsal, along with excitement, ‘Hey, you’re gonna die when you hear what I’ve got on this piece!’”

The newcomer is Alberto (Berto) Gonzalez, who has been playing stand-up bass for just under two years. He overcomes this inexperience with a spiritual sense and hard work. The band helps put together the arrangements, putting final form to her compositions.

“Every member of this band is so willing to work and collaborate and get to what’s best for each song. They are such a joy. When we play together, when we create together, it is the most intimate of relationships, almost like one united soul pressing upward and outward.” Lollis adds, “I just love, love, love what I am doing and love what the band is doing!”

The dinner hour approaches at DiMille’s Italian restaurant in Normal Heights, on a perfect, balmy 75-degree evening after several warm and humid days. The patio outside is flanked with palm trees and in the corner, three microphones are set up in front of a small stack of amps, and the four members of Enter the Blue Sky wrap up a sound check. Their sound will be augmented tonight by the sounds of the street. Thirty feet away, buses rumble by on Adams Avenue, cars ignore the 25 MPH limit, and two pedestrian signals at the corner of 35th Street variously chirp and beep as if competing for attention.

The pizza is good, and the first song is “Shopping,” a snapshot of the band: Lollis plays acoustic guitar and has a powerful beacon of a voice, which the band frames, and there are stories being told. The lyrics stand out on “Hold On,” “Let’s shut out the darkness/ And try to stay warm.” The band moves confidently through the first set, with several breakup ballads and the occasional storyboard of a tragedy, while a young boy sitting nearby is staring at the band, speechless, transfixed.

Between songs, Lollis mentions, “We’ve been married for 25 years…not all of us in the band…” She’s clearly in her element and having fun. Waiting for a bus to leave, it overstays and she kicks off the next tune anyway, one with bassist Berto in thump-thump mode on standup. A touching waltz, “Hero,” seems to stop time, a painting of a young girl and her mother discussing the loss of her deceased father, “You used to be a beauty, a prize on his arm/ To love you his duty, and to keep you from harm.” Thirty minutes of listening and Lollis’ talent as a wordsmith is evident. The backing musicians emerge for short bridges and solo spots, but are generally subdued, though a gypsy-inspired hand clapper, “I Really Want You” punctuates the set, giving Childress-Evans and Seever a chance to stretch out a bit with some Klezmer licks.

Dusk gives way to evening and the patio is filling up with customers. The next set again shows the band’s affinity for folk and bluegrass traditions, especially 3-4 time: on the catchy and absorbing “Ashes,” Lollis posits, “I’d rather be ashes than dust… I’d rather be a song than a book.” Other tunes that grab the ear include “The Man in Me,” a study in minor modes using the harp and viola for darker shades. This darker trend is seen again in another ballad, “Who Knows,” a vocal power play with lyrics that lay it on the line, “I want an hour, you want a day/ I stand to lose more than to gain.”

After another break, a lighter moment is “Voice to Text,” a mid-tempo shuffle about love in the digital age, and more waltz ballads are in store. It is a varied and interesting menu–the food pretty good as well–and the atmosphere just fine for roots music on a summer evening.

“We have been recording,” says Lollis, “and we have a new CD, which will be released on November 5. It’s kind of funny because we’ll probably have to follow it up really quickly with another thing because it’s like the classics that people have known for the last couple of years or so, and now there is all of this other stuff that we are creating. We will have to do some fundraising to make that happen, but that’s something we’re working toward.”

As a songwriter, Lollis sweats the details. She feels that speaking Spanish, taking an acting class, and her day job as a writer and editor help.

“I feel like, as a writer, I can take bits and pieces of fact and weave them into a fiction that is a convenient fiction, say. I really do agonize over the words I choose. On some songs, like ‘Like an Angel,’ I put the word ‘relinquish’ in it. I can’t think of any song that has that word. To tell you the truth, it just flew out of my mouth, and I just went, ‘That really fits well with what I am saying, so this is like perfect.’

“‘Hold On’ is a big favorite of mine. My mom is of advanced age, and she’s a headstrong fireball, as her doctor says. She’ll say things that I just hold onto–she said, ‘I am an old, old woman, and I don’t need anyone.’ So I went, ‘Aw, that’s a line.’ So that’s how that song starts out. A lot of what I’m doing when I’m writing is, I’m organizing. When that song starts out, it’s in first person, the first version is an old woman’s view, the second an old man’s view, the third a young child’s view, and then my view as a middle-aged woman.”

“The same with ‘Hero,’ which was inspired by my mom. My sister died when she was 43, about 12 years ago, so that’s part of that song.”

For now, the immediate goal for Lollis and Enter the Blue Sky is to promote their new CD and to be entered in local and bigger, even international competitions, and larger local gigs and festivals. And beyond.

“People say what to you want to do? I want to go all the way. I am 58 years old, you know. I just feel that it is different enough that it could work out.”

The early returns are a encouraging.

“What we found everywhere we played–and it still amazes us–is that every age group and every kind of style of person seems to be able to find something to enjoy about it. I had a ten-year-old boy come up to me the other day and say, ‘Nice music.’ Then we have boomers, and people in their 80s and 90s saying, ‘Oh, you guys are so great.’ It’s just, every time it happens, we’re like, ‘Wow, somehow they’re able to find it.’

“It always cracks us up that because we don’t look like or fit the ‘rock star’ mold or whatever; people don’t know what to expect. Sometimes after a gig, people will say ‘Wow, you guys were actually good.’”

Notes from a (Reluctant) Music Teacher