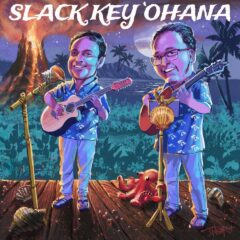 In my most mad scientist imaginings, I picture myself in possession of a time machine, one that not only allows me to traverse the ages but one that lets me finagle with the particulars of history. Not the big things, like the birth of Jesus or the fall of the Roman Empire, just some of the small incidentals of times past: the type of pen Lee and Grant used when they signed the terms of surrender at Appomattox, the number of elephants that Hannibal used to cross the Alps, the type of strings on John Lennon’s guitar when he met Paul McCartney.
In one such alternative history, I imagine Brian Wilson born and raised not in southern California, but somewhere on one of the islands of Hawaii. Mike Love and all the others who would comprise the Beach Boys would spend their youth there as well. The resulting Beach Boy hits in your grandparents’ record collection would ring not with the strains of southern California but with the sounds of the islands that make up our 50th state. Instead of Pacific Palisades, Manhattan Beach, and La Jolla, “Surfin’ USA” would wax over Waianae, Mokuoloe and other surfing destinations of Hawaii. And that little old lady would be from Hilo, not Pasadena.
I offer this thought experiment to give an idea of Slack Key ‘Ohana, an EP of five Hawaiian confections from Brian Witkin and Kamaka Mullen, otherwise known as Slack Key ’Ohana. Except for the instrumental, “Kahuku Slack Key,” the songs are what one might suppose from a melding of traditional Hawaiian music with the Beach Boys, sweet lilting melodies with sweet harmonies on top.
Just as Django Reinhardt’s use of minor key tonalities in interpreting American swing forever cemented the contours of Gypsy jazz, Hawaiian greats, such as Sol Hoopii and Joseph Kekuku (as well as state-side practitioners of Hawaiian music like Roy Smeck) established the sound of Hawaiian music with their use of slide guitar, ukulele, full-throated harmonies, yodeling, and song forms of American Tin Pan Alley and jazz. Witkin and Mullin keep true to these traditions, the ukuleles, harmonies, and everything.
The two play all the instruments, with Rand Anderson adding some dynamite pedal steel guitar. The recording and engineering are really pro, and the CD artwork, layout, and design by Tom “Thor” Thordarson and Natasha Germine are clever and spot on at hitting that Hawaiian vibe.

LINDY AND THE HOPS: Kicking and Screaming