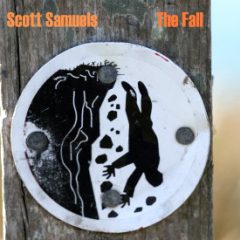 Perhaps best known for the energetic recordings and live appearances in the San Diego-based power pop outfit Roxy Monoxide, guitarist Scott Samuels has opted for the singer-songwriter modus operandi on his new six-song EP, The Fall.Â The best attributes ofÂ  Roxy Monoxide — melodies and lyrics — have followed Samuels on this current stop in his musical sojourn.

On the disc Samuels is backed by the Vinyl Pirates; when you think about it, that’s a cool title for a band. It conjures up the imagery of wading through a sea of records, looking for obscure tracks to for a band to learn and play as part of a club set.Â  Scott’s swashbuckling rogues are Kevin Lydy on bass, Scott Spindler on piano, and George Lewis on drums. There’s additional drumming by Scott Southwood, and Rio Peligroso frontman Michael Rennie adds a tremolo guitar to the proceedings.

The title of the EP has a double meaning.Â  Initially, the recording process began during the autumn of 2013. “The Fall,” the opening tune, is also a reference of “falling” head over heels in romantic bliss before reality provides a swift kick in the posterior. There’s a word for the current generation of self-absorbed couples ( is the word “entitlement?”) and the final chorus of the song finds Samuels dishing out the just rewards for such narcissism.Â  In addition to three other original compositions (“Timing is Everything,” “Thinking Too Much,” and “Nothing Left to Prove”), the EP features the wonderful “If I Could Start Today Again”Â  (written by Australia’s Paul Kelly) and the Roy Wood yuletide classic (at least in the UK) “I Wish It Could Be Christmas Everyday.” While the back cover of the EP shows falling leaves, Scott Samuel’s latest collection would sound just as good while sipping a cold one in the heat of August. (Available at Amazon.com and CD Baby)