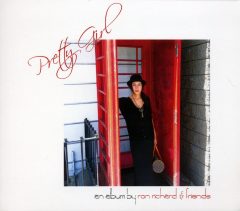 After playing in several San Diego bands, including stints with Clay Colton and Ryan Hiller, Johnny Tarr, and others, singer/harpist Ron Richard has released an EP titled Pretty Girl. Attributed to Ron Richard and Friends, the six-track disc is definitely a collaborative work: Richard wrote the tunes but only sings on four, playing percussion on the others. The music is a pastiche of various AOR-styled approaches, as if Richard were throwing ideas at a wall to see if they would stick. They aren’t unsuccessful, but it’s tough to find a musical identity when one tune has Beatle-effect backwards guitar, the next rootsy slide dobro, and the next is an jazzy wah-wah/sax instrumental.

“All These Times” opens, a pleasant rocker with Hiller shredding mightily (he does this on most tunes), and Richard singing and playing harp; it is lifted by keyboard touches by Jeff Chimenti. A big-production ballad that clicks is “My Love for You,” as Chimenti’s Hammond B3 is joined by Sven-Erik Seaholm on backing vocals and mellotron — the buildup morphs into a sort of psychedelic outro that surprisingly fits the vibe.

The title tune opens promisingly enough but runs out of steam, lacking a memorable hook. “Healing Pool” is a better song, nicely sung by Seaholm and Brooke Mackintosh; good Chimenti keyboard work again, and it isn’t spoiled by Hiller’s overplayed machine-gun lead guitar solo. The disc closes with an interesting, maybe puzzling instrumental track, “Skyline,” with Tarr’s sax over the top of a funk beat, again with fiery fusion breaks by Hiller.

Ron Richard and Friends’ Pretty Girl has its moments

THURSDAY NIGHT FISHING CLUB: When the West Steals Your Heart

DUSTY & THE LOVENOTES: Back Burner