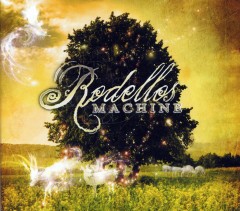 Rodello’s Machine is a home-grown San Diego duo consisting of Nate Donnis (acoustic guitar, lead vocals) and Kolby Knickerbocker (acoustic guitar, vocals, bass, percussion, keyboard, piano) that formed in 2009. Their debut EP, also titled Rodello’s Machine (a name that appeared to Donnis in a dream), features six original songs written by Donnis and Knickerbocker, recorded locally at White Horse Studios, and produced by Knickerbocker and Brian Karscig. The tunes vary from simple (but lovely) acoustic ballads (“Lila,” “Beauty of Your Life”) to complex arrangements featuring strings and Beach Boys-inspired harmonies (“Rock Under My Feet,” my favorite track on the EP) and Dave Matthews Band-influenced melodies (“Sails,” featuring Knickerbocker on lead vocals). Lyrically, most of the tracks are love songs, which keeps the tone happy — even sweet. In a similar vein, “Three Weeks to Go” is a heartfelt welcome written to an unborn child from the perspective of an expectant father (with lilting Beach Boys harmonies in the background). The only exception to the love song theme, “Pause,” is a surprisingly upbeat song about moving on from a relationship (with subtle strings in the background). Rodello’s Machine, which has opened for Blues Traveler, describes their musical influences as groups like Wilco and Animal Collective, which is to say eclectic. No matter. If the taste provided by this EP sampler is any sign, there are good things yet to come from Rodello’s Machine.