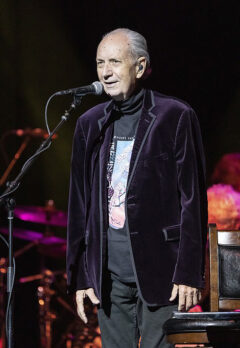 Michael Nesmith at a recent show.

When Michael Nesmith died last month, on December 10, the world lost not only a figure who was loved for his contributions to popular music over many decades, we also lost one of the primary musical visionaries of the last 50 years. If his short time with the Monkees as a television star assured his place as a popular cultural icon, it was his innovations in expanding the role of music videos that would alter the cultural landscape of popular music. In interviews after the release of his Grammy-winning musical video comedy opus, Elephant Parts, he correctly compared the new approach to music videos as being something akin to the 1950s discovery of rock ‘n’ roll. It was the beginning of MTV. A new visual dimension was added to mainstream rock music.
As a country-rock singer-songwriter, he was without peer, writing such classic songs as “Papa Gene’s Blues,” “Different Drum,” and “Some of Shelly’s Blues.” Along with the Beatles, Buffalo Springfield, and Gram Parsons, he was among the first to record the unique blend of country-rock. But more than anything, it was his loving devotions to his fans, friends, and family that infused his music. Perhaps one of his greatest contributions was allowing the great pedal steel guitarist, Red Rhodes, to musically soar with him on such classic songs as “Joanne” and “Silver Moon.” The band also included James Burton, Ron Tutt, Glen Hardin, and John Ware.
The following is a re-print of the feature article I wrote for Michael Nesmith in 2014 when he appeared at the Belly Up in Solano Beach. He was kind enough to answer a few questions via an email interview. His performance that night was a joy to behold. He was an engaging, storytelling master weaving a narrative through each song that brought the show together. He was clearly in his element.
******************************************
Michael Nesmith: The Rise of the Cosmic Monkee
If any Texas-born country singer-songwriter could be considered a cosmic cowboy it would have to be Michael Nesmith. After even a brief perusal of his ’70s solo albums it becomes clear that if Gram Parsons coined the term “American Cosmic Music,” Nesmith certainly defined and expanded it. A listen to his current album, Rays, solidifies his credential as a surveyor and journeyman in the American music landscape extending beyond any label, which he believes only limits the first-hand experience of music as something words cannot capture. How do we label or define something so elusive? According to Nesmith, “I steer away from labels and especially generalized or categorizing ones—words aren’t precise enough, unless they are made up.”
These thoughts reflect the experience of Rays, which combines styles and textures into something ethereal but still connected. It is musical alchemy at its finest. He continues today with the same approach as his early Monkees days, pushing the envelope just a bit ahead of the rest of the crowd in the music business.
As executives, record companies, artists, and producers have scrambled to keep up with the changes in the music industry, Nesmith remains the pacesetter with new adventures like Video Ranch 3D, where audiences are invited in real time to experience a virtual concert. If it fulfills its potential, Nesmith may once again be a jump ahead of us all in terms of how we experience music as individuals and as a community.

From his beginning days as a host of Doug Weston’s Troubadour on the Monday Hootenanny nights to his first song-publishing gig with the New Christy Minstrels’ Randy Sparks, it was his good fortune to be cast in the pre-fab’d four television band, the Monkees, which would place him squarely on national television and the pop music charts. From 1965 to 1968 the Monkees would sell millions of records while America tuned in to the comparatively hip-minded, Hard Day’s Night-inspired TV show smack in the middle of broadcasts that included I Dream of Jeannie and Bewitched. The production team behind the television show was the same that would later bring us Easy Rider, Five Easy Pieces, and the career of Jack Nicholson.
While few of his own songs were used during the Monkee’s era—one notable exception was the way-ahead-of-its-time country-rock song “Papa Gene’s Blues” from the first Monkee’s album—he managed to archive most of his songwriting for other artists and future use.
Nesmith’s thoughts about the Monkees’ lasting legacy are uncertain. “I’m not sure where the Monkees are in rock ‘n’ roll history, since that history is still being written by the hands of time,” he said. “If I had to guess I would say that television will figure prominently in what the Monkees were and what they meant to their audience.”
However, the Monkees would endure to become one of the more durable pop bands of modern times. Nesmith’s contribution to them proved fairly sizable as he helped steer them from television fiction to a real band through their most successful days of touring and recording. Today, the Monkees recorded legacy holds up as substantially good pop-rock music, well-crafted songs, expert studio production, and a vibrant energy that holds water today.

One of the main contributions of the Monkees, who have recently been inducted into the Pop Music Hall of Fame, was the bridge they provided between the Brill Building stable of songwriters waiting to break out from the conventions that had begun to stifle them. The singer-songwriter movement that had its roots in the late ’60s and would later give birth to the careers of James Taylor and Carole King. Songwriting credits on their first two albums reveals some of the best of the era, including Carole King, Gerry Goffin, Neil Sedaka, Carol Bayer Sager, Neil Diamond, and David Gates. And, of course, their classic, “Daydream Believer,” was penned by San Diego’s own native son, the great John Stewart.
The other major contribution coming from the Monkees’ legacy, which Nesmith may not admit to, is Michael Nesmith himself.
From 1965 on, he began to make his mark as a skilled and gifted songwriter. It was a mark that would largely go unnoticed as he wrote songs recorded by artists as diverse as the Nitty Gritty Dirt Band (“Some of Shelly’s Blues”), Linda Ronstadt (“Different Drum”), and Paul Butterfield Blues Band (“Mary, Mary”).
In 1970, following the Monkees’ first demise, Nesmith’s career as a country-rock recording artist was assured. During the early ’70s he would release a series of albums that increased the scope of what Gram Parsons was calling “Cosmic American Music,” which would find a home a few decades later under the label “Americana.” However, staying true to his own experience and philosophy, Nesmith says, Americana is one of those words that almost gets it right, but the spirit and the sound are elusive to verbal or written description, like most art. I know it when I hear it, of course, and, yes, it resonates with me—but I don’t use the word to express it.”
His solo career trajectory proved to be a unique one—broad with rock ‘n’ roll visions, honky-tonk poetry with distinctive Hoagy Carmichael-like melodic twists in style. While his albums didn’t burn up the charts, he had two moderate hits songs in “Joanne” and “Silver Moon.” A later song, “Rio,” would also prove to be well-loved over the years.
The series of albums of the ’70s with titles like Pretty Much Your Standard Ranch Stash, Infinite Rider on the Big Dogma, and From a Radio Engine to a Photon Wing were imaginative, well-crafted, and consistently well-executed records. However, what many fans and critics may consider to be his best work happened in 1972 when he was left without a band and was still under contract with a record to make. And the Hits Just Keep on Coming is an eloquent and beautifully conceived album that includes just Nesmith and steel guitarist Red Rhodes. The exchange between the two musicians reflects personal bond between them that comes across clearly on the album.
But, going back to his earliest days as a Texas folk singer, Nesmith was a restless soul, always looking for something new—a breakthrough. He would find it in the early ’80s and, once again, television would provide the direction. In 1981, Nesmith released the innovative, comical, and entertaining Elephant Parts. Widely considered to be the first music video, it consisted of comic skits with video presentations of original songs by Nesmith. It would win the first-ever Grammy for a music video the same year. Later, in 1985, he would continue the concept with a short-lived summer replacement series called Television Parts. Guest artists included Garry Shandling, Jay Leno, Jerry Seinfeld, Whoopi Goldberg, Arsenio Hall, Jerry Lee Lewis, Rosanne Cash, and Jimmy Buffett.
Clip from Nesmith’s Elephant Parts.

Following the success of Elephant Parts in 1981, Nesmith executive produced a show called PopClips to be broadcast on the still-fledging cable media outlet. It was the same concept as Elephant Parts without the comedy, which allowed major artists of the day—like the Pretenders, Thin Lizzy, and even the Rolling Stones—to release video promotions for their newest work. The show was bought by the youth-oriented Nickelodeon channel but soon became the basis for the launch of MTV. The rest is television and music history.
Throughout the intermittent years, the Monkees would experience comebacks and reunions, the first being their 1986 tour that found them a top concert draw and their greatest hits and even an early release—The Birds and the Monkees—back on the charts. Although Nesmith was happy with the new-found success for his old band, he only joined them onstage at the Greek Theater in Los Angeles. Reunions would be reoccurring through the years for the band, but he would return to full-time touring with them after the untimely death of bandmate Davy Jones in 2012. The 2012 through 2013 Nesmith version of the Monkees would continue the band’s critical and commercial success of previous years with their final shows of 2013 being considered among the best ever in their long history.
Nesmith’s trade seems to be in the first-hand experience of art that he has sought to put into the hands of the audience as both participators and fans. It is really a much larger scope, vision and experience than most consider making today’s techno-rush seem static in comparison with our downloads, headphones and frequently passive and emphasis on isolation over community. With all of his experience in technology, he continues to thrive on audience contact. “I started as a live performer—in front of audiences—and never really stopped. TV and film were hard for me. I love the moment and the interaction between the crowd and performers, since I feel we are all on stage together, creating our worlds.”
With his current tour and as he brings his particular magic to the stage (and your computer screen), Michael Nesmith carries on down the same path he began, walking with integrity, imagination, and his own brand of creative genius.