HEAR360 dishes up an amazing plate reverb plugin that looks back and forward at the same time. 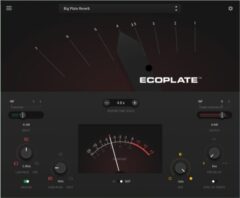