February 2023
Vol. 22, No. 5
Raelee Nikole Steps into her Spotlight by Tabitha HernandezApril 2014
Jeff Beck: A Tribute by Ted BurkeApril 2014
Marcus Petronius Bashore: The Best Seat in the House by T.E. MattoxApril 2014
Pacific Wave: A Surfin’ Safari April 2014
The Winter Dance Party 1959: The Night the Music Lived by Terry RolandApril 2014
Back with a Bang! Java Joe's Reunion at San Diego Folk Heritage by J.T. MoringApril 2014
Book Review: The Philosophy of Modern Song by Bob Dylan by Ted BurkeApril 2014
Rick Nash: Bass Man in Demand by Wayne RikerApril 2014
If Music Be the Food of Love, Play On: Dually Noted Pairs Fine Food and Fine Music by Paul HomiczApril 2014
Mod Revivalists the Trebels to Reunite for 40th Anniversary Show by Jim TrageserApril 2014
Advertisements 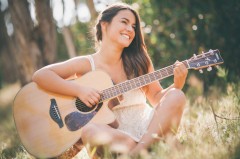 At the age of 18 most of the population was graduating high school, making plans for college, working a part-time job, or just hanging out with friends and taking some time off, but Raelee Nikole is different. After graduating high school in May of 2013 and receiving acceptance letters from two California colleges Raelee made a difficult decision to follow her gut instinct with the support of her family; she decided to forego the college route and pursue her dream of music. Since then Raelee has been playing all over Southern California, writing new music, recording, and making plans for the future. I was fortunate enough to sit down with this busy young lady to chat a bit after her second performance of the day — a show at the well-known coffee house/music venue Rebecca’s in South Park. As we sat down on the edge of the stage where she had just performed an hour and half long set, Raelee’s excitement from the show was still evident on her pretty face. She wore a bright white smile and her eyes sparkled as she wished the last of her eager fans goodnight and turned her attention to me.

The extensive set that had ensued was impressive, a mix of new and original songs as well as popular covers from such varying artists as Tracy Chapman, Bruno Mars, and the Lumineers among others; but with a spin on the well-known songs all her own. The warmth and rapport that was exhibited on stage was that of a seasoned, lifelong performer so I was naturally surprised to discover that she only recently had experienced her first on stage performance there at Rebecca’s in July of 2010 at the age of 15. As if that was not shocking enough, she had just learned to play the guitar six months prior to that first performance. As regular patrons of Rebecca’s, Raelee’s grandparents and her great uncle told Raelee about the popular Open Mic Night and had insisted that she play on stage at least once. Young Raelee agreed and giggled as she reminisced on that first performance where she strummed her guitar while reading off her sheet music and nervously sat in a chair on stage as she sang along to a Taylor Swift song. The change from the picture she painted of her first step into the limelight to the performance of the evening was a vast difference. The show that had just ended showcased a woman ready to take on the spotlight as she had laughed with the audience, told personal stories of her songs, and invited a fellow musical friend, Kimo, to share the stage with his cajon for a few sets.

The natural magnetic energy that Raelee possesses on stage had turned an empty coffeehouse on a chilly Friday evening into a standing-room-only venue by the end of her set, complete with a line of fans waiting to meet her after the show. I asked Raelee about a promotion she had mentioned at the beginning of her performance called “Take Me to Your Heart” that she had launched in January. She explained that it was an idea she had come up with to encourage people to come to more than one show when she realized she had over booked herself that month. Instead of only scheduling two shows for the month, she had committed to four so she used it to her, and her fans, advantage. The promotion worked as such: when a person attended a show, they would receive half a colored paper heart and at the next show, the other half of a different color paper heart would be given to the fan; once a full heart was made, the person would be able to receive a free song download from Raelee. A brilliant marketing plan had been thought up from a minor scheduling error. Raelee explained that she spends her free time between shows working on music, promotions, booking shows, responding to emails, and making herself lists of plans for the future. Raelee said, “I have thousands of to-do lists and at the bottom of every single list is to make a new to-do list.”

Currently a big item on her to-do list is an extended traveling tour. Since beginning her music career in 2010, Raelee has stayed close to the San Diego area due to high school and her age but now in the works is a West Coast tour. Traveling along with other local musicians and friends such as Mason James. The basic idea is to work from San Diego to L.A. and up through San Francisco and Seattle but no dates have been decided as of yet. An additional plan in the stages of being drafted by Raelee is a “San Diego Locals Tour” in which a different local business, place, or neighborhood here in San Diego would be highlighted each week through online media promotions and mini-concerts given at that business. At the conclusion of the month all the businesses from the previous weeks would be brought together for a large show, an idea similar to the music festivals on Adams Avenue and other local neighborhood promoters. The idea focuses on supporting the local community and appreciating what San Diego has to offer. Raelee wants to use her music to help promote hometown businesses that she feels are vital to San Diego. For Raelee, the main project in motion right now consists of her efforts to record an EP album, funded either through Kickstarter or possibly something bigger but the negotiations are still too early to be noted just now. Raelee says her overall goal is “to keep doing what I am doing but on a bigger scale.”

At a time when young musicians seem to be ruling the industry with artists such as Taylor Swift, Justin Bieber, and Lorde; the setting seems perfect for Raelee to step up. I asked San Diego’s sweetheart if she sees a record deal or possibly something larger in her future. Raelee turned solemn as she thoughtfully replied that when she first began performing a record contract was her main goal. Now, however, the feeling and rush she experiences from her music and performing has transformed from her initial record deal desire to a part of who she is. Her feelings now are more about the music and the fans. She says, “I play a room and people come to see me and a song I wrote, which means a lot to me that it means a lot to them.” Returning to her sunny personality Raelee proceeds to go into detail about Kickstarter and how in today’s music business an artist doesn’t have to “sell out” to get ahead, referencing Mumford and Sons as an example of becoming popular while maintaining a sense of self. Raelee quickly mentions that she is happy as she can do gigs because she wants to do gigs and write the music and play what she wants to as an independent artist without any worries.

With the mention of Mumford and Sons I asked Raelee who her musical influences are. Her voice is reminiscent of Colbie Caillat but her guitar style and stage presence are a happy and sunny mix that make people want to bask in her music and forget their troubles. Without much of a pause Raelee responds that San Diego is her greatest influence. She feels as though her music sounds like a San Diegan’s and namesÂ  Jason Mraz as a role model. Raelee goes on to explain that she aims for a sound that is unique to her. “Most people see a girl singer and expect her to be country but I’d rather be a female version of Jason Mraz or John Mayer,” Raelee says, “because there isn’t a woman performer like them.” She smiles slyly as she tells me she isn’t intimated by performers who are better at singing or playing but she would be [intimidated] by someone who had a similar sound to her, because “that’s her window.” So what is Raelee’s sound? Raelee describes herself as “a little soul with a pop set up as the music is built on verse, chorus, bridge, chorus but it’s not standard and it has to be figured out; you have to go see it.”

This small young woman has big plans for certain and the talent to back them up. The level-headed marketing ideas, plans for the future, and talent to make it all happen are a winning combination that sets Raelee up for a career as bright as her smile. In a short period of time she has worked her way to playing some large venues, including the House of Blues, as well as starting out as an opening act to a headlining performer. Raelee’s spotlight is here and she is ready to take it. Even if she does make it to the big time, something tells me that she will stay down to earth and always keep Southern California close to her heart.

Nathan Hubbard: Encinitas and Everything After