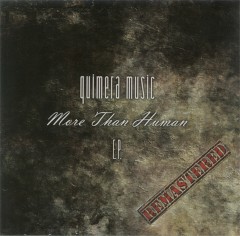 ‘Twas the calm before the storm…as cavernous shadows envelop the night, wind and rain rush along the cobblestone streets. Church bells toll in syncopation with a blackbird’s mournful call — what lurks behind these dark corners ultimately escapes the crypt at midnight.

Quimera Music’s latest masterpiece, More Than Human (Remastered), trips the psyche-fantastic, providing a cinematic backdrop for an alternate universe moored between Heaven’s twilight and the Apocalypse. This opus dei roars in defiant contrast to the ethereal stirrings of the artist’s 2009 debut, Love and Madness, which was reviewed in the Troubadour in June 2010. (A former San Diegan, who once lived in Ocean Beach, Quimera Music now makes her home in Brooklyn, New York.) More Than Human’s rich, sonic tapestries, replete with raging guitars, massive percussions and vocals, set out on a meteoric collision course and nearly self-destructs on its journey to Orion.

From the spectral prelude of “Merula (Overture),” which slips into the maniacal throes of “Angel Slayer,” the album grabs its listeners by the throat and adamantly refuses to surrender its hold. Quimera’s music, defined as symphonic rock, pays homage to the past masters of this mercurial genre, i.e., Moody Blues, ELO, Tangerine Dream, Queensryche, by capturing the unbridled fury of classical and rock music, while redesigning it for the twenty-first century.

In the indomitable “Immortal,” Quimera Music contemplates her own earthly existence without end. She also straddles that finite line between this mortal coil and the hereafter in “Shadows,” only to realize the grave disservice she has extended to the one who truly loves her. The title track, “More Than Human,” emerges from the thunderdome to reaffirm the notion that “we are all part of the same source-one but separated by our own minds.” Among the celestial choirs and herculean orchestration, which soars and builds upon itself, layer by climactic layer, this ode to humanity serves as Quimera’s personal proclamation to live and let live.

One of the most poignant laments ever to be recorded is the enigmatic “Danse Macabre.” The song was created by Quimera and her composer, Patrick after the couple visited the beach areas of New York and viewed the horrific sight of tons of garbage left behind on the shores. This affecting prayer for global redemption urges mankind to take a very long and hard look at what is really happening to this beautiful planet of ours.

Please remember this. We have been warned.