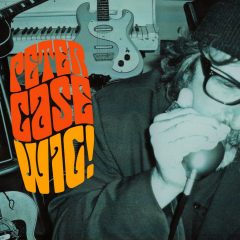 Let’s cut to the chase. If you’re a Peter Case fan you’re going to love this record. The basics include the fact that there are 12 sparsely arranged, blues-inspired songs. Meanwhile Case handles six- and 12-string guitars, bass, piano and harmonica, with Ron Franklin on electric and slide guitar and, crucially for this disc, drummer D.J. Bonebrake holding down the beat.

Fans of Case’s solo acoustic folk/blues material are directed to a cover of a Leadbelly foot stomper “Thirty Days in the Workhouse” and the closing “House Rent Party,” in which Case’s own recent health problems and their aftermath are the focus. While the subject matter may not seem particularly melodic, this is one of his classic story songs; it takes you in instantly, with a hook that’ll have you singing along by the end of the tune. There’s a great line about forming a new band that’ll make you smile. The album is worth the price of admission for this song alone.

But that ending is just the beginning. As great as Case is in solo mode, with a band he’s explosive, and the other songs on this disc truly kick. Basically swampy, bluesy rock, this is an album that’ll carry you through Friday and Saturday night. Play it loud and often.

If there’s a hit single here it’s “Ain’t Got No Dough,” a frenzied garage rocker with a killer harmonica break, a sweet early Motown-type piano riff and a truly universal lyrical sentiment. The follow up would likely be “The Words In Red,” complete with 12-string jangle and classic Case melody shifts, but pretty much everything here is worth hearing.

Production (by Case with assistance from Franklin) is sparse, just the instruments, a voice, a smidge of distortion and a whole lot of reverb. In other words, a perfect match for Case’s blues or rock tunes.

Case’s work was first heard on a single in 1976. In a long and varied career, he’s made a lot of albums in a lot of circumstances, but this one will go down as one of the best, with both an inspired collection of songs and a driven performance.

Bottom line, Wig! is a welcome addition to Cases’s canon and proof positive that his muse is just as strong as ever.