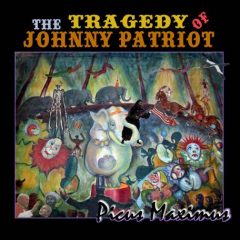 Picus Maximus is a band with great ambition. Their debut CD, The Tragedy of Johnny Patriot, is a sprawling 16-song rock opera that tells a tale of romance and tragedy in the post-9/11 era. The plot is summarized in the CD booklet in a single sentence: “A marriage is torn apart by the events of 9/11, and a young husband’s solemn promise to return home from the war leads to their separation for all eternity.” There is an overture, three acts, a finale, and an encore. The songs are interspersed by a series of written interviews with various characters, unveiling the tale in hindsight. While the lyrics are vivid and descriptive, the text is really essential in getting the full story. It asks the listener to make a greater than normal investment in time and attention, but it’s well worth reading.

While describing themselves as a “country rock” band, Picus Maximus aren’t afraid to cover a lot of musical ground, from the sentimental balladry of “Endlessly” to the unabashedly Pink Floyd-influenced rocker “Four Horsemen.” “Cowboy Anthem” sounds exactly the way you would expect it to, with its bouncy country rhythm and patriotic message. In “Shadows of the Street,” they switch to a minor blues progression whose menacing atmosphere effectively conveys the inner turmoil of the main character. A lot of thought was put into the styles that would most effectively set the stage for each scene.

The core of the band is Jim “Picus” Soldi, who played with Johnny Cash and is now with the Eve Selis band, and Rick “Maximus” Sparhawk, a veteran of the bluegrass and country scene. Sparhawk has an expressive voice that I would describe as an interesting combination of Janis Joplin’s grit and Sam Kinison’s power. (Yes, Sam could be an amazing singer when he wanted to be!) Soldi’s fluency with many guitar styles is very much in evidence. His command of the instrument is renowned, and he does not disappoint on this album. He does it all, from blazing leads to crystalline textures and all things in between. They are accompanied up by a fine group of versatile musicians who create the emotional backdrop against which the events unfold. While Sparhawk’s voice and Soldi’s guitars are very much at the forefront, credit must also be given to the seamless performances delivered by the band. They make a huge contribution to the professional sound of this recording.

Listeners can enjoy this album as a collection of diverse songs with singable melodies and a butt-kicking beat, or they can dig deeper to have a much richer experience. The Tragedy of Johnny Patriot is a bold artistic statement that rocks.

Parker Ainsworth: Gone And Done It