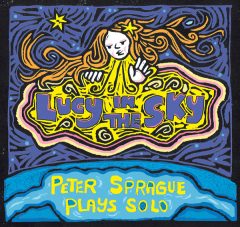 Ever the versatile and prodigious musician, jazz guitarist Peter Sprague has been on a strong creative streak, with the relatively recent release of his fine collaboration with vocalist/ percussionist Leonard Patton Dream Walking (2016) and the 2017 issue of his collaboration with singer Rebecca Jade, the superlative Planet Cole Porter. The respective releases reveal again Sprague’s particular joy in collaborating with skilled vocalists on a set of well crafted tunes, whether from the Great American Songbook or songs more contemporary. He never loses track of the melody or the vocal line; even in Sprague’s furthest reaching improvisations, you sense a player who’s responding to a fuller concept of the material.

So now we have his newest album, Lucy in the Sky, an album of Sprague, performing on solo guitar, a varied set of songs–from “My Favorite Things,” “Oh Shenandoah,” “Trieste,” and several Lennon-McCartney compositions–with a marvelously delicate touch. There is a discipline here that emphasizes the euphony over cacophony. Sprague is skilled both in finger picking and in using the pick, and varies his approach with a compositional sense of dynamics. He does a remarkable job disassembling the familiar melody of the title track and reconfiguring the tune into something wholly fresh. The melody morphs slowly, gorgeously, and his fleet embellishments contrast well against his unique voices of the songs’ dreamy themes.

Not that this album is solely meditative or prone to tone poems. The record, in fact, swings and sways quite a bit, a major amount of commotion for one musician to generate. “My Favorite Things” comes into consciousness as the album opens with punchy rhythms and brooding guitar figures, subtly coming to the main theme and seamlessly giving way to some wickedly sprite 16th-note flurries, brief and enticing, a subtle rise in the song’s sense of anticipation. “Etude Z,” a Sprague original, is a choice romp, a swing progression with a firmly implied walking bass highlighting the guitarist’s mastery of sliding between full, diminished, and half chords and adding elegant and elaborations on joyous blues. In the same vein, the last track, the Beatles’ “Can’t Buy Me Love,” gets an arrangement that hints at Sprague’s abiding interest in many guitar styles that inform his playing: a strong strain of bop, a sexy taste of bossa nova, a bit of the blues. And, to say again, Sprague does not lose the sense of the human voice in his impressive demonstrations of technique, lyric and mindful or accelerated and quick witted. Peter Sprague is a modern master, in my view. Lucy in the Sky is an excellent addition to his already impressive body of recorded work.