August 2022
Vol. 21, No. 11
Pat Metheney at the Rady Shell by Robert BushDecember, 2021
Tiki Oasis Celebrates 20 Years of Exotica Mayhem and Fun  by Andy RasmussenDecember, 2021
The Lady Doctors Will See You Now by Laura PrebleDecember, 2021
Happy Birthday, Jeannie! Jeannie Cheatham Celebrates her 95th Birthday this Month by Jim TrageserDecember, 2021
Zach Caplinger: A Gifted Musician in his Own Right by Dwight WordenDecember, 2021
The Return of IPO San Diego: After a Five-Year Local Hiatus, David Bash’s Unique Music Festival Makes a Much-Anticipated Return by Scott SamuelsDecember, 2021
This Saw Is Not a Tool by Derek ShawDecember, 2021
Our Redneck Poet, Merle Haggard by Mark PulliamDecember, 2021
Linda Hoover: I Mean to Shine by Jon KanisDecember, 2021
Tom Griesgraber: Now a Member of the California Guitar Trio by Paul HomiczDecember, 2021
Advertisements 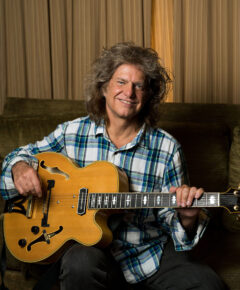 I was lucky enough to witness Pat Metheny’s first national tour as a leader some 43 years ago when I was 19 years old. Since that evening, it is much easier for me to account for the few gigs he’s played in San Diego that I have missed (about three by my reckoning.) That first show turned me around, and I became a lifelong fan. Since that night in 1978 at the relatively tiny Backdoor (a student “nightclub” at San Diego State University,) I’ve seen him all over Southern California, including riveting dates at the California Theater, the Fox Theater, the Orange County Performing Arts Center, and Symphony Hall.
Even in his nascent days as a leader, Metheny insisted on exercising as much control over his production values as possible. Dismayed over the quality of available acoustic pianos, he purchased a Steinway to take on the road and he always brought his own sound and mixing board engineer in order to maintain that control. The Pat Metheny Group aesthetic was also drastically different from almost everything else in jazz at the time. They played loud, dressed casually, and you’d never see a music stand anywhere on the stage. The concerts were always events. He made sure people got their money’s worth without ever pandering or lowering his exacting standards.
They used to say that James Brown was the hardest-working-man-in-show-business, but Metheny could definitely make a similar claim. In the days of the Pat Metheny Group he thought nothing of touring the world for most of a given year, then returning to the U.S. (he didn’t really have a home at the time—just a warehouse in Boston where he kept his clothes and other possessions); at that point, where his bandmates would work on getting some well-deserved rest, Pat would start a new project and go back on the road. 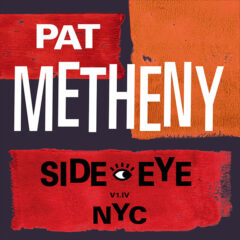 In that spirit, Pat’s latest venture is a project he calls Side Eye, which aims to partner him with a revolving cast of much younger players and take them on the road to showcase their prodigious abilities with his sizable and loyal fan base. Metheny’s relentless performing schedule ground to a halt in the last two years due to Covid, so this tour was long overdue in the eyes of this workaholic musician. The current version of Side Eye features multi-keyboard wizard James Francies and drum dynamo Joe Dyson, both still in their mid-twenties.
This was my first show at the San Diego Symphony’s brand-new Rady Shell, an 85-million dollar outdoor venue located right on the water. I’ve heard a lot of great things about the sound—but to be honest, I came armed with a great deal of skepticism. The sound at outdoor events is usually horrible. I am beyond elated to report that my doubts were unfounded. The sound was miraculous and I can’t wait to return.
Metheny began the show with a series of duets with his new musical partners. First up was a pairing with Dyson on the Ornette Coleman classic blues “Turnaround.” Metheny played like a man obsessed with making up for lost time—already in peak form as he stretched the loose theme into a gumbo heavy on tension and light on release. Dyson hung tough and acquitted himself well.
Francies was next as the two tackled a Metheny staple from the album Letter From Home, “Have You Heard.” This represented a fascinating test: could these guys pull off a tune everyone knows from the sextet version with just guitar and keyboards? Somehow, the answer was yes. Francies played as if he had at least three hands and throughout the night, the absence of a bass player never became an issue.
The next few tunes featured the full trio, beginning with an ebullient romp through “Bright Size Life,” from Metheny’s first album as a leader, released on ECM in 1975. Without a pause the band shifted into another selection from Letter From Home, “Better Days Ahead,” again sounding like a much larger ensemble. Francies nearly stole the show on the bluesy Michael Brecker tune “Timeline,” with an astonishing organ solo. 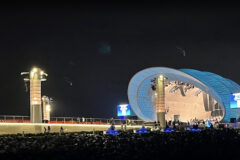 Metheny loves to showcase his assortment of odd, custom-built instruments, and this night was no exception. At one point, he brandished a fretless guitar and proceeded to challenge the audience’s tolerance for dissonance with a wild extrapolation (I think) of the title tune from his 1982 session Offramp. Then his new bandmates left the stage and Pat’s guitar tech brought out his 42-string “Pikasso” guitar, for a pensive version of “Into The Dream,” from the 1997 album  Imaginary Day.
As beautifully as his playing with the new group had been all night, there is something truly magical that happens when Metheny grabs a chair and plays an acoustic guitar by himself. He began his solo medley with just a hint of “Phase Dance,” (a tune he used to open every show with for years,) following that with “Minuano,” then “This Is Not America,” and ending with another crowd pleaser, “Last Train Home.”
At that point, it seemed that the concert was over, but the audience delivered a thunderous ovation for more than five minutes—finally exploding when the full trio returned and absolutely knocked another Metheny anthem “Are You Going With Me?” out of the park.
It was the perfect way end a perfect night. Pat didn’t hold anything back, and his guitar synth solo, drenched in emotion, made this observer fully aware that joy is a possibility through music. Being reminded of that is always priceless.

A Life In Music: A Conversation with Andy Cahan