September 2022
Vol. 21, No. 12
A Life In Music: A Conversation with Andy Cahan by Bart MendozaDecember, 2021
Songbirds Take Flight by Charlene PulsonettiDecember, 2021
Performers and Artists Contribute to the Audubon Society’s Birdsong Project by Paul HomiczDecember, 2021
Finding the Balance Between Science and Music: An Interview with Dr. Hima Joshi by Catherine BarnesDecember, 2021
Jazz 88's Joe Kocherhans Bids Farewell to a Long and Illustrious Career by Wayne RikerDecember, 2021
The Lady Doctors Will See You Now by Laura PrebleDecember, 2021
Tiki Oasis Celebrates 20 Years of Exotica Mayhem and Fun  by Andy RasmussenDecember, 2021
Happy Birthday, Jeannie! Jeannie Cheatham Celebrates her 95th Birthday this Month by Jim TrageserDecember, 2021
Zach Caplinger: A Gifted Musician in his Own Right by Dwight WordenDecember, 2021
The Return of IPO San Diego: After a Five-Year Local Hiatus, David Bash’s Unique Music Festival Makes a Much-Anticipated Return by Scott SamuelsDecember, 2021
Advertisements 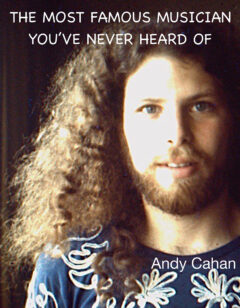 Andy Cahan may not be a household name, but his accomplishments in music are significant. Since 1961 he’s devoted his life to making music and while he himself never graced the charts, he’s crossed paths with many who have. In his new book, The Most Famous Musician You’ve Never Heard Of, Cahan gathers up six decades of his life in music, making for an entertaining read, with plenty of eye candy for fans. Chatting with Cahan it’s easy to see how he became friends with so many. He’s a great storyteller—affable, with a contagious joy for music. A true raconteur, one story leads to another.
What was the impetus for the book? “I had nothing else going on,” joked Cahan. In truth, he felt it was time to assess his life’s work. “I said to myself this could be my final hurrah,” he remarked. “It could be a really good calling card; it could also be a really good legacy. I wanted to put something on planet earth that was memorable, that had some meaning and was a lot of fun, a coffee table picture book, which is what it is. Every page is a different story.” 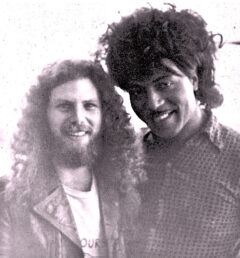 In a life full of highlights, starting with being a longtime band member and associate of the Turtles / Flo & Eddie, it’s hard for Cahan to pick just one, but he narrows it down to March 2, 1974: The 16th Annual Grammy Awards. “Being the music director for the Grammys, with Little Richard and Chuck Berry— that was incredibly amazing!” he said. It speaks volumes that Cahan played piano during the TV spot, with Little Richard singing stage front. “Our rehearsal was backstage at the venue,” he recalled. “There was an upright piano, and it was just the three of us in this tiny room rehearsing all their hit songs. I was in heaven. I mean, I couldn’t believe it, because the Beatles were the people who got me into music and they idolized Little Richard and Chuck Berry. So, here I was full circle, working with the Beatles’ idols. It was very exciting for me.”
Andy Cahan at the 1974 Grammys: www.youtube.com/watch?v=IjUMlhKXX3Q 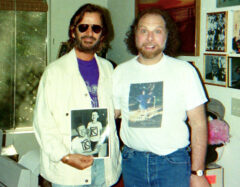 Cahan also cites a moment with Harry Nilsson and Ringo Starr. “When I met Harry Nilsson on a radio show I did, we became really, really close friends, like high school buddies,” he said. “He was my buddy and we’d hang out all the time, driving around playing his songs loud and singing along at the top of our lungs. One great memory was him bringing Ringo over to my living room studio and recording some children’s stories.” A great afternoon was about to get even better. “When we finished that up we went over to Ringo’s house,” Cahan said. “We were in his living room and I asked Ringo if I could play one of his guitars; there two guitars sitting by the couch, a red one and a blue one. I remember they had little stars in the inlay on the fretboard. So, I picked up the guitar and started strumming, just some chords and then Harry started to sing. “I listen for your footsteps…” And then Ringo joins in, so here I am playing “Don’t Pass Me By,” with Ringo Starr and Harry Nilsson. Holy Moly!”
Might there be a sequel to this book? “There are stories that weren’t included,” Cahan confirmed. “But some of them were more personal, intimate relationship stuff. My editor, Jeff Tamarkin suggested, correctly, that the book isn’t about that, it’s about music.” He jokingly considers that he’s more likely to pen a second tome than expand the content on this one. “I can always add to it, but the most difficult part is the index,” he said. “I have over 1500 names in my index. If on page 22 I decide to insert another story then everything has to be changed on the index and that is a lot of work.” 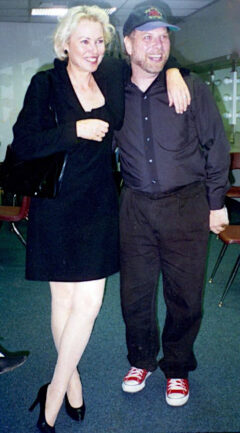 While there is more material for a book, he notes much of his recording archives have been mined. “Much of what I had that wasn’t already out there was released on two different albums by Munster Records in Spain, my early (1965-1968) recordings, as Johnny Farfisa (with bands the Individuals, Euphorian Highway) and later stuff with Geronimo Black (1969). Munster did an amazing job with the packaging on both of them, with full color inserts, the works.”
Johnny Farfisa – The Sky is Falling. The Best of Johnny Farfisa Ad (2017) www.youtube.com/watch?v=vuUMQhcBUBU
Geronimo Black – Freak Out Phantasia Ad (2019)
www.youtube.com/watch?v=wVEPxO7pOL8
Compiling The Most Famous Musician You’ve Never Heard Of, how did it feel for him to look back? “I feel very happy about it,” Cahan said good naturedly. “I’m amazed that it happened! The only bummer is that I’m not wealthy,” he laughed. “You would think that after all the (things) that went down, I did well, but it’s an up-and-down world. My life has been an up-and-down journey and the pandemic has not helped, but in the grand scheme of things it’s been worth it.” Cahan is still working, playing venues in his area and is available for recording, as well as touring.
“There were times when I had thousands of dollars and I was doing well and then there were times I was sleeping in my car,” he said. “I don’t really regret much. There were a couple of times when I had gigantic opportunities to do things, but I screwed it up, so I do regret those moments. But other than that? I’ve had quite an amazing career.”
Andy Cahan: https://allentertainment.net/index.html

Review: The Most Famous Musician You’ve Never Heard Of by Andy Cahan
Odds are you haven’t heard of Andy Cahan, who was born 1947. But the odds are you have heard some of the music he’s been involved in over the past five decades. Cahan has had the kind of career that just isn’t possible anymore, a vital thread in numerous musical careers, taking in a mix of great times, hard work, and the occasional historic occasion for a musical resume that’s hard to beat. Cahan is someone whose life is, essentially, music. 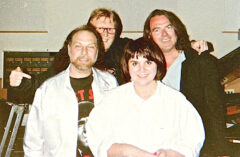 The Most Famous Musician You’ve Never Heard Of tells his life story through a series of anecdotes that takes him from a monster-loving kid in the 1950s through to his current piano bar gigs. Everything in between has the makings of not a biopic, but rather a mini-series, featuring as it does adventures with Harry Nilsson, Dr. John, Billy Bob Thornton, Ringo Starr, and many more. It’s 332 pages well worth reading.
While personal fame eluded Cahan, he’s made many friends along the way, rubbing elbows, touring with and recording with the greats. Cahan has worn many musical hats on his journey. He’s perhaps best known as a latter-day member of the Turtles, and he can also be heard playing piano on albums by the likes of The Monkees (Pool It), Flo & Eddie (Rock Steady), and The Honeys (Ecstasy), amongst many others. Additionally, he’s been an archivist, the man behind reissues by The Leaves as well as the Zappa-related Grandmothers albums. Cahan also spent time as an in-demand demo doctor and producer / engineer. And then there are his stints as a filmmaker and actor. Details on all the above are included. 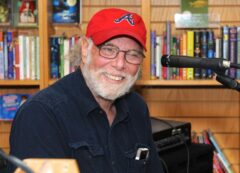 Just as important and luckily for us, Cahan is also a bit of a pack rat. Music fans are all the richer for it. The Most Famous Musician You’ve Never Heard Of is a biography to be sure, but it also comes across as Cahan’s personal scrapbook, full of the sort of ephemera that will thrill die-hards and historians alike. Contracts, receipts, flyers, candid photos, tape boxes, set lists, and more fill the pages—there’s even a backstage pass for a show at Humphreys. Back to the pictures for a second. There are many wonderful snapshots of gatherings and concerts, but even better are the fly-on-the-wall photos—of Nilsson recording, Grace Slick backstage, and The Turtles in all manner of adventures. Plenty of cameos as well from Seals and Croft, Stephen Stills, Eric Carmen, Little Richard, and more. Cahan truly was in the thick of things.
It’s fascinating to see his growth as a musician, going from a high school garage rocker to studio recordings, but it’s all laid out here along a natural timeline.
What comes through the clearest when reading this book is how much fun Cahan is having. Sure, not everything comes up roses each time, but even then there’s a sense that the trip has been more than worth it. Personally, as a music historian, in addition to the main story it tells, all the detail included is a joy to sift through and fills in the blanks in a lot of other stories. Indeed, specifically as a Nilsson aficionado, it’s nice to read the specifics of such things as his rare appearance at Beatlesfest 1992 in Los Angeles. I was there, and reading Cahan’s account is a time machine back to a special event, pinning down how such an incredible performance happened, and confirming what Nilsson sang in the process.
A casual fan will certainly enjoy this book, but the die-hard music lover in your life will find it to be an essential read. Cahan sees music as its own reward; his enthusiasm and spirit in the book is contagious. He continues to perform, but Cahan’s place in music history has long been secure. The Most Famous Musician You’ve Never Heard Of? This book is a great step in changing that fact.

Pat Metheney at the Rady Shell