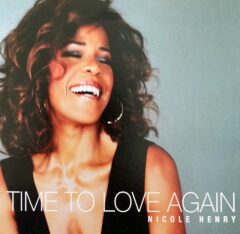 Nicole Henry is a rare talent. She deftly combines jazz, pop sensibilities, and soul, all with an informed sense of the traditions of Broadway and the Great American Songbook.
The eastern Pennsylvania native has established herself as one of the leaders among the young singers now interpreting standards and classic tunes, performing thousands of concerts all over the world. She has recorded several CDs of classics, with her latest, Time to Love Again, proving that the younger generation is hip, talented, and paying attention when they listen to their grandparents’ record collections.
Henry chose well—a number of older songs that are often overlooked. Anthony Newley’s “Feeling Good” was in the repertoire of many a singer in the sixties, but since that decade of paisley and patchouli, it’s just not covered much anymore. Henry opens the disk with a lively and exuberant take on this gem.
With her idiosyncratic vocal approach, Maria Muldaur almost sealed the mid-seventies pop hit “Midnight at the Oasis” as hers and hers alone, yet Henry is able to put a more soulful stamp on this 1970s chart topper. The same can be said of Henry’s work on Sade’s “Is It a Crime?”
Does anybody remember Buffy Saint-Marie? The singer/songwriter had a successful career that was turned meteoric by the blacklisting she received from the White House. If it hadn’t been for the malfeasance of Lyndon Johnson, Richard Nixon, J. Edgar Hoover, and others, we may have been treated to more great tunes like Sainte-Marie’s “Until It’s Time for You to Go.” Henry gives the ballad a light, less pensive interpretation that lends some joy to the song.
The musicians chosen for this project are all top-notch. I’d like to single out—for particular praise— the fresh and inventive work of pianist Pete Wallace. The quality of the recording, which was done at Pen to Platinum Studios in Miami, Florida, is quite good.
This is one of those recordings in which all the parts come together, terrific arrangements of well-chosen songs sung by a strong and beguiling performer. Time to Love Again is one of the best new CDs I’ve heard in 2021.