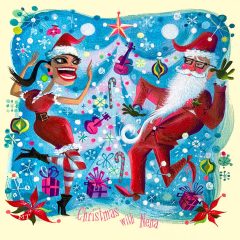 One of the most fascinating things about Nena Anderson’s musical journey is her creative unpredictability. Sure, she has blues roots and rock riffs, and the woman excels in the Americana/country genre… but a Christmas album? She smiles when she says, “It’s a jazz record, a vocal jazz record, something I haven’t done in years. But I’m really excited by it.” Nena called on guitarist Adrian Demain, bassist Rob Thorsen, and drummer Duncan Moore for this holiday recording and says it’s “a throwback to a simple jazz combo with an Ella Fitzgerald, Julie London” feel.

Co-produced with husband Deane Cote, tracks for Christmas with Nena were created at Pacific Beat Recording in Pacific Beach with Alan Sanderson. Nena says, “I’ve worked with him before and I love his studio and his sensibilities.”

The EP includes three original songs and two covers. “One of the songs Deane wrote.” Nena says, “is called ‘Christmastime Again.’ Originally, he wrote it and it sounded a little Beatle-esque, almost pop like. We messed with it and made it a cool, standard type of song. It was a lot of work, but really fun and it came out great!

My drummer from another band, Tim Petersen, also contributed a track. I immediately loved the song. It was three-quarters of the way finished and we tweaked it a little bit. It’s called ‘Kris Kringle Wants to Mingle.’” [laughing] “It sounds like innuendo, but it’s actually a very sweet, family-friendly song.”

The third original comes from “a song I wrote a few years back when visiting my folks called ‘Christmas in Mexico.’ I like it because it’s got that old-fashioned rumba feel to it. It’s pretty and wistful.”

Two covers fill out the EP: ‘What Are You Doing New Years?’ and another Holiday favorite that has special significance for Nena, ‘Have Yourself a Merry Little Christmas.’ “It’s a song I’ve done on live shows and one that I’ve always loved. It’s special because Hugh Martin wrote it and he lived in the North County area.”

When pressed on the inspiration and motivation behind the record, Nena says simply, “I’ve always wanted to do a record with Adrian that sounded like this. He and I have worked together for so long and I’m such a fan of his… and Rob and Duncan are fantastic. It’s the first time I’ve worked with Duncan, but his reputation precedes him. I just loved the interaction and how everyone pushes each other a little bit. We had such a good time.” The recording reflects that holiday spirit.

Chrismas with Nena is a must-have for anyone’s stocking this season. Nena suggests, “It’s the kind of record where you can be home on a cold night, put it on, and it’s just pure fun.”
Merry Christmas!

MARK ALAN LOVEWELL: With the Fishes