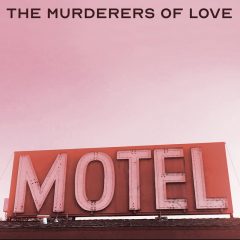 The Murderers of Love are built around founder Jaime Muehlhausen, whose San Diego roots date back to the nineties, to days as a coffee shop artist and spots in bands that included the Deadlites. After some time away from music as a graphic designer, the singer/songwriter got back into the music scene in 2017 with a self-titled album, The Murderers of Love. His latest project is Motel, a new five-track EP recorded with a group of musicians that include Muelhausen’s vocals and acoustic guitar, drums by Steve DiStanislao, and producer Alan Deremo’s bass, acoustic and electric guitars, keyboards, electric sitar, and vocals. Others helping out include Steve Wood on accordion and Scott Monahan’s keyboards.

This set comes with a back story; all of the songs are based on a book of short stories by guitar designer Creston Lea (Wild Punch). Muehlausen has written a companion booklet for the disc that includes all of the lyrics and one of the stories as well as the often bleak but cohesive themes that are familiar: people, places, and departed lovers encountered on the road, who come and go on buses, live in motels, and hang out in bars. Muelhausen’s songs may tread on the same turf as John Mellencamp, but they have a softer, folkish vibe and his earnest voice clicks.

“Odessa Left Town” uses minor chords to chronicle the departure of a longtime lover from the flatlands to the West Coast, deserting the singer and everyone else—and they are sure that she won’t be free in her new life. The dreary subtext continues in the title tune with a keyboard-driven soft rock beat Muelhausen relates his outlook through the eyes of a longtime resident of a rural motel, lonely on Christmas with no one to celebrate with. “And it’s just like last year/ And its just like next year/ And it’s all the same in between/ Oh I-Yeah-I don’t know what I believe.”

“My Love Rose” is barely a minute and half but is a wonderfully realized folk statement about a departed lover, catchy and personal, with a wistful edge. The closest thing to a conventional rocker is “Western Pennsylvania” and again the tale is about a motel, a Greyhound, and a woman who has hit the road, “Out in Western Pennsylvania,/ The air was warm and she was a sight/ Well the motel looked like 25 bucks and a broken neon light.” This one has an ace arrangement with organ riffs, a slide guitar solo, and female backing vocals adding sass. The set closes with “Fearless Warriors,” with Muelhausen softly singing about spending a July 4 after another breakup, “If anyone thinks they’re lonelier than me they’re lying.” The tune rings true, as his regular bar is no longer a welcome hangout and the fireworks in the sky do nothing for him. The somber themes of Motel, expressed though the understated melodies and well-crafted lyrics of the Murderers of Love, accomplish a solid emotional connection.