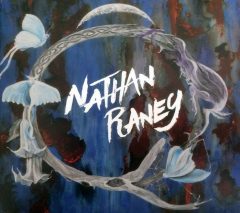 Nathan Raney’s musical bloodlines run deep; he started on drums in grade school, then bass, and started guitar and writing in high school. The guitar DNA comes from dad Jerry, who has played with Glory, the Beat Farmers, and now heads up the Farmers–and frequently adds Nathan during live sets for some lightning-fingered guitar spots. For his debut, self-titled album, Nathan enlists some family backing (from dad and keyboard-playing brother Kyle), but this is Nathan’s show, and a departure from the high-octane updates on Bo Diddley and the Yardbirds. His is an unusual musical excursion with darker moods that range from quiet acoustic ripples to power-funk assaults that draw from prog rock and even fusion sources. He uses this palette to delve into deeply emotional, soul-searching lyrics that are intended for the thinking listener, examining the big-picture concepts like existence and other questions we ask ourselves in the dark silences.

Nathan wrote the nine songs, plays guitars, bass, and drums, and is the lead vocalist. His deep vocals are a pleasant surprise-he has a booming, resounding presence that fills the middle ground of the layered sound, and in many songs creates a built-up feeling of anthem-like scale.

“Ashes” is the heaviest of the electric offerings, hard-pounding guitar crashes away as he sings of “Lust to Lust/ Born in flames/ Return to dust.” The careening, quicksilver guitar break has echoes of Allan Holdsworth. If Nathan has other influences, they might be fusion players like fusion bassist Tony Levin or even late ’70s prog-rock band UK, which is echoed on “Avarice.” This highlight is almost a suite of guitar/bass hooks and sound ideas that wash against one another, when vocals emerging on grooves to make statements about humanity’s tendency to be its own worst enemy, due to greed. “Dead Sea” turns inward, again keeping the listener involved with complex guitar figures as Nathan sings of a personal trial. Once more, the song has movements like a prog piece, as Nathan lays his soul bare, “Nothing moves on the Dead Sea/ These doldrums are my grave.”

Jerry trades off lead vocal lines with Nathan on the slow, introspective “Inquisition,” which also features nice organ support from Kyle. It is another very effective look inside, and by this point it is clear that Nathan’s subject matter is going to be consistently dark and the mood somber. One of his early compositions, “Remembrance,” is next, an uplifting instrumental well-placed in the program, and featuring a slashing solo by dad.

Another standout track, “Softness in Her Eyes,” is a mellow and touching document celebrating a moment of love. With help from Kyle’s piano, Nathan sings “We let love grow/Blossom into something full…opening petal by petal.” While “Apathy” seems like another visit to the same well as “Avarice,” the disc wraps with “Lucid,” and it rocks hardest of any song on the album. It’s about dreams and nightmares, with overdriven guitar riffs that give way to softer moments–only to start stomping again.

CD release will be on March 9 at Navajo Live. See next month’s calendar for details.

ROBERT WARREN: From There to Here