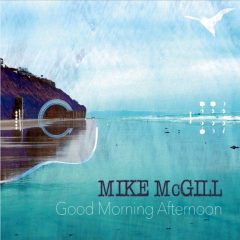 Good Morning Afternoon is the latest album from Mike McGill, a North County singer/songwriter who describes his music as “a little surf/ meets folk/meets rockmeets pop.” McGill wears his debt to the laid-back surf/beach soft rock music of Jack Johnson and Donavon Frankenreiter on his sleeve, and these influences aren’t a bad place to mine ideas from. Like Jason Mraz, McGill is an East Coast transplant who moved to San Diego and found musical opportunities; he covers a lot of musical ground on the album, achieving the feel of an eclectic crusader for causes like our society’s ills and environmental concerns on many tracks. It all holds together because McGill is backed by some of the best local musicians around, including guitarists Marc Intravaia and Ron Bolton, Rick Nash on bass, and drummers Bob Sale and Duncan Moore. Marti Amado plays keys and her production adds a glossy finish.

“Whisper” opens, a smart pop rocker that sounds like a Mraz outtake, and announces to the listener that this plugged-in disc will probably not be as laid back as they might expect-there are drums on all but one of the 12 tracks. “The Dream” drives this home, a rockabilly rumble about an imaginary road trip to Nashville with Elvis–and rendered in a mock-Big E vocal; it doesn’t miss too many tricks. Next up, “The Pledge,” is a rousing rallying cry about improving ourselves as humans, “a celebration of rebirth… to be non-violent, respect my body and the Earth.” Vigorously delivered with a full horn section, there is no arguing with the message.

McGill covers much of the same turf of “Pledge” on the following track, “When We Were Young,” this time with a reggae guitar hook, and a more introspective soapbox, but with the same horns and vibe. He changes things up on “My Boy,” softly rendered on acoustic guitar with violin accents-singing to a son about the perplexities of life, including maintaining sobriety, and offering support from afar; it is a remarkably touching disc highlight.

After “The One You Love” heads back to the beach (with marimba), one of the catchiest riffs on the album is heard on “The Middle of the Night.” A spare arrangement clicks as McGill sings about missing his lover. “For the Teachers” has an elaborate arrangement as full horns join seriously hot Bolton guitar leads, while the lyrics praise who those toil educating children. This time, the song and its message are mismatched, but a fun listen anyway. McGill’s comfort doing mild protest/improvement tunes continues on “Better World,” as he takes on most of society’s problems in a mid-tempo rocker: “Time will move forward, the clock’s ticking on/ Our kids need something they can depend upon.” McGill’s use of ace sidemen pays off throughout-Intravaia’s guitar breaks on this track and on the harder-rocking, title track/closer kick both songs up a notch.

Mike McGill’s Good Morning Afternoon is beach rock taken a step further, given social messages and some rock edge; adding up to a good listen.