January 2023
Vol. 22, No. 4
Nathan Raney: A Beat Farmer’s Son Sows His Own Seeds by Raul SandelinFebruary 2018
Back with a Bang! Java Joe's Reunion at San Diego Folk Heritage by J.T. MoringFebruary 2018
Book Review: The Philosophy of Modern Song by Bob Dylan by Ted BurkeFebruary 2018
Rick Nash: Bass Man in Demand by Wayne RikerFebruary 2018
Mod Revivalists the Trebels to Reunite for 40th Anniversary Show by Jim TrageserFebruary 2018
If Music Be the Food of Love, Play On: Dually Noted Pairs Fine Food and Fine Music by Paul HomiczFebruary 2018
Harold in the Land of Jazz by Bart MendozaFebruary 2018
Sephardic Dance and Music by Yale StromFebruary 2018
Loretta Lynn: A Special Tribute to the Queen of Honky Tonk by Terry Paul RolandFebruary 2018
Ben Grace Gilmore: It's All About Building Community by Sandé LollisFebruary 2018
Advertisements 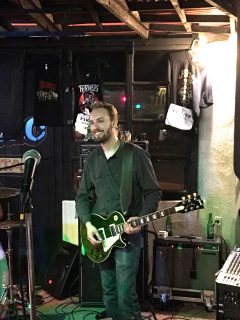 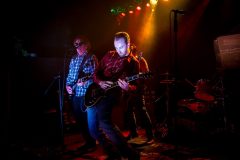 I see nothing on the Horizon
I see nothing from where I came
I have nothing but the planks I lie on
While my minds floating away
–Nathan Raney, “Dead Sea”

Nathan Raney’s new self-titled album opens with the notes of a lonely guitar, an acoustic steel string with plenty of live timbre and string buzz to fill the gaps in the room. I’m expecting to hear Neil Young: “…I’ve been first and last. Look at how the time goes past…” But no other voices join in.

“‘Beginnings’ was the last song I wrote,” explains Nathan. “I’d been listening to the Swedish band Opeth’s Damnation album. Technically, it’s dark and melodic. I used a double drop-D slide tuning. I’ve written ‘The End,’ the second half of the song that’ll appear at the end of the next album. The dark melody sets the tone for this album and ‘The End’ will hold the two albums together.” The guitar finally stops unceremoniously.

Ashes
“But don’t let the acoustic intro fool ya! The just-released Nathan Raney CD is a rollercoaster ride,” says DJ Michael Halloran. The second song is the album’s single. And it’s where the album truly begins after the instrumental prelude.

“It started out two times as fast,” says Nathan. “I finally found a heavy, Alice in Chains tempo. But it’s got a sexy hook and still is an all-out rock song.”

“Ashes” begins to discuss the story that got Nathan Raney to where he is today, a story that he explores throughout the album from various angles. The song is about temptation, the tempting of the eyes without the heart. Musically, Nathan, who performs virtually every instrumental and vocal track on the album, shows that he can rock on drums, bass, guitars, and lead vocals. (Dad/Beat Farmer Jerry Raney provides occasional backing vocals.) “Ashes” has a live band feel that Nathan captured by recording each track straight through. None of the parts are punched in. On the stage stands a five-piece band of one.
“He’s versatile. He can be the Farmers’ guitar player and then switch gears and be a songwriter or metal lead guitarist and it’s all authentic and pro all the way!” says Jeff Berkley.

Avarice
“I owed a lot of money on a car that didn’t run.” Nathan gives the reasons behind this album and the emotional landscape that he set out to explore. “And car dealers are greedy. The song’s about avarice, the worst kind of greed.” The song centers on a single guitar lick. “I wanted a full band rocking on a single riff. It’s a strong melodic hook. I need to be conscious of the audience so they can follow along.” Again showing his millennial musical inclinations, he cites Mars Volta. The song is musically very technical. Part rock, part jazz.

“It sounds like a drummer has written complex arrangements, then asked his guitar player to complement these with equally intriguing guitar parts,” says Michael Halloran. “The only issue is Nathan himself plays all of these parts, save a few guest appearances from his father Jerry and brother Kyle Raney.” Known as a guitar shredder, Nathan uses “Avarice” as a showcase for his fiery soloing.

“Dead Sea” could be considered the second single of the album. It begins with another catchy guitar hook not unlike many Talking Heads live jams. “This was the first song written for the album, says Nathan. (“I wrote the instrumental ‘Remembrance’ when I was in high school.”) The song goes from slow to fast, fast to slow, taking the listener on the rollercoaster promised earlier.

Turning 30 can be a shocker. And, for Nathan, it took him to a dark place. Besides the $8000 lemon parked in his yard, other things were piling up such as a recent breakup. So Nathan found himself broke and depressed and worrying if he was going to get out.

Through the ebb and tide of rock-jazz fusion, Nathan gives homage to the prog metal band Baroness. “‘Dead Sea’ was natural for me to sing and I sang it in the mindset I had been in. I could feel the emotions again when I sang the song in the studio. It was also me starting to change who I wanted to be.

“‘Inquisition’ was about me really questioning myself, how was I going to get out of that period in my life,” Nathan says. “I had a hard time singing this one so dad sings verses and I sing the chorus.”

For anyone who hasn’t caught on, Nathan is the son of Jerry Raney, arguably the elder statesman of San Diego’s rock scene. Since the 1960s, Jerry has played in Thee Dark Ages, Glory, the Shames, and, most famously, the Beat Famers, the pioneering 1980s cowpunk band from El Cajon. Since a young age, Nathan has been sitting in at his dad’s shows. The reformed Farmers have been playing and recording regularly for about 10 years and Nathan has been a big part of this continued legacy.

“When Nathan invited me to the studio to hear what he was recording,” says Jerry, “I was surprised to see he’d written a bunch of new songs that I hadn’t heard before. He kept inviting me to come in as the album progressed. I offered suggestions and another pair of ears. I helped a little on the vocals and harmonies and played a solo. But this was his thing! He’s made my wife, Merrilee, and me proud! Oh yeah, he’ll be on the new Farmers album too!”

Remembrance
The second instrumental on the album, this is the song Nathan wrote 15 years before in high school and the first song he wrote to completion. It was his first statement as a “songwriter,” a term Nathan now prefers to describe himself.

“I always felt good about this song and wanted to record it. It tells a beautiful, melodic story the way it builds logically from beginning to middle and end. It’s the first song I played live on a guitar and it’s about beginnings, about flirting with the beginning of something.”

“The biggest clue about the depth of this album is ‘Remembrance,” says Michael Halloran. “This could have been a song on Led Zeppelin III, or an album by The Smashing Pumpkins, or even an Eric Clapton hidden track.”

“Nathan comes from a musical family,” continues Halloran. “When I first met him years ago, he was a teen-aged world-class drummer. He was into giving lessons to anyone who needed them. Now, he’s matured into a musician and songwriter despite his young age.”

It’s true. Nathan started as a drummer, getting his first drum set at the age of five. But the guitar soon followed and Nathan has gone from behind the kit to frontman to every instrument in between. He’s probably most noted locally as the guitarist for the hard rock band Manifold. But not to be limited, Nathan adds, “I’m a musician not a drummer or guitarist. Again, I’m a songwriter.”

Softness in her Eyes
This is the love song on the album. “But it wasn’t a love song originally. I had some versions of the chorus already written.” Then Nathan met his current girlfriend and suddenly had a reason to write a love song. The song features both Nathan’s prowess on rhythm and lead guitar. The chords of the slow song slide legato-style across the fingerboard while the solo climbs virtuously into the upper registers. All the while open chords drone in the background.

“Apathy” is an ode to classic rock, the music that Nathan undoubtedly heard a lot of, growing up in the Raney household. “My dad said it sounds like Spirit. It’s a fun classic-sounding song you can rock on.” Nathan has been extremely conscious to balance more accessible, toe-tapping rock ‘n’ rock with prog rock winks to the musicians listening. This is one song that contains an archetypal song sampling that most students of the 1960s-’70s will recognize. It’s another powerful, “live” song in which Nathan is reminded that the giant cycle he once couldn’t get out of would be difficult to escape.

“Lucid” goes for another spot on the radio dial: ’80s college and alternative. “I wanted a haunting feel like Oingo Boingo. I’ve struggled with insomnia my entire life, up all night thinking of things.” In a call-and-response that might be symbolic of his struggle with the dark side, Nathan plays two dueling guitars during the solo. With both power and pop sensibilities it’s, as Nathan says, “a strong song to end on.”

As noted, Nathan brings a special maturity, a rock ‘n’ roll wisdom to his playing. In many ways, he follows perfectly from his father’s musical teachings. In other ways, he’s definitely set himself apart, not just updating his songs with more millennial sensibilities, but by the number of genres he’s willing to explore. Picking apart the song-particles of Nathan Raney, the self-titled album, we hear acoustic folk, prog, blues–and country-rock, jam band, ’80s goth, fusion, and an expanded vocabulary of the archetypal rock riffs that still echo in every Boomer’s head. Neil Young. Queen. The Smiths. Zeppelin. Al Di Meola. Depeche Mode. The Allman Brothers. Tool. King Crimson. The Cure. Talking Heads. Oingo Boingo. It’s all there!

The album is dedicated to Family. Besides dad Jerry, Nathan’s brother Kyle plays keyboards on the album. Longtime friend Paul McClendon of Audio Champs Studios in Spring Valley recorded and produced the album. And a number of members of the extended Beat Farmers family helped out in various ways.

Now, Nathan is revving up to record his second album at Audio Champ Studios and is currently writing new songs. “We’ve agreed to meet back in the studio in February,” says Paul McClendon.

Nathan’s also putting a new band together to play the songs off the two albums plus some of Manifold’s more radio-friendly cuts. Tim Pyles has already played “Ashes” and “Avarice” on 91X. So there’s a local buzz starting. And it’s time to showcase the tunes around town. But a band is needed to recreate live what Nathan did in the studio by himself. “Since they’ll all be my songs, it’ll be more like the Nathan Raney Project. I even want to explore my dad’s old songs like Glory’s ‘High School Letter.’”

Here’s a video clip of “Ashes.”