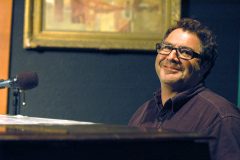 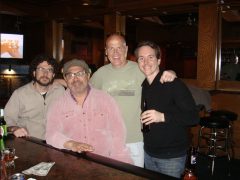 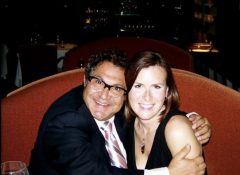 Johnny and his wife, Dawn.

On Friday, January 19, Johnny Ciccolella woke up for the last time. That morning he suffered a stroke that was catastrophic. Very suddenly, I was among a swelling group of family, friends, and acquaintances who were trying to absorb the news, still looking for hope that he would survive. I dared to think that I’d have another amazing story to tell about the time Johnny had a stroke and survived. Johnny was truly larger than life and those who knew him well remember that he was one of the luckiest devils in the history of the world. He was a man who had good fortune in permanent residence on his shoulder. Alas, all hope faded once the medical assessments were complete and Johnny’s family and friends were struggling to grasp a world without him in our lives. It was a sad day and his passing is a great loss to many, many people.

Introduction
I first met Johnny, in 2000, at the Twiggs Green Room open mic night. It took me a few open mics to even recognize that he was “in charge.” Other people would show up first, start setting up, and get performers signed up for the evening. Johnny just seemed to me to be the sound guy (and at the time I didn’t think that was a very important job!).

Johnny and I became friends because he suggested that we play some music together and jam out songs. He’d play bass. I was eager to play my songs and although I didn’t think having a bass player would make any difference, I was encouraged that someone took an interest in what I was doing, musically. It was the first of many times that Johnny would provide me with encouragement and direction as I fought to make a connection to music.

A Generous Exchange
Johnny, as it turned out, was a profoundly talented and skilled musician. He elevated my songs with his bass playing. In the early days as a singer-songwriter, he was also my pal on stage and I learned to feel more and more comfortable on different stages because he was with me.

Nothing phased him. We’d get to the gig and he’d tell the sound guy how to fix the feedback in the monitors, and I appreciated how gently he would help everyone do better–myself included. As the band grew, I realized that he had talents and skills far beyond my original assessment. Johnny could offer good advice to everyone–the keyboard player (of course), the drummer, and so on. Looking back, I think he must have been extremely restrained in his critiques. He was, after all, acutely aware of everything happening on stage–from the quality of the instrument cables to the ideal bass fill to play right before the chorus. Then, at the end of the gig, he’d instinctively know which of us was feeling the most vulnerable and he’d say, generously, “you were the best one”.

Johnny came to San Diego in the mid-1990s. He visited and basically never went home. Of course he loved the warm weather and the laid-back lifestyle (which suited him perfectly). But, Johnny also needed the come-as-you-are ethos that the West Coast offers. His plan was to NOT have plans. His outlook was a more natural fit in San Diego than it was in New Jersey, where he grew up. He loved his family and he had many fond memories of growing up in New Jersey and playing gigs in the city. But, for day-to-day living, Johnny felt at home in San Diego.

As musicians do, Johnny sought out other musicians once he settled here. He followed the breadcrumb trail to a group of musicians who were performing at Twiggs in the very early days of the Green Room. He helped that seed grow by befriending many great musicians and by nurturing many more up-and-comers. Over a few years, the Twiggs Green Room developed a wide appeal and reputation as a hub for singer-songwriters. Every week, there were shows on Thursdays, Fridays, and Saturdays. Singer-songwriters would gather in a group of 30-40 every Wednesday night to play at the open mic. Although playing gigs on the weekend was a goal that many singer-songwriters aspired to, the open mic was not to be missed. In fact, the open mic was my favorite part of the whole Twiggs Green Room experience.

Over the course of the night, Johnny would play piano with practically anyone who would let him. After you started your song, Johnny would watch your hands on the guitar, figure out the key and chords in his head, and start improvising an accompaniment. For me, those moments of playing music in the Twiggs Green Room with Johnny on piano will remain some of the most enriching moments that I’ve had as a musician. He would quietly elevate my songs by adding tasteful layers that taught me a great deal about the elegance of melody and harmony. He made me better than I was and showed me that music can transcend the instruments and the egos and even the moment. I learned so much about music from playing with Johnny and so did many, many of my musical friends and acquaintances at the Twiggs Green Room.

Living Memorial
The last time I saw Johnny was just before Christmas. I went to pick him up for lunch and he showed me all the plants on his porch. I teased him for having so many outdoor lights that the fire department would charge him a fine. He laughed and explained that he and (his wife) Dawn liked to do their flower arrangements outside and that they needed lots of light after the sun went down.

I love the idea of Johnny of doing flower arrangements in the middle of the night. He didn’t do things in the typical way, but once I became familiar with Johnny’s way, it always seemed like the better way. I’d think, “Perhaps I should make my flower arrangements at night?” He made beautiful arrangements. He could make anything into art–flowers, music… and, ultimately, life itself.

Thoughts from a Truck Stop

Nathan Raney: A Beat Farmer’s Son Sows His Own Seeds