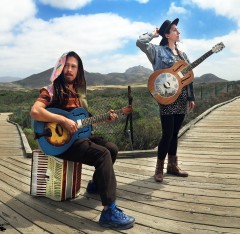 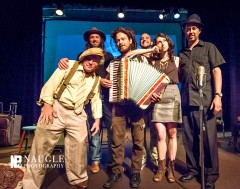 After a week and five inches of rain, only a few puddles remain, full of leaves, in front of the Poway Branch Library. Off to one side of a courtyard in the handsome Spanish-style building is the meeting room where Nathan and Jessie are setting up to play. The vaulted ceiling rises easily 35 feet above bassist Trevor Mulvey, who is standing in front of the white board where the artists have drawn caricatures of themselves with their names. Forty or so people are ready as Nathan Rivera steps to the front with his blue National resonator guitar and 18-inch dreadlocks, and Jessie Andra Smith takes the other mic stand with a natural wood-painted National. Rivera starts by wishing the audience a “Happy New Year.”

Both musicians are from Temecula, though their roads to a musical career have differed. Rivera is from a musical family and was exposed to music early and often.

“I was a kid, and I played bass and was in all these punk bands. Then, as I grew older, I got a classical guitar and started writing songs and liked the Beatles. I really learned a lot from friends who got into old-timey blues, bluegrass, and stuff like that. They were all about traveling, riding freight trains, and playing ragtime guitar–I definitely got a big influence from them.” The gypsy influence can be heard in his guitar style, blending the remarkable sound of the National with a fast-pick, short-chord/scale assault right out of the Django Reinhardt playbook.

While coming from a different place, Smith definitely felt a big influence from Rivera’s playing, while developing a musical voice of her own. She started playing guitar at 12 years old after hearing a Jimmy Page solo on a music documentary.

“I loved classic rock. And from there my tastes evolved and I started listening to country blues–I wanted to play that kind of style and I had a mentor who was really great at finger picking. I had heard of Django Reinhardt and that gypsy jazz music but had never really heard its full extent, and Nathan was doing something unique with the influences of that. That became something that I loved and I wanted to play.”

Rivera was learning his craft while leading a wandering minstrel-type existence, playing music as a street musician and with friends that included many who now play the busker scene in New Orleans.

“For me street performing is something I have been doing for a long time; it’s how I started making money. It’s how I met Jessie also. Before I played accordion, I had a guitar and I’d go up and down the West Coast to spots I’d heard about but had never been to. Getting other people to go with me, and we’d hitchhike or ride freight trains–we were going on adventures.”

These trips included appearances at festivals and eventually led back down to Southern California, to a farmer’s market where he met Smith, who was selling her art, about six years ago.

Rivera had also played with a friend and musician, who pioneered with him a duo sound featuring two National Steel resonator guitars.

“My friend Shine Delphi and I travelled all over the country and the world playing music; I had a Blue Ridge–just a wood body acoustic guitar–and he had a National, and we would play together. His guitar was so loud, way louder than mine, so I wanted to get one so I could start playing with him. So he and I started playing two Nationals together, probably around five years ago.”

While his first National was from Craig’s List, both Rivera and Smith have more recently visited the National factory, where Rivera was gifted the blue model he plays on stage by the company, a rarity.

Their eclectic sound has come through on two CDs (including the recent If I Could I Would, in the November 2015 issue), both overflowing with original songs that come from folk, country, jazz, and even blues and pop sources. The potpourri of Americana flavors samples from their respective backgrounds, as they share the songwriting.

“I like so many types of music. I think what depicts the types of music I play is the instruments and also the environment. Slide guitar is a good sound, especially on the resonator, so I started playing slide for country music and Hawai’ian music–whatever has that sound. The same with the accordion; it has a nice gypsy sound.”

“I write my songs just walking around a lot; it depends on where I am but I do a lot of traveling and a lot of walking. I’ll have my guitar on my back and my accordion on my front. I’ll just play my accordion and just improvise and just flow–sing or hear a melody, play with it, and sing it. Same with guitar.”

For Smith, the process differs. “We write our songs individually. We’ll show it to each other and from there, if we’re going to play it live, we’ll learn each other’s songs and it evolves. What I always like is that we both have a different perspective; it’s a male and female perspective on life–and you can hear that through the music. What’s cool about being in that dynamic with Nathan, is he has a really great arranger’s perspective. He can hear a song and hear what it can become with the whole band.”

While Mulvey is a fixture of their appearances in Southern California, Nathan and Jessie have traveled to the Northwest, Mexico, and Europe over the past few years, and two days after the Poway gig, they were set to start a tour of Colorado.

“My first trip abroad was two years ago,” Smith recalls, “And it was amazing getting to see a whole other culture–Europe and Mexico. Mexico is an amazing place where the people are so warm and they love to hear music. We’ve had a great time playing on the streets there. France was just as amazing, a whole other type of experience.”

Rivera, with experience busking abroad, had a “back to the roots” experience in 2013 when friends and fans Rosie and Manuel Rivera (no relation), both originally from Mexico, inspired him to explore his family heritage by visiting Mexico. He played in clubs and theatres in Mexico City, but also in smaller towns.

“We started busking on this little street corner, and we formed the hugest crowd of so many people, all standing there-partly confused but so amused.”

It was an experience repeated by Smith in 2014, visiting an area of her ancestors.

“I think my favorite experience was that I went to Latvia, where my grandparents were from. We came to find out we still had family living in the country. Last year I went and visited them, and I got to meet all of these relatives I had no idea I had; the coolest experience was playing this tiny coffee shop and 60 people came out to see–I got to play for all my relatives and it was such an amazing experience.” Sometimes globetrotting and good-time music bridges both generations and borders.

As Rivera, Smith, and Mulvey start playing the opening song the immediate reaction is quiet amazement from most of the audience. The three combine for a strikingly tight and smooth combo sound–it fills the room as Smith strongly sings a swing jazz number with words about seeing stars in the daytime, while Rivera shreds through some ear-catching gypsy licks, then gives Smith a turn so she can lay down some swift scales as well. It is crowd-pleasing stuff. The first few tunes give Smith a chance to sing a French tune, Rivera one in Spanish, and then a crowd sing-a-long. It is clear from Rivera’s upbeat, crowd-friendly stage patter and the pair’s easy execution of contrasting styles that plenty of street busking experience has taught them a lot about bonding with an audience and projecting a positive vibe.

Smith is singing a touching country ballad she wrote, “The Player’s Daughter,” and Rivera’s slide guitar fills are played like a lap steel player, from the bass strings down. Several songs with swing-jazzy heartbeats and lots of seventh chords are on the menu, as the combo feel generated by the three on tune after tune again is greatly helped by the way Mulvey’s smooth bottom blends invisibly with the strong presentations by the other two. One of the simplest tunes is also one of the catchiest, about Rivera’s bike and, like the others, with it comes a story.

On the last few tunes friend Steve Cochran is playing trumpet as a guest and, true to form, the first track, “A History on Lost Art,” from their eponymous debut CD, has a bridge built for a hatted trumpet solo, and it sounds great. The augmented trio then move through the gypsy feel of a 3/4 time tune, “Real Far Away,” before an encore that everyone in the room wants.

As a group, Nathan and Jessie have already done quite a bit of touring and recording, but they aren’t ready to slow down just yet, in either area.

“We like to record with our friend Nathan James,” says Smith. “He’s worked with us a lot; we’ve been recording some music and hope to have a new CD out really soon. And touring, we’re first of all going this month to Colorado for a small tour, and later in the year we have a tour planned where we are going to go to the East Coast–but first at the Blissfest festival in Michigan. That will kick off our summer tour, and I think we’re going to make some plans to play in New York and Pennsylvania and maybe even fly to Europe after that.”

Rivera adds, about the recording process, “I wanted to give some credit to my friends who play with us and make our music that much greater. Karl Kummerle played the fiddle on our [last] album; he’s amazing. And another of my friends from New Orleans, Milly Raccoon, played on some songs for this upcoming one. They are both just amazing people and songwriters and musicians. And Trevor Mulvey, who is the bass player with us, is a great binding person; without Trevor there would be no Nathan and Jessie.”

Their best and favorite local gigs have been at the Belly Up and small North County clubs, but this is a band that enjoys the direct connection between artist and audience, which comes through best during live sets. They bring a flavor seen mostly in New Orleans street musicians to both their sound and their presentation.

If they have a mission statement, maybe it would be something like Rivera’s: “I feel like just the main goal for me and the group is that we like being creative. We both paint, we both write songs and sing, and we play all types of instruments. I feel very grateful to have the opportunity to share my art with the world, my music, and the words, to be a positive influence on people–for a better place.”

A World of Possibilities for Rhea Makiaris

After 18 Years, a Music Era Ends as the 7th Day Buskers Play Their Last Sunday at the Hillcrest Farmers Market