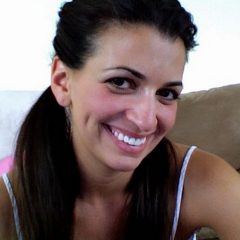 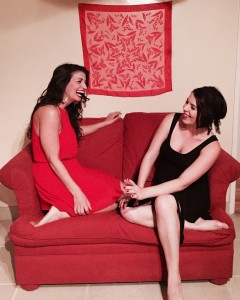 Rhea Makiaris has always seen possibilities. For the San Diego-based singer a sense of adventure and trust in what life might offer have taken her from New York to Hawaii, and have seen her cruise the Caribbean. Though much of the rest of the world has experienced her music, we San Diegans can feel lucky that this dynamic performer makes her home here.

Whether she’s singing with a band, performing with one of her collaborators, or simply going solo, just singing and strumming her guitar, Makiaris can be found on the stages and cafes throughout San Diego. A sold-out room greeted her and collaborator Whitney Shay for a recent inaugural performance at 98 Bottles, and last month she performed for an enthusiastic audience at Point Loma’s Wine Pub.

“And I just moved into the same house where Simeon Flick lives,” Makiaris says. She and Flick, the San Diego singer-songwriter and Troubadour contributor, have known each other for the last ten years. “It’s great being around talented people. I’ve known Simeon since I played a gig with him in Encinitas when I lived up there,” says Makiaris. “San Diego is filled with these wonderfully talented people. They’re really cool and it’s so funny that they are so modest about what they do.”

If anything, Makiaris is versatile. She can put the shine and polish on a Broadway show tune or heft a boatload of soul into a Motown number. Her voice can be sweet, light, and agile as she caresses a sweet love song or earns comparisons to Bonnie Raitt when she raises the rafters with a barrelhouse blues.

Makiaris was born and spent her early childhood in the manufacturing town of East Hartford, Connecticut, moving to San Diego with her parents while still in grade school. Her first musical influence was her older brother. “He’d listen to something and then play it on the piano. He did everything by ear,” she says. “I’d watch him and see how he’d do things then I’d try them myself. And both of our parents were very supportive of my brother and me with our music.”

For high school, Makiaris and her brother attended the San Diego School of Creative and Performing Arts, but she spent her last two years of secondary school at Our Lady of Peace, the Catholic girls school in Normal Heights. “It was still good for my music,” she says. “At the School for Creative Arts I was one among a lot of other music students, and in a way I was a big fish in a small pond at OLP. I got to play Annie in Annie Get Your Gun. I was in The Sound of Music and other productions, too.” The teen also involved herself with her church choir and earned a singing scholarship at the University of San Diego.

Reflecting her Greek and Italian heritage, Makiaris has expressive dark brown eyes and curly black hair that flows past her shoulders. If she told you that she was related to the beautiful opera singer Maria Callas, you’d believe her.

She put together her first band, Rhea and the Octopus, in 2001, with the ensemble performing around San Diego County for the next five or six years. Afterwards, the Octopus turned into an acoustic trio called Scratch. She recorded her first CD, simply titled Rhea, back in 2008 with Sven-Erik Seaholm. Her second recording project–once again a simple and pretty obvious title, Number Two –came out in 2014. Makiaris continues to record, but the idea of putting out CDs has become a dated concept for her. She says, “With the way things are now, you don’t have to put out a CD anymore. I can now come out with a song at a time and people can download that song if they want it.”

Work on music comes in fits and starts. Makiaris works on music for a while, then she’ll take a break. “It’s not that I’m waiting for my muse or waiting for inspiration, but I just need that time,” she says. When she writes a song, the concept, what the song is about, comes to her first. She then writes down the idea and sums up that idea with a line. “Then there are melodies that I’ve come up with. I see how the line works with this melody or that melody. It’s almost always that the chorus comes first. Then I work with the verses,” she says.

For material Makiaris has almost always looked inward, sometimes relying on the creation of a song as a catharsis for a breakup or other emotional event in her life. Her most recent composition, one about her family, is a departure from this formula. “I wrote a song for my aunt and uncle, who were celebrating their 50th wedding anniversary,” she says. “These are people who have everything. So what do you get them? That’s why I wanted to make this song for them.”

Among Makiaris’ most prominent collaboration projects is her work with singer Whitney Shay. Although the two singers met at a house party a few years back, they have only recently started performing together. Makiaris says, “We had become friends on Facebook. Whitney is always looking to collaborate with people. So years later after we’d met, she put out a post: ‘Who wants to collaborate on some music?’ and I said, ‘Yes, let’s give it a try!’ This has been great for me. I’ve always worked with men, so it’s really cool to be working with a female musician. Once we got together we started talking and found out that we had so much in common besides music, our similar life stories, that’s why we call ourselves the Same Dames.”

Makiaris works as an interpreter for the deaf, and when she talks about her day job, she waxes as much as when she talks about her music. “It’s never boring. And it’s a constant challenge!” she says. “It allows me to be creative. It also gives me the flexibility to pursue my music.” Her work takes her to colleges, hospitals, and even music classes. Every summer she interprets at Comic Con, and has worked for deaf clients on Caribbean cruises. Makiaris took American Sign Language for her language credit while she attended the School of Creative and Performing Arts, a bold move as this was before it was accepted as a second language credit everywhere else. She majored in deaf studies/interpretation at Cal State Northridge. “I love languages, and I just took the sign language class in high school for fun. I didn’t know that it would be my career for the rest of my life,” she says.

Makiaris remarks that there is a great deal of misunderstanding of the deaf community by the larger society, that they can do most of the things that other folks can do, such as driving a car. “A lot of people feel sorry for people who are deaf, but these people lead happy, full lives,” she adds.

After a transitional time in her life, Makiaris headed off to New York City. Her outlook of striking out and letting the universe work for her worked well. She loaded up a van and headed off across the country with her father. “I was literally heading into the city when I got a text from a friend of a friend who said that she had an apartment to sublet for me. It was right in Brooklyn Heights. I thought that I wanted to live in Manhattan but Brooklyn was just great. I found a lot of places to play. I found a great Bass player to work with, too.”
After two years in Brooklyn, on the first of January, always a day guaranteed to be pretty darn cold in New York, Makiaris received a phone call from friends in Hawaii. The couple had just had triplets. During the phone call the idea developed for the Brooklyn resident to move to Hawaii, with work as a nanny taking care of the three newborns. She says, “It was a lot of work, and I only lasted nine months. But I did learn to play ukulele while I was there.”

In 2012 Makiaris toured the United States for two and a half months. She put the word out through friends and social media that she wanted to put together a tour. She found cafes to play and folks willing to host house concerts in different cities. She first made her way up the coast to Vancouver; after that she headed east, with performances in Texas, New Orleans, Memphis, and the East Coast.

Makiaris is presently planning a European tour, which will probably take place this August. “It’s good to keep doing things and moving on,” she says. “Things have always turned out for the best, and I’ve had the best experiences, when I’ve just gone and done what was the next thing to do.”

See Rhea this month at the following locations:

Nathan and Jessie: After the Deluge