January 2023
Vol. 22, No. 4
MohaviSoul Branches Out by Frank KocherAugust 2015
Back with a Bang! Java Joe's Reunion at San Diego Folk Heritage by J.T. MoringAugust 2015
Book Review: The Philosophy of Modern Song by Bob Dylan by Ted BurkeAugust 2015
Rick Nash: Bass Man in Demand by Wayne RikerAugust 2015
Mod Revivalists the Trebels to Reunite for 40th Anniversary Show by Jim TrageserAugust 2015
If Music Be the Food of Love, Play On: Dually Noted Pairs Fine Food and Fine Music by Paul HomiczAugust 2015
Harold in the Land of Jazz by Bart MendozaAugust 2015
Sephardic Dance and Music by Yale StromAugust 2015
Loretta Lynn: A Special Tribute to the Queen of Honky Tonk by Terry Paul RolandAugust 2015
Ben Grace Gilmore: It's All About Building Community by Sandé LollisAugust 2015
Advertisements 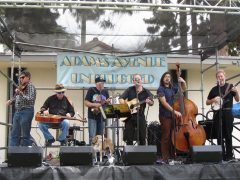 The local Americana band grew out of a 2012 meeting between two veteran bluegrass musicians, Randy Hanson and Mark Miller. Almost by accident, they discovered that they had more in common than being handy on a fretboard; they both wrote music and were ready to move beyond the confines of bluegrass and gospel to other acoustic forms.

“Randy and I both joined the San Diego songwriters meet-up, we both happened to be members. Cathryn Beeks does this thing called ‘the Game,’” Miller recalls. “They give you a song title that you have to write a song to. Randy and I collaborated on our songs, and both songs had the same title since they were ‘game’ songs. Both were called ‘Every Second.’”

“Yeah, I was really surprised by the reaction we got when we played those songs, they went crazy,” says Hanson. “We’ve got something going here, let’s take this further and see what’s going on.”

Putting together a band also involved Beeks and her group. Miller recalls the process.

“They have a house band, and two of the members of our band; Jason Weiss, who plays banjo, and Orion Boucher, who plays bass. Both played in that band.”

Hanson and Miller recruited Boucher and Weiss, and after John Mailander played fiddle on their second EP, the jam sessions Miller attended with Weiss in Encinitas led to the addition of fiddler Dan Sankey, another established veteran who plays anything with strings.

Miller explains how the band was rounded out: “We met Will Jaffe, who plays dobro with us, up in Bakersfield at the Great 48 Jam. A good dobro player is hard to find, and Will brings a lot to the band along with lots of contacts and a lot of songs. “Will is another Berklee School of Music graduate and another killer musician.

“We’re excited to have the guys in the band. They’re are all multi-instrumentalists, incredibly well-trained, and they have really interesting and different backgrounds. The arrangements are outstanding, so we don’t typically rotate people in and out. This is our six-man lineup and we try to keep it that way to get that full and diverse sound.”

Guitarist Miller and mandolinist Hanson do the lead vocals and both write original songs, but their origins and influences vary widely.

Miller recalls: “I have a lot of different kind of roots than a lot of other people. I was born in Wheeling, West Virginia and was raised in the Ohio valley right across the river from there. Unlike a lot of the guys in the band, my parents weren’t musicians. So I learned to play guitar — lessons and things — and really liked playing and writing songs; I went that whole route. I came from Appalachian roots, sitting around a campfire singing songs and people just loving it.”

For Hanson, “I’m kind of the other side of that; I’m a fifth generation Californian and both my parents were professional musicians. My uncle is a professional musician, and my cousin was a Grammy-winning bluegrass great: Laurie Lewis. So it kind of runs in the family a little bit, I hope. So I got exposed to a lot of the big band music and jazz. My dad used to play with Count Basie and knew Duke Ellington and Nat King Cole, so we had a lot of that going all of the time in my house.”

The two had a band and influences, and an idea of what they wanted to play. How about a name? MohaviSoul. Miller explains, “That idea of the high lonesome sound of bluegrass, kind of Jimmy Martin, with a lonesome desert kind of idea — along with the fact that I consider myself, and Randy also, more soulful singers.”

“We’re really trying to get the blues and soul sound back in, the feeling of it,” says Hanson. “That really comes out when we play, you can hear it; we play with passion. You hear that we are involved in the storyline of a song, and that’s the soul.”

MohaviSoul’s music defies being pigeonholed, which is the way they like it. They brew an eclectic blend of styles that can take them out of traditional or even contemporary bluegrass territory, while they are capable of playing both of these.

“Our roots and influences span folk, jazz, bluegrass, hip hop, rock, and soul,” Hanson says. “So we all bring these genres to the mix and blend up something that is not quite contemporary bluegrass and not quite Americana.”

“We do keep some of the really great elements of bluegrass and we can play straight up bluegrass or Gospel, which we do in our shows. Having that instrumentation and having those three and four-part harmonies are what I call ‘coolgrass.’ We’ve been experimenting with a lot of other aspects of music and different styles. We play everything from straight-up bluegrass to gypsy jazz to soulful ballads all in one journey of a show. Even at the Route 66 Bluegrass Festival we played Django Reinhardt’s ‘Minor Swing.’ People really liked it, they were, like, wow.”

Miller likes bluegrass instruments as well. “I like to think that we’re in more of a roots music or Americana direction. Traditional people in particular can be very strict about what they consider to be bluegrass music, but we get a good response from a much wider demographic than when we just play bluegrass festivals.”

“We’ve actually written quite a few songs that have leveraged off this great thing that Cathryn Beeks calls the ‘Game.’ Many times it will just start with a song title,” says Hanson. “For me it can go either way, I can get part of a verse down and it kind of sets the meter, and I’ll get the story line going and try to put a chord progression to that. Usually, for me, it sometimes comes all at once, it comes flowing out of my head, as fast as I can write I get it down, which is kind of freaky.”

For Miller, it is different. “My process doesn’t come all at once at all. It kind of comes from both angles, too, but I have a notebook that I carry around all the time. If I hear something interesting or unique, I jot it down. The other thing that I use is a voice recorder app on the phone. If I get a little melody or I wake up in the middle of the night I’ll hum it into that, or I’ll play a chord progression into that.”

“The band has released two very good EPs: Every Second in 2012 and Blue Diesel in 2013, both produced by Jake Skolnick on the Mannequin label. They both feature assured instrumentation — Second includes Reinhardt’s “Minor Swing” and, at times, wickedly clever lyrics either telling stories of love, and outlaws. In the title tune from Diesel, a train puffs pot smoke.”

“We also have a new disc underway. Our last two recordings were EPs, but this is going to be more full length with new, original songs,” Miller says. “We also did our last two recordings live, meaning we all got in one room and played on different tracks. We’ve been working on the material for about a year.”

They have been guests on Beeks’ Listen Local and Wayne Rice’s KSON radio program and will be part of an upcoming documentary film on San Diego bluegrass, filmed by Rick Bowman.
They are hoping to do a mini-tour on the West Coast. Here in San Diego, the band has been well-received, playing a wide variety of venues that vary from weddings to bars to festivals. Still, finding places to play for a six-piece acoustic band presents special problems.

“Finding good performance venues can be a challenge. It’s a little bit of a hard sell to come in and say, ‘Look, we’ve got a six-piece acoustic band — banjo, dobro, and fiddle,’” says Miller.

“We’re good at bluegrass festivals and street festivals. We did the Adams Avenue Unplugged thing, but we’re also willing to play bars and clubs.”

A recent gig a Winston’s in OB found them following a loud four-piece rock outfit. The audience loved the contrast.

“The place just filled up,” Hanson says. “It was crazy; you could barely stand in there. I think we surprised a lot of bar-goers.”

“But then right after us, another rock band took the stage and everybody left and the place cleared out,” Miller says.

MohaviSoul has not been totally unable to find bar gigs, though. They have pending and past gigs at Jimmy Love’s and the Tin Roof downtown, played regularly at the Office in North Park, and were regulars at the Duck Dive in Pacific Beach. Miller remembers one night there.

“We were playing in this bar in Pacific Beach and I’m there with Randy, you know, playing the mandolin. I’m on banjo and upright bass. This young girl yells out, ‘Play some country!’ And I was like, ‘I don’t think it gets any more country than what we have going on here.’ I think she thinks it is Taylor Swift or something.”

Both feel that one thing that sets MohaviSoul apart is the good vibe within the band.

“There’s really good chemistry in this group,” Miller says. “When you see us live, we really enjoy each other and have a good time, sometimes too good of a time! Our band members who are in other acts enjoy playing with this particular lineup.”

Hanson agrees. “You know, rehearsals are a great hang. To have people that really want to play together and create music together — especially new music — is really special.”

The Blues Ain’t Nothin’: But a Feelin’ Getting Down ‘n’ Gutbucket at the San Diego Blues Festival

The Sun Shines All the Time Here: Barbara Nesbitt Returns for Reunion Show