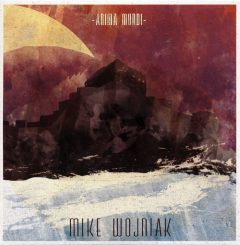 Local Indie performer Mike Wojniak is a Columbus, Ohio transplant who has been developing his sound since 2008. His full-length 2012 CD Libero featured interesting arrangements of ethereal ballads with plenty of cellos and layered keyboards, and he is back with a four-song EP, Anima Mundi, again with a Latin name and big sonics. The wall of sound on the disc mirrors the thick mix of guitars, electronics, and orchestration now familiar on the albums of Radiohead and Coldplay; fans of these bands should feel right at home with Wojniak.

Opener “The Stone and the Sea” sets the tone as Wojniak, awash in a sea of echo, cellos, synth, and guitar reverb, vocally resembles Coldplay’s Chris Martin laying down soaring lyrics: “Lie supinely, divinely, finally/ We are one again, we’ve found what we’re looking for/ If we can only reel it in.” The huge scale of the arrangement works really well, infusing the song with power, a disc highlight. “Tidal Wave” backs off the throttle a bit with a more ethereal approach that accomplishes an ambient feel, but it doesn’t have a memorable hook.

The disc wraps with “Oak Tree,” a tune that has falsetto-anchored, high-flying choruses but comes down to earth for verses that are more or less guitar/ bass/drum (with plenty of keys of course), and catchy. The dynamics are a winner, and though the lyrics are a bit tough to make out, the sound clicks just fine.

Mike Wojniak’s Anima Mundi is interesting Indie rock for those who don’t like their music stripped down.