January 2023
Vol. 22, No. 4
Mary Chapin Carpenter: We Remember Moments Not Days by Terry Paul RolandJune 2022
Back with a Bang! Java Joe's Reunion at San Diego Folk Heritage by J.T. MoringJune 2022
Book Review: The Philosophy of Modern Song by Bob Dylan by Ted BurkeJune 2022
Rick Nash: Bass Man in Demand by Wayne RikerJune 2022
Mod Revivalists the Trebels to Reunite for 40th Anniversary Show by Jim TrageserJune 2022
If Music Be the Food of Love, Play On: Dually Noted Pairs Fine Food and Fine Music by Paul HomiczJune 2022
Harold in the Land of Jazz by Bart MendozaJune 2022
Sephardic Dance and Music by Yale StromJune 2022
Loretta Lynn: A Special Tribute to the Queen of Honky Tonk by Terry Paul RolandJune 2022
Ben Grace Gilmore: It's All About Building Community by Sandé LollisJune 2022
Advertisements 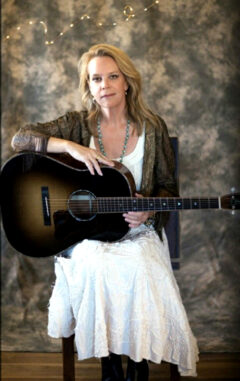 Back when she was a young girl on the brink of a bright road to musical success, Mary Chapin Carpenter was in a car with friends going down a dark road at one in the morning. It seemed her entire life was ahead of her. She leaned her head back, closed her eyes and “Wild Horses” by the Rolling Stones came on the car radio. In the epiphany of that moment, she knew she was simultaneously free and lost. The lyrics, especially the chorus to the song, drew her in like a rope to a native, wild Palomino. There was joy and sorrow side by side in her heart in this timeless moment. Illuminated in her soul was her path of life and the years that would follow.
This moment is captured in the title song from her 2020 release, The Dirt and the Stars, which includes a masterful collection of songs that yields with it personal and universal insight like this one. And, indeed, the chorus of the classic, “Wild Horses,” rings true as the listener remembers and knows no one can drag us away from these critical moments in our lives. Nor can we let an album like this fade into the background.
In an interview recently published on her website, Carpenter further describes her impressions of the pivotal song “Between the Dirt and the Stars.”
Fast-forward to where I am now. I’m still in one piece, and I still believe that most people are good. I still believe in the innocence of first love, perfect songs, and a sweet buzz from a can of cheap beer. Everything I’ve ever felt, every place I’ll ever dream of finding, as well as every place I’ve ever been, can be found in a trance-like memory of riding in a car on a hot summer night listening to the radio.
Mary Chapin Carpenter sings “Between the Dirt and the Stars.”

There so many noisy voices in the recent world at large. With empty promises of “thoughts and prayers,” they are shrill and defensive as children needlessly die at the crucible of political ideology. But there’s another voice that call us: those of musicians, poets, and artists. They carry voices of reason, healing, compassion, empathy, understanding, and a sense of beauty rooted in their visions, and in their words and music.
No singer-songwriter alive today carries this as soulfully and authentically as Mary Chapin Carpenter.
It is her voice, in all the dimension of meaning of the term, that carries her 30-plus year cycle of albums, gifting her audience with skilled songwriting, rich production, and music that is as soothing as it is engaging. During her career she has made music that can make us dance and hypnotically sway to her lyrics that often border on poetic literature at its best.

Carpenter on tour with Shawn Colvin, 2013.

Although her days of multi-platinum selling hit songs are long behind her, over the last 30 years since she championed the country and pop charts, she has produced work that has enlarged her legacy, as she has opened musical doors that bridge meaning and poetry to folk and country idioms while keeping a solid fan base happy with her richly satisfying albums and concert performances.
During the ’80s and ’90s, her hit songs crossed over to mainstream pop music charts. Her hit songs have included a classic cover of Lucinda Williams’ “Passionate Kisses,” “He Thinks He’ll Keep Her,” and “Down at the Twist & Shout.” A survey of her albums since 2010 have consistently sold well on the country and folk charts but, more important, they have portrayed an artist who continues to grow in all areas of her art.
Carpenter’s accolades are many over the years. So much so, that she appears to be on a direct path to induction into the Country Music Hall of Fame, which is an honor that has yet to be awarded to the singer-songwriter and trailblazer who helped merge country, rock, and folk music into what today is called Americana music.
Most recently, in 2012, she became one of 15 women to be elected into the Nashville Songwriters Hall of Fame as she joined the company of Loretta Lynn, Dolly Parton, and Cindy Walker. She has also won five Grammys, two Country Music Association (CMA) awards, and two Country Music Awards.
Even so, Mary Chapin Carpenter has experienced her share of challenges over the years. This has contributed to a deepening of her songs. In 2007 she was diagnosed with a pulmonary embolism, a life-threatening lung disorder. In the years of recovery that followed, her father died and her marriage ended in divorce. As she said in an interview with Nashville journalist, Robert Oermann, “A divorce is like a death.” Remembering her father’s passing, she said, “I wrote him a letter that thanked him for everything he had done for me in my life. He made feel it was a noble thing to want to be an artist in the world. I wanted him to know how grateful I was for that.” 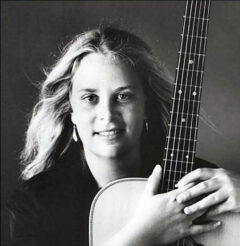 In the beginning, Mary Chapin Carpenter in 1987. Photo by Tom Wolff.

From early childhood her parents were an important part of her musical influence. Her father, Chapin Carpenter Jr., was an executive for Life magazine in Washington D.C., but for two years of Carpenter’s childhood, the family lived in Japan. Her mother, Mary Bowie Robertson, was a natural musician who loved the folk music revival of the late ’50s and early ’60s. She passed her love, talent, and guitar skills on to her daughter. According the interview with Oermann she played her mother’s bass ukulele and then advanced on to her gut-string guitar.
Her years of health challenges and loss, between 2007 and 2012, her songwriter’s impressions of the time were captured in her 12th studio release, Ashes and Roses (2012). It represents another corner turned in a songwriting career that is known for songs of grace, empathy, and compassion. This is when her songs became personal and intimate.
But, in the end, there is always her voice—hers is one of wisdom and a voice that not only survives but thrives to create and bring her own sense of peace to a troubled world. Today, in a time of divisiveness, war, tragedy, and mindless politics, Mary Chapin Carpenter’s voice continues to inspire, heal, and comfort.
She now lives in a Virginia farmhouse where she continues her lifelong process of writing and recording her songs. Accordingly, she carries on writing songs, she is today doing what she was raised to do. This has carried her through the Pandemic years, a continuous line of creative flow of empathy and compassion.
As she said of her songwriting process in an in-depth interview on her website:
It’s remarkably the same. I still sit down with a yellow legal pad and a pencil and eraser, and guitar sitting in my lap. I work at my kitchen table. It’s where I am most comfortable writing. The writing process remains as fascinating to me today as it did when I first began writing as a teenager; the excavation, the digging through things that become an exploration of life. It’s the most satisfying thing I know. And she continues reporting that she still goes for “song walking.” Of this, she says, 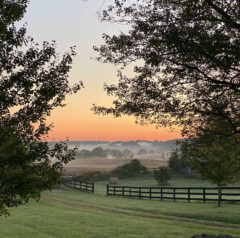 Yes, living here where I can walk for miles and never see another soul, it’s a big part of the creative process for me— being outside, riffing aloud as I walk, and editing in my head.
Carpenter’s last two albums have been recorded at Peter Gabriel’s Real World Studios, which, by the way she describes it, is a songwriter’s dream of heaven. She explains,
It’s an amazing place. You can be completely immersed in your work 24/7. They feed you, they put you up, they take brilliant care of you, so that all you need to think about is the work you’re there to do. That is a genuine privilege nowadays, when technology permits us to email our parts and budgets limit our gatherings. At Real World, in the beautiful Wood Room, being able to be in the space all together playing live, recording head-on, singing live, no overdubs, it’s just sublime. That said, it’s incredibly hard, focused work, but it’s the best kind of hard work because it brings songs into being from every chair. And that just couldn’t have happened without all of us being in the room together.
The resulting albums, Sometimes Just the Sky (2018) and The Dirt and the Stars (2020), carry Gabriel’s upfront warmth, which is as characteristic a sound to Gabriel as Sun Records’ famous reverb-vocal echo slap-back. Both albums are sonically a departure from Carpenter’s earlier work, but there is no detour here in the ever-moving train of the songs of her life. But, it’s her concluding meditation at the end of the website interview that sings with her deepest voice.
Currently we’re all in our own minds, homes, rooms, captive in our own vessels. When we get to the other side, when we arrive on the opposite shore of all of this, hopefully we will remember where the good, the important things come from, where the empathy lives for ourselves as well as others. As has been pointed out by far more eloquent voices than mine is that while we’re trying to stay apart from each other, we know we have never needed one another more than we do right now. We are going to need one another even more when we gradually emerge back into the sunlight, blinking, wondering, questioning, worrying, fearing, dreaming, exhaling…we all hope that this is not going to last forever, but we’re going to be forever changed by it.
Italian poet, Cesare Pavese, once said, “We don’t remember days, we remember moments.” If this is so, then Mary Chapin Carpenter’s 17-year-old memory from the song “Between the Dirt and the Stars” is a moment that shines like a flame in in the deepest soul of her imagination; it shines like a forever burning ember.
Mary Chapin Carpenter will perform at The Magnolia in El Cajon on Tuesday, June 14, 8pm.

The San Diego International Fringe Festival is Back!